Professor Marco Peccianti's expertise lies in photonics – the core science of light and its technological applications. His interests span ultrafast photonics, terahertz radiation, optical complexity, nanomaterials, spectroscopy and laser physics – and he has authored more than 400 publications on these subjects. He has joined Loughborough as the Director of the Emergent Photonics Research Centre from the University of Sussex where he was Co-founder and Director of the Emergent Photonics Laboratory (EPic).

Photonics underpins advances across a range of sectors – including medicine, nuclear and renewable energy, and communications. Marco is a recognised leader in ultrafast nonlinear optics – crucial to nascent quantum technologies as well as optical computation and processing – and in terahertz technologies where his research supports developments in anti-counterfeiting and airport security. His latest work around terahertz four-dimensional microscopy has the potential to revolutionise material characterisation technologies.

You've probably never heard of terahertz waves, but they could change your life
"Almost every molecule has a 'fingerprint' spectrum in the terahertz frequency range" - making them ideal for detecting substances.

The Greek philosopher Plato believed that our eyes emit beams of light, enabling us to see. Although we now know otherwise, for me, it’s an inspiring analogy for how modern science strives to see beyond what is currently visible.

My research is in the fields of ultrafast photonics, terahertz (THz) imaging and the applications of THz radiation – technologies that vastly extend the range of what is normally visible to the human eye.

Many substances – including proteins, amino-acids, DNA and explosives – possess unique signatures (or fingerprints) that fall beyond the standard visible spectrum. They lie within the THz range – a challenging portion of the electromagnetic spectrum to access, lying between radio and light waves.

However, traditional THz imaging can’t discern anything smaller than a grain of salt, posing a real hurdle to advancing the technology – the "physical limit" observed by physicist Ernst Abbe.

Our research is addressing this limitation, so that we can overcome the obstacles to its potentially disruptive use – and begin to see beyond our current boundaries.

As an emerging non-destructive testing (NDT) technique, THz imaging has applications across a range of industries to test and analyse material samples and components without damaging the item examined.

What’s more, THz radiation is harmless to living tissue – and many everyday things like fabric, plastics and bio-polymers are transparent to it – making it a safe, non-invasive option for biomedical imaging.

It also has applications across security (complementing X-ray machines in detecting weapons and explosives) and within the food industry (to scan for contaminants) as well as in pharmaceuticals. It even has cultural uses, including the analysis of valuable artworks to date and authenticate them.

It was a proud moment, in March 2022, when my team and I secured Leverhulme Trust funding. It means we’re able to continue, here at Loughborough, the ground-breaking research we started at EPic – focusing on terahertz four-dimensional microscopy.

You could say I fell – rather fortuitously – into my scientist's shoes.

As a teenager, I digested a lot of science and technology, but had my sights set elsewhere. Following the lead of my father and older brother, I was fascinated by electronics. At 13, I built my first radio to listen to the CB band – at the time, an expensive portion of the electromagnetic spectrum. At least for my teenage pockets.

I went to a high school specialising in informatics because I was curious – and then, having been hooked, enrolled on a Masters in Electrical and Electronic Engineering.

My supervisor, Professor Gaetano Assanto persuaded me to join his project in Photonics. I didn’t see myself as a researcher but, intrigued, found myself enrolling in a PhD in Photonics.

A lucky decision, as it turned out. And, perhaps for the first time ever, the cat thrived on curiosity. By the end of my PhD, I was a highly cited author on solitons in liquid crystals. In fact, I’m proud to say, my papers are still considered still considered a foundational basis of the field.

In 2006, I secured a research fellowship at the Enrico Fermi Centre (Rome) on a project in biophysics and complexity, under the supervision of Giorgio Parisi.

I was awarded the EU Marie Curie International Fellowship on Terahertz radiation and ultrafast photonics, in 2008, and left Italy for Canada where I worked at the Institut National de la Recherche Scientifique (INRS) in Quebec with Roberto Morandotti.

On my return to Italy, in 2010, I joined the Institute for Chemical and Physical Processes (IPCF, Rome). A year later, I moved to the Italian Institute of Complex System (ISC), investigating terahertz and optical complexity – and was awarded my first major research grant.

It's now almost a decade since I came to the UK, having secured a post at the University of Sussex. During that time, I was delighted to progress from Lecturer to Senior Lecturer to Reader – achieving my Chair (Professor in Photonics) in 2017. I also co-founded and was Director of the Emergent Photonics Lab, the first centre at the University dedicated to ultrafast photonics.

The support of the School of Physics and Astronomy was pivotal in securing an EU ERC-Consolidator Grant (TIMING) for the development of a new form of terahertz imaging which allowed my team to achieve much to be proud of – including, for me, my election as an OPTICA Fellow.

It also shaped and bonded the research group that has moved to Loughborough.

Like many things in life, the move here is thanks to a serendipitous alignment of research interests and vision. The opportunity I’ve been given to advance my work and that of my team’s Early Career Researchers was an exceptionally strong motivator for me – indeed, for all of us.

Being able to catalyse the emergence of an endeavour much larger than any one of us individually is the reason we moved and reflects the promise we made to work together to drive our research forward.

My goals now are to apply technology to address a range of challenges the world currently faces – which is why I’ve always cultivated interests in different disciplines and sought the support of the many brilliant researchers who see beyond my limits.

I view Emergent Photonics as the idea that complexity (in Photonics) can be the connector between systems in different domains – quantum technology, biology, life science, communication and (more broadly) societal development. And, with my team, I’m really looking forward to rising to a new set of research challenges. 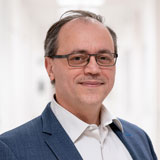 We are working at the forefront of emergent photonic properties in complex nonlinear optical systems.

"Eternal engine" to keep the next generation of atomic clock ticking