Dr Owen Davies leads a multidisciplinary research group that is investigating the roles of cell derived nanoparticles – called extracellular vesicles (EVs) – in musculoskeletal physiology and regenerative medicine. He has been awarded multiple external grants from funding bodies including the Academy of Medical Sciences and EPSRC, as well as a postdoctoral fellowship (EPSRC E-TERM Landscape Fellowship) for his pioneering work into EV therapeutics. Owen has generated some of the very first publications on skeletal EVs and their application in regenerative medicine. His research group is now pioneering EV-based solutions to combat real world healthcare problems such as tissue repair / regeneration and targeted drug delivery.

EVs express a complex arrangement of molecules on their surface that act like a biological postcode. This means that cells can efficiently transfer information to intended targets. Owen and his team aim to decipher this unique postcode to manufacture next generation drug delivery platforms for the treatment of clinically challenging diseases such as bone cancers.

EVs are small packets of information that are released by practically every cell type in the human body. These nanoparticles are approximately 1,000 times smaller than the diameter of a human hair but are packed with biologically active cargos that play a vital role in a range of biological processes such as tissue development and regeneration. Think of them as a highly coordinated delivery network for the transfer of biological material both locally (eg. between cells in a single tissue / organ) or over long distances (eg. between tissues / organs). Owen's group is particularly interested in how EVs drive communication between cells and tissues of the musculoskeletal system and how these processes can be hijacked to develop new therapies.

Skeletal injuries such as bone fractures and lower back pain are extremely common amongst the elderly and present a growing worldwide medical and socioeconomic burden, with over 150,000 osteoporosis-related fractures alone costing over £1.7 billion per annum to the UK economy. This number is expected to double by 2040, putting a tremendous strain on healthcare systems worldwide and severely impacting the quality of life of many otherwise healthy patients. It is essential that we invest in healthcare technologies that improve the physical wellbeing of the elderly population.

The Epidemiology of Osteoporosis

Skeletal muscle and bone are inextricably linked, with degeneration in one of these tissues having a direct effect on the other. We see this in bone (osteoporosis) and muscle (sarcopenia) wasting. For a long time, science has viewed the relationship between muscle and bone as purely mechanical with only a limited understanding of how these tissues communicate at a molecular level. We are addressing how these tissues communicate through the exchange of EVs and other nanoparticles.

Our research will not only provide some of the very first insights into how EVs drive communication between muscle and bone but could also identify unique biomarkers to monitor their health.

We also aim to understand how these nanoparticles can be applied for regenerative therapies. In my EPSRC New Investigator grant I am seeking to better understand the functions and therapeutic potential of EV particles derived from stem cells and cells of the musculoskeletal system. We want to exploit their natural binding properties by incorporating them in advanced biomaterial delivery systems with controlled release to drive a complex regenerative response that is comparable to natural tissue development.

The precise content of an EV depends on its cell of origin and the local environmental conditions in which the cell exists. By tailoring the external culture environment of bone and muscle forming cells, we aim to optimise the production of pro-regenerative EVs that could one day be applied to improve fracture healing, reduce back pain, or the effects of skeletal muscle loss during ageing. This can be achieved by isolating cells and culturing them in carefully controlled laboratory environments.

Simply put, EV therapies have the potential to provide a means of capturing many of the benefits of a cell therapy – in which viable cells are injected, grafted or implanted – while avoiding issues around reproducibility, scalability and storage.

Finally, the mechanisms through which EVs achieve the targeted transfer of molecules are only just beginning to be understood. My lab is starting to pick apart the biochemistry and biophysics of these particles to understand how natural EV transport mechanisms can be exploited for the targeted delivery of drugs and biologics to traditionally hard to reach diseases.

This is truly exciting science that is furthering our basic understanding of how cells and tissues communication at a fundamental level. It is also opening new avenues for site-specific drug delivery that could one day change the way we treat a variety of challenging and currently untreatable diseases, such as cancers.

Often, the problem is not a lack of clinically effective drugs. It is the ability to get these drugs to the right location in the correct dosage. EVs might be able to provide us with a naturally targeted vehicle for improving drug targeting in a range of healthcare priority areas.

I didn’t grow up in a traditionally academic environment, and was the first person in my family to go to university.

I completed my Masters (MRes) and PhD in Tissue Engineering and Regenerative Medicine at the universities of Manchester and Birmingham, respectively. In 2016, I was awarded a competitive EPSRC E-TERM Fellowship that allowed me to establish my independent research into EV therapeutics.

In 2018, I was appointed Lecturer in Molecular and Regenerative Biomedicine here at Loughborough – and was promoted to Senior Lecturer in 2021.

I’ve never been satisfied with accepting processes at face value and always want to question why and how things happen. This initially led me to become interested in philosophy, art and literature. But ultimately, I felt that science had the greatest appeal because it allowed me to really understand the world at its most fundamental level. Although, I have no doubt that my broader interest in the arts has helped me to develop a creative and adventurous programme of research.

I’m interested in developing approaches that support or enhance our body’s own natural processes of development and regeneration. These processes have been honed over millions of years of evolution and I think the greatest medical advancements will only be achieved through a better understanding mammalian development and physiology. I think we need to be truthful about how incompletely we understand our own biology and not be afraid to challenge existing preconceptions. Pretending otherwise will only limit scientific advancement rather than encouraging it.

For example, only in the past few decades have EVs been identified as important units in cell-cell communication. They were previously viewed as a relatively uncomplex mechanism of removing cellular waste – the so-called garbage bags of the cells. We are only now beginning to scratch the surface of EV biology and the considerable impact these particles will one day have in clinical science. I am delighted to be a part of this journey and look forward to what the future holds. 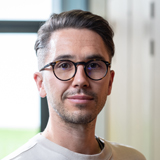 Owen is the first Loughborough researcher to receive this prestigious award.

Lifestyle for health and well-being