Dr Ali Bilgic's diverse research provides insight into issues spanning irregular migration, refugee movements, Middle East politics, European security policies and the rise of authoritarian regimes. His work is widely published, and he is the author of three well-received books - including his latest co-authored publication, Positive Security: Collective Life in an Uncertain World. He held the prestigious Prince Claus Chair in Development and Equity for two years (2017-19) – and has provided expert evidence to the UK Cabinet Office on a variety of issues around international relations and security.

Building trust in an anxious world

The past two decades have seen an increase in studies of the role and impact of emotions in foreign policymaking and international relations. Thinking about emotions – like anxiety, disgust, fear, mistrust, pity – in this context provides insights into international behaviour and events. Ali’s work is expanding the conceptual limits of work in this area, offering new approaches to international relations and security studies.

“Trust is a rare commodity in today’s politics. How can we rediscover it?”

I like to think that my research poses challenging questions and posits new ways of thinking about the diverse issues I explore.

A lot of my work – and the most visible in the public sphere – is around migration. I am particularly interested in how migration governance policies – ironically – generate insecurity for both migrants and receiving societies. I hope to develop alternative policies to mitigate such insecurity. As I rethink the concept of “human security”, irregular migrants and asylum-seekers are two key groups I’m focusing on.

Meanwhile, I’m fascinated by the idea and role of emotions in international relations – and it’s an area that I’m devoting an increasing amount of time and energy to. The big question for me is how can societies and states feel emotionally secure together, particularly in the turmoil of populism and increasing global disorder?

As I see it, we live in an increasingly uncertain and volatile world fraught with anxiety – at individual, societal and state levels. Trust within societies and between states can build empathy and collective experiences to assuage this fear. I’m interested in how we can build trust – and ultimately peace – when the world seems so divided.

I’m currently leading an international consortium applying these ideas to status ambitions and anxieties of some states in the Global South. We’re examining why they are anxious about their position in international politics, and how we can make sense of their ambitions and anxieties in an effort to build better relations with them on the world stage.

In another project around trust, I’m working with colleagues at the University of Tromso in Norway, looking at ways to make societies resilient to disinformation. My role is to provide conceptual understandings of trust and trust-building as a tool for creating more robust societies in the age of "fake news".

Whatever I’m exploring, I’m always interested in viewing events from different points of view – other than the mainstream – often adopting feminist and postcolonial perspectives in my research.

As well as my academic research, I contribute to public debate and policy making. The UK Cabinet Office have invited me to participate in discussions around the UK’s place in the world, Turkish domestic and foreign policy as well as the thorny issue of defending democracy in Afghanistan.

I’ve also provided evidence to the UK Government on the experience of women in migrant detention centres and was the co-author of the Michigan Guidelines on Refugee Freedom of Movement – now a reference document in the UNHCR's Refworld library.

Alongside this, I do consultancy work for diplomatic representations and for London-based international investment companies regarding migration, Middle East and Turkish politics. I have also provided migration management and European security training to diplomats at the Clingendael Institute in The Hague.

I have a passion for literary classics – such as War and Peace and Les Misérables. The issues they cover intrigue me and inspired me to study International Relations and begin my academic career in this area.

My doctoral research years at Aberystwyth University strongly shaped what, and how, I want to study: what makes us – as individuals, societies and states – insecure and what should we do to live a collective life? These are still the two big research questions for me.

Rewinding a little – my research journey started at Bilkent University in Turkey, where I grew up. I graduated with my BA in International Relations in 2005. During this time, I developed an interest in security in international politics, particularly that of individuals and societies facing war, conflict and violence.

For my Masters, I took up the challenge of leaving Turkey and moving to Sweden to join the University of Lund. I studied European Politics – focusing on the ways immigrants from the Global South were constructed as security threats in the UK, France, and Germany.

Having secured funding to support my PhD, I then relocated to Aberystwyth University. In my doctoral research, I continued to work on migration aiming to develop ideas and policies that build trust between irregular migrants and communities in the UK.

Then, I spent a year or so working as a Postdoctoral Researcher on two projects – back at Bilkent University. The first was the EC-funded Converging and Conflicting Ethical Values in the Internal / External Security Continuum in Europe. The second, funded by TUBITAK, was Security Dilemma and Irregular Migration: The Case of Turkey.

In September 2011, I was thrilled to take up my Lectureship at Bilkent – and was equally happy when I was promoted to Reader in 2016. During my time as an academic in Turkey, I was able to observe first-hand the conditions under which authoritarianism can rise at the expense of democracy and human rights.

This has significantly shaped my research on politics in the Global South and the role of emotions more widely in the political sphere.

The following year, I came to Loughborough, having accepted a Lectureship in Politics and International Relations. Soon after – in recognition of my contributions to student learning – I became a Fellow of the Higher Education Academy, and was promoted to Reader in International Relations and Security in 2020.

Alongside my academic role, I served as the Prince Claus Chair in Development and Equity (2017-19). This prestigious appointment gave me the opportunity to explore migration as a social, political and economic process, and identify associated policy challenges. I was also able to form an important network of European colleagues who work in this field.

International partnerships have always been incredibly important to me – they challenge my thinking and enrich my work in so many ways. This ethos inflects my teaching too, and I’m proud to serve as the Director of Global Engagement for my School.

I’m keen that my students, particularly my PhD researchers, become active participants in their learning and see me as an equal – a fellow researcher to collaborate with, rather than someone with all the answers.

I want to encourage them to ask new questions and confidently address familiar issues in original ways so that they deliver a new perspective and produce new knowledge while developing their academic and transferrable skills.

In this way, I hope that I’m preparing them for whatever their future holds – helping them to challenge accepted truths and become independent thinkers.

As to my own future…

World politics face uncertainty and instability. New challengers are rising – states from the Global South are claiming stronger positions. Migration remains a divisive issue in the context of rising populism. My research will continue to tackle the challenges that make us globally insecure and feed into fear.

Long term, I hope to contribute to the efforts to create a world of collective security at local, national and international levels. 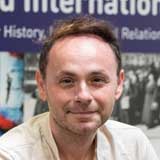 Reader in International Relations and Security

Ali has contributed several articles to The Conversation – spanning the relationship between America and Iran, the civil war in Syria, UK immigration, and the ongoing conflict in Ukraine.

Watch Ali’s podcast about how Putin’s invasion is shifting power in the Middle East and changing its relationship with the West.

Isabel Muttreja interviews Ali about the impact of populism on refugee policy in Britain, and women’s experiences of the detention system.