Ali is a Reader in International Relations and Security at Loughborough University and served as the 2017-19 Prince Claus Chair (PCC) in Development and Equity at the International Institute of Social Studies of the Erasmus University in Rotterdam.As PCC, Ali worked under the theme of 'Migration and Human Security. He is conducting research in Loughborough as a leading expert in international migration in the Secure and Resilient Societies Global Challenge

His research interests include Middle East politics and international relations, security studies, postcolonial and feminist international relations, emotions in global politics, trust-building in politics and international relations. Ali is the author of 'Rethinking Security in the Age of Migration: Trust and Emancipation in Europe' (Routledge, 2013 and 2018, 2nd edition) and 'Turkey, Power and the West' (IB Tauris, 2016). He is a co-author of The Michigan Guidelines on Refugee Freedom of Movement 2017, which has been included as a reference document in the UNHCR's Refworld.His third book Positive Security (co-authored with Prof Gunhild Hoogensen Gjorv) will be published in 2022 by Routledge.

He was a post-doctoral researcher in FP7 funded INEX Project entitled ‘Converging and Conflicting Ethical Values in the Internal/External Security Continuum in Europe funded by European Commission 7th Framework Programme) at Bilkent University, Ankara, and conducted research in the area of European relations with the Middle Eastern states. Ali was a co-investigator in the project “Exploring Civil Society Strategies for Democratic Renewal” funded by United Kingdom Economic and Social Research Council (ESRC), (February 2016-February 2018). In this project, he studied how declining trust in governance led to popular uprisings in the Middle East, in particular, Turkey. He was also associate researcher in the British Academy-funded project entitled “Alliances and Trust-building in International Politics” (September 2014-September 2016). His role was to understand why trust between states can fail in international alliances and how it can be restored.

He is currently part of two projects. Ali is a co-investigator in the project entitled “Disinformation and People: Impacts on Societal trust and Resilience”, led by the Arctic University in Tromso and funded by the Norwegian Research Council (2021-2025). His role is to provide conceptual understandings of trust and trust-building as a tool of creating resilient societies against disinformation. Additionally, he conducts research in the project run by the Diocese of Leicester entitled ‘BAME Intercultural Worshipping Communities’ (2019-2024) funded by the Church of England Strategic Development Fund. In this project, he collects data and conducts analyses on BAME representation in and inclusion to worshipping communities in Leicestershire.

Ali is actively involved with dissemination of knowledge practices. He frequently writes for the Conversation, Open Democracy, and Red Pepper on security, migration, and the state of democracy in Europe and Middle East. He conducts regular consultancy work for diplomatic representations and for international investment companies based in London regarding migration, Middle East politics, and Turkish politics. Ali also trains diplomats from and beyond Europe in the area of migration management at the Clingendael Institute, the Hague.

Ali is a scholar of Security Studies in International Relations. He does not strictly identify his research as belonging to ‘critical security studies’ exclusively, nor is his understanding of security shaped by a single theoretical approach. Instead, Ali is interested in three questions: (a) why do political actors feel security/insecurity in relation to each other? (b) how do they define and practice security? (c) how do material and immaterial power relations constitute security notions and practices? By studying the politics of security, Ali's research focuses on the ways in which multi-level actors understand, define, and practice security in relation to each other in historically produced and complex socio-economic contexts.

His research agenda’s broad ontological and epistemological perspective has given his research a unique voice and stance, dynamism, an opportunity to stretch the conceptual limits, and the ability to be fed by both ‘conventional’ and ‘critical’ approaches in security studies and IR. Ali often employs feminist and gender and postcolonial perspectives in his research. He is currently working on rethinking the concept of ‘human security’, emotional of politics of security particularly in the age of populism, conceptualising ‘particularised distrust’ in the migration–security nexus, and affective dynamics of production of ‘space’ in the EU’s external migration control policy.

The teaching philosophy he adopts is based on interactive learning and active student participation, namely cooperative teaching and ‘students as co-producers’. Ali believes that the time of lecturers as ‘sage on the stage’ or even ‘guide on the side’ has now passed; the new academia and labour market demand student–teacher collaboration in producing knowledge and improving students’ academic and transferrable skills.

The practices of lecturing, explaining and clarifying concepts, and providing real-world examples are vital components of Ali's role as a lecturer. His aim as lecturer is to encourage the construction of well-structured, cohesive, and logically sound arguments. The most useful way to achieve this objective is by utilising case studies from world politics to explain scientific concepts. Emergent learning outcomes include not simply an intellectual understanding of global issues, but also an insightful grasp of the challenging conceptual discussions of the discipline.

I didn't expect to enjoy the module as much as I did; the quality of Ali's lecturing and organisation is like no other lecturer I have come across before. The module handbook was exceptionally detailed and informative.

Ali genuinely listens to student feedback and acts on it.

Taught me a lot, very interesting, also taught me about other skills outside the module and advice.

This module offered the opportunity to actively engage with one another during the Crisis Game, using what we have been taught in lectures - which is something that has not been offered during the course so far.

Ali supervises PhD projects in the areas of security, migration, Middle East politics, and European foreign policy. If you are interested in working with him, please get in touch. 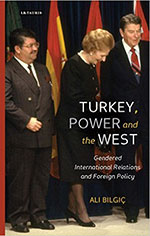 During the leadership of Recep Tayyip Erdodan and the AKP, the Turkish government shifted from a 'reactive' to an 'activist' foreign policy. As a result, many in the West increasingly began to see Turkey as a key actor in the international relations of the region, and indeed the wider international stage. 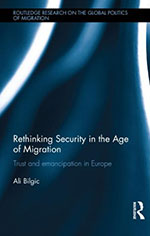 Rethinking Security in the Age of Migration

Migration and especially irregular migration are politically sensitive and highly debated issues in the developed world, particularly in Europe. This book analyses irregular protection-seeking migration in Europe, with close attention to sub-Saharan migration into the EU, from the perspective of emancipatory security theory.