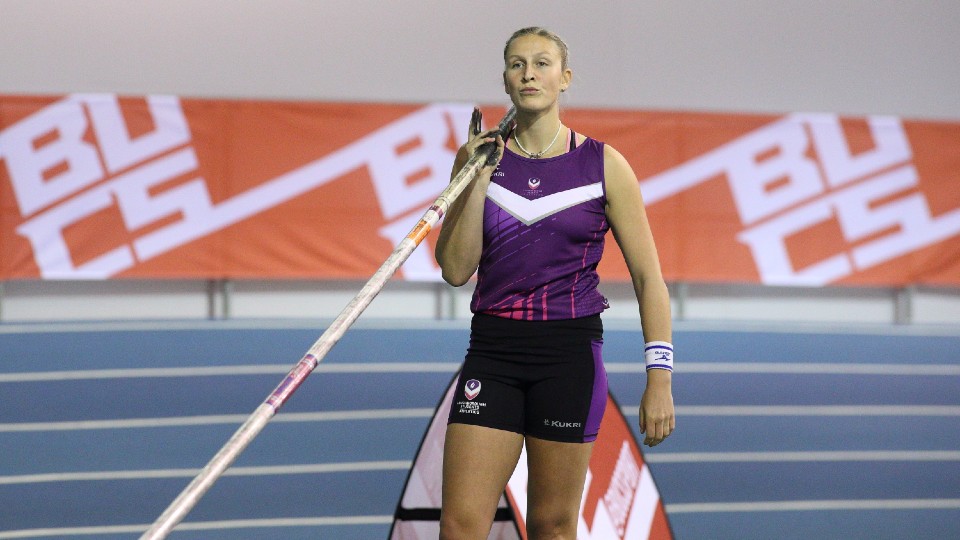 The World Champs in Oregon, USA is the first of three major track and field competitions this summer, closely followed by the Commonwealth Games in Birmingham, and then the European Championships in Munich, Germany.

Bradshaw was one of nine current Loughborough students to place on the podium in Manchester, in a Championships which saw 115 Loughborough linked (current students, alumni or Loughborough-based) athletes pick up 30 medals over the three-day competition. She was joined on the pole vault podium by training partner and fellow scholar Molly Caudery (Simpson) who pushed Bradshaw all the way, both vaulting 4.50m, and who will also be hoping for World Championships selection later this week.

Bekah Walton (Dave Turner), overcame a sickness bug and stadium headwinds to retain her UK javelin title with a throw of 51.87m, and was joined on the podium by Emily Dibble (Turner), who threw a 51.54m PB to add a UK Championships silver medal to the BUCS silver medal she won back in May. BUCS gold medallist Dan Bainbridge (Mike McNeill) collected another UK Championship medal, this time taking bronze with a throw of 71.35m.

Paralympic Champion Thomas Young (Joe McDonnell), still recovering from a bout of COVID, took a rare domestic defeat by Loughborough alumnus Zac Shaw (Leon Baptiste) in the mixed classification 100m. With favourable winds for all short sprints over the weekend, Shaw won the race in a time of 10.66 to Young’s 10.80. Current student Emmanuel Oyinbo-Coker made it a full Loughborough podium with a time of 11.03, though with a wind reading of +4.6 m/s, unfortunately, none of the times will count for record purposes.

Jessica Judd already has her place on the plane to the World Championships secured in the 10,000m, as the PhD candidate won the trials for that event earlier this month, but she is now also available for 5000m selection after a second-place finish at the UK Championships. Judd has also been selected to compete for England at the Commonwealth Games, so it’s set to be a busy summer of racing for one of Loughborough’s highest athletics BUCS points scorers of all time.

Loughborough’s jumps set up is in a great place, highlighted by a bronze medal from scholar and BUCS indoor triple jump Champion Lily Hulland (Lukasz Zawila) who jumped 12.84m. She was joined in the women’s triple jump final by first-year Georgie Forde-Wells (Zawila) who finished in 9th place. The two triple jumpers contributed to a total of 28 Loughborough-based/alumni jumpers competing over the weekend, winning 12 medals between them across the long jump, triple jump, high jump and pole vault.

Notable alumni performances included an impressive win for Jake Wightman in one of the highest standard races of the weekend, the men’s 1500m, with Wightman overhauling Olympic medallist Josh Kerr to secure his place in the World Championships team. Current scholar Matt Stonier (Chris & Sonia McGeorge), recently selected for the England Commonwealth team, finished a commendable 6th place in a truly world-class field.

Alumna and Olympian Jessie Knight, formerly coached by Loughborough Head of Sprints and Hurdles Nick Dakin, also secured her automatic World Championships selection by winning the women’s 400mH in a time of 55.08. Highlighting the strong tradition Loughborough has in this event, half the field had Loughborough links with current student Zoe Pollock (Nick Dakin) finishing in 6th place and alumni Jess Turner and Jess Tappin finishing in 4th and 5th place respectively.

Femi Akinsanya, Director of Athletics, commented, “It’s fantastic to come to a UK Championships and have such a large Loughborough presence here, not only from the competitors but also from a coaching and support staff perspective. We’ve seen podium finishes and personal bests across the three days of competition, and we’re excited to see Loughborough students contributing heavily to home nation and GB & NI teams this summer.”.