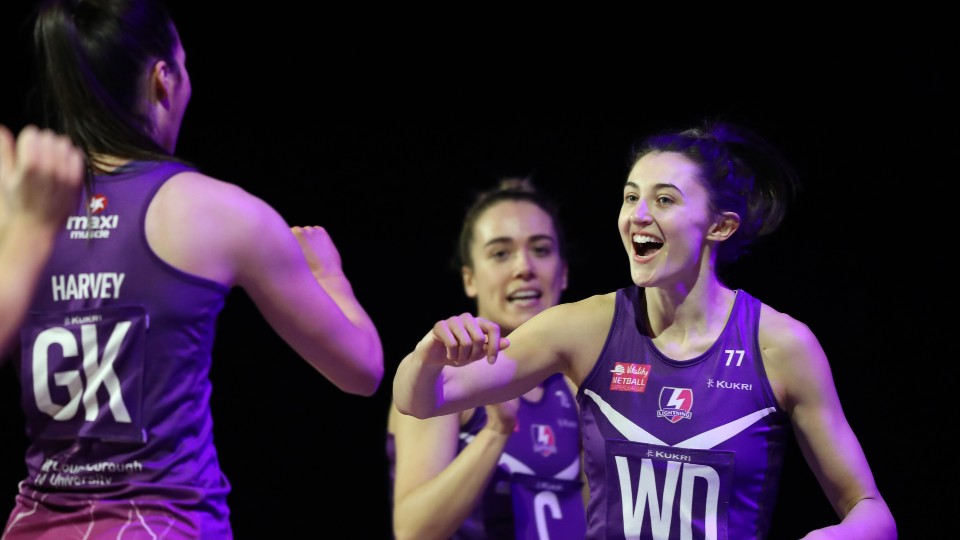 Collectively boasting over 55 caps for the Vitality Roses and all featuring in Lightning’s historic championship-winning side of 2021, the ferocious four are no stranger to success and are keen to pick up where they left off last season.

Leading from the front, last year’s captain Nat Panagarry is excited to be back:

“I am really looking forward to the season ahead, I feel incredibly proud that this is my eighth season with Lightning, and I can't wait to be back with the team. We have so much experience and unreal young athletes coming through, it’s really exciting.”

Also joining Panagarry, Lightning stalwart Hannah Joseph returns for her record tenth season and is keen to pick up where she left off:

“I am thrilled to be back with Lightning for my tenth season. This 2022/23 season squad is so exciting, there's a great mixture of experience and youth.

“It will be really exciting to keep building on the connections made last year and also getting to play with some of our new signings. It was great to make the final last year and we will be pushing to be in that final again this year.”

Despite missing out on the 2022 Grand Final where Lightning fell short to Manchester Thunder to claim runners-up, Commonwealth Gold medallist Beth Cobden is back and raring to go:

“I can’t wait for another season with Lightning, to see what we can achieve and chase the title. I feel privileged to get to play alongside such great players and friends, and be coached by some of the best, I also can’t wait to see our fans back supporting us in the 2023 season.”

Making her Superleague debut in 2020, Hannah Williams lifted the coveted trophy in 2021 in her first full season after the 2020 season was cut short due to the covid-19 pandemic. Returning for her third season, Williams is hoping to build on her side’s performance last year:

“I am so happy to the back at Lightning for another season, I feel so privileged to be back in the purple dress again, especially after last season. I can't wait to get back to work and back on the court with the girls, in front of our Lightning fans!”

Cobden, Panagarry and Joseph will first focus on their immediate task at hand, after all three names featured in the recently announced Vitality Roses squads for the upcoming Uganda International Test Series and tour to Australia.

A testament to their hard work and dedication to the sport, the full-time Roses are hoping to build on their international experience whilst competing against the best of the best – an experience that will prove invaluable when they return to their domestic side.

Head Coach Vic Burgess took over the reins from Sara Francis-Bayman ahead of the 2022 season and is delighted to have secured the commitment of Panagarry, Joseph, Cobden and Williams for her second season at the helm:

“Our midcourt gives us such strength in experience and creativity. Our centre court unit have been together for several years now and I am excited to see what they are capable of in the 2023 season.

“Hannah Williams joined Lightning from Manchester Thunder as a U21 Pathway player in 2018 and quickly progressed into the Lightning VNSL squad the following year, I am delighted that Hannah has returned to continue her journey with us.”

Keen to build a side that impressed not only in their performances on court but in the culture that they embrace off the court, Burgess reflected on her want for players such as Cobden to be in the mix:

“I am so pleased Beth Cobden is returning to Lightning, she continues to strive to be the best and brings so much energy to the squad week in week out, she has a fantastic attitude and is always open to learning and supporting her teammates.

“It is also a privilege to work with Nat Panagarry who is returning for an eighth season with Lightning and Hannah Joseph who returns for a tenth.

“Both players bring so much experience to our squad on and off the court, I’m looking forward to seeing them dominate the court again this upcoming season.”

With a further eight players yet to be revealed, be sure to keep your eyes peeled on social media over the coming days to find out who else will join Vic Burgess’ star-studded line up for 2023.