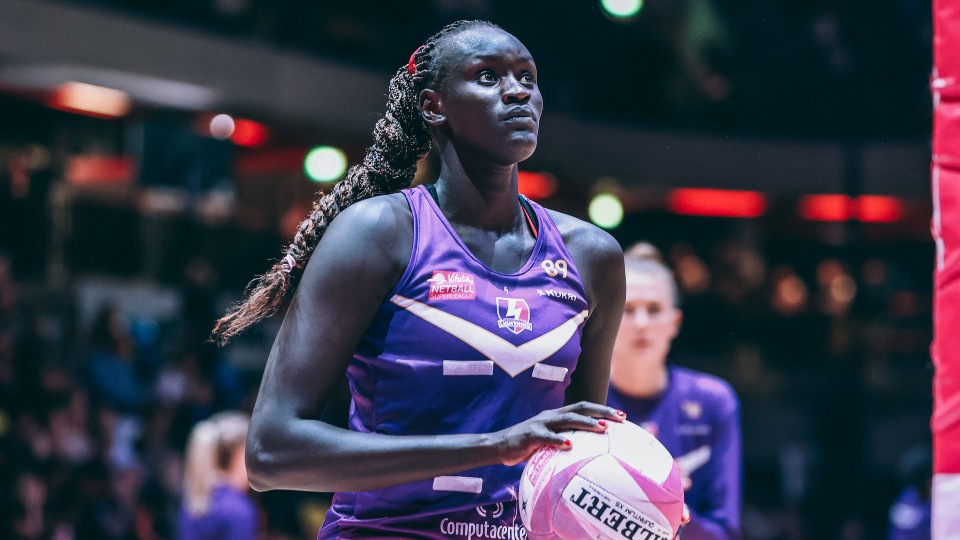 Mary Cholhok will be back at Lightning for the new campaign.

Lightning fan favourite and Ugandan International Mary Cholhok returns for her fourth season in the purple dress. Mary enjoyed a successful off-season as she competed at the Commonwealth Games in Birmingham as Uganda secured a record fifth-place finish.

Head Coach Vic Burgess is understandably thrilled to have Cholhok back and noted her continued improvement since she arrived in the UK back in 2018.

“Mary returning to us for a fourth season gives us such strength in the circle, and she has continued to improve year-on-year,” she said.

Cholhok is currently gearing up to face the Vitality Roses in next week’s international Test series where she’ll come up against Lightning teammates Hannah Joseph, Fran Williams, Alice Harvey and Nat Panagarry. Despite her current focus on international duties, Cholhok was quick to share her determination for the upcoming domestic season:

“I am so excited to continue my journey for a fourth season in the VNSL and I can’t think of a better team to be a part of than Loughborough Lightning. Last year was tough for us and I am even more determined to win back the title.”

Joining Mary in the shooting circle next season is Future Roses duo and Loughborough University students Emma Thacker and Suzie Liverseidge. Signings Burgess is delighted to have board:

“I am also excited to be working with Emma and Suzie again, they have shown such versatility and creativity and have such fantastic futures ahead of them.”

Proving a key piece in Lightning’s most successful campaign to date in 2021, Liverseidge stormed onto the scene in her debut year with her relentless athleticism shaking up Lightning’s attacking circle.

Looking at the challenge of combining the 2023 season and her final year of a Sports Technology degree, Liverseidge shared her enthusiasm at what lies ahead:

“I am really excited to be back at Lightning for a third season. I’m looking forward to building on last year and I can’t wait to be back with this team,” she said.

Having been selected to play during the 2022 Grand Final after teammate Ella Clark suffered a devastating injury, Thacker impressed the crowds with her composure and ability to draw on her previous experience in the England U17, U19 and U21 pathway.

The importance and ability to deliver in high-pressure situations saw her rewarded with a second contract for 2023. Thacker explained how she can’t wait for the season ahead:

“I’m very excited to be back with Lightning for my second season. We have such an amazing group and environment her which I’m so happy to be a part of. I believe this year is our year and I can’t wait to get started.”

The final piece in Burgess’ 2023 puzzle sees a new addition in the form of former Leeds Rhino and Future Roses star, Rhea Dixon.

Having represented England at all age group levels, Dixon made her VNSL debut back in 2017 for Surrey Storm. Moving to Leeds Rhinos in 2021, Dixon helped her side secure a semi-final spot in their inaugural season.

Dixon missed out on domestic competition in 2022 due to injury but is now back and raring to go:

“I feel very honoured to be joining a club with such a great history of players and coaches. I’m hoping to help them pick up where they left off in the last few seasons and continue making history with such an amazing group.

“One of the most exciting things is that I get to challenge myself against and learn from current and future roses every week, as well as the awesome coaching personnel we have.

“After missing most of last season due to injury, I can't wait to complete my last few stages of rehab and get stuck in with the team. All the girls are super friendly, and I’m excited to form partnerships with all of them – especially Mary in the circle.”

“Rhea Dixon is new to our squad in 2022/23. I have been keeping an eye on Rhea for a number of years as she is incredibly creative and smart in her style of play. I can’t wait to see what she is capable of at Lightning.”

Burgess was also keen to mention the injury recovery progress of Lightning stalwart Ella Clark, who suffered a ruptured ACL during the 2022 Grand Final:

“Rhea is replacing Ella Clark who unfortunately picked up an injury in the 2022 VNSL Final. Ella will be completing her rehab journey with Lightning and supporting the team 100%.”

Also familiar to the rehab journey, Dixon is aiming to support Clark through her return to court whilst learning alongside her:

“I was sad to see Ella go down injured in the 2022 VNSL final as she is an amazing player and an even better human. I am hoping she can teach me some of her skills this season and I’m looking forward to being her biggest supporter through her rehab journey.”

Lightning’s 2023 line-up is now complete and for many of their 2023 squad, international duties now loom. Williams, Joseph, Panagarry and Harvey are all gearing up to don the famous red dress next week for the Vitality Roses who are set to face teammate Mary Cholhok and the Uganda She Cranes. Tickets to see them in action are still available and can be purchased here.

The 2023 squad will be supported by three training partners whose names will be revealed in the coming days. Keep your eyes peeled on Lightning’s social media channels for news on fixtures and tickets as we edge closer to the start of what is shaping up to be the most exciting VNSL season to date.