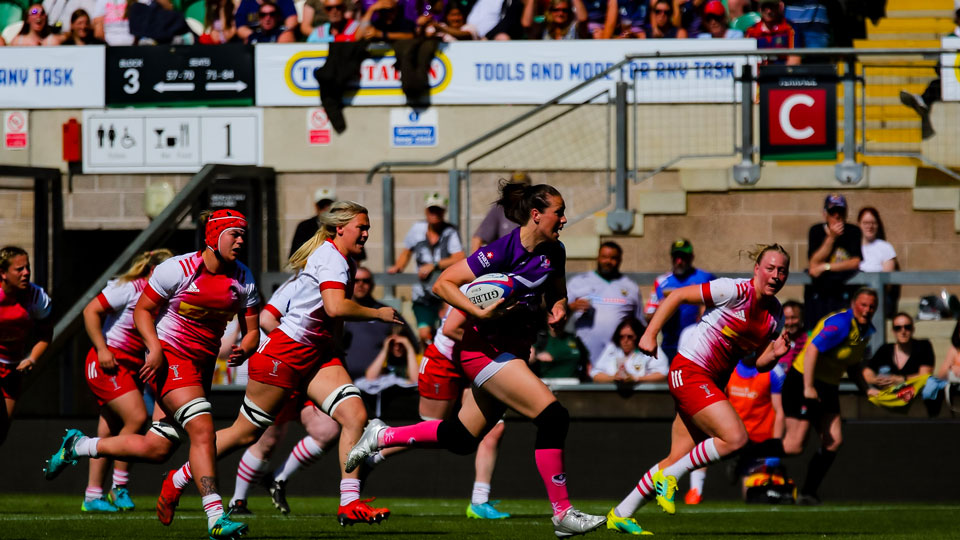 Under clear blue skies, on a baking hot day, Loughborough Lightning scorched the hallowed turf at Franklin’s Gardens as they came face to face with an all-star Harlequins team.

With temperatures soaring both teams came to play with non-stop action throughout the 80 minutes.  Right from the start Loughborough showed their determination with Helena Rowlands taking the ball from the kick off and weaving through the Quins defence.  Her break created an opportunity for the Lightning to pack to attack the Quins line.

Powerful defence by Quins repelled Lightning but a text book line out saw the Loughborough forwards picking and driving into the heart of the Quins defence.  Charli Jacoby was held just short of the line.  The Quins defence held firm and the Londoner’s started to sweep towards the half way line.  Just as they built a head of steam up though, Loughborough's Lark Davies stepped in with a thunderous tackle and came up with a turnover putting Lightning back on the attack again. This time Loughborough moved the ball out wide with some slick handling and Lightning full back, Bulou Mataitoga whizzed through the Quins defence to touch down for the first try of the game.  Helena Rowland’s conversion drifted just wide of the posts with the score 5-0.

Emily Scarrett comfortably collected the restart and her raking kick pushed Quins back into their own half.  The Londoner’s changed up a gear, launching wave after wave of attack with England Roses’ Shanaugh Brown carrying hard again and again.  Eventually Quins managed to breach the Lightning defence with No. 8 Sarah Beckett crashing over to level the scores at 5-5.  Quins missed the conversion with the teams level after 20 minutes.

Lightning showed their resolve and from the kick off they were soon on the attack.  Strong carries by the Lightning pack including Courtney Holtkamp and Lilli Ives Campion, created space out wide and Helena Rowlands set off on another dynamic, weaving run. Bursting through the Quins defence she touched down to score Loughborough’s 2nd try of the game.  Another missed conversion and the score was 10-5.

The intensity and quality of play between the two teams continued to climb with Quins working hard and Loughborough putting in tackle after tackle.  The stand out feature of the game was the Lightning scrum which was merciless and crushed Quins, driving them back time and again.  Eventually Lightning worked their way into the Quins 22 and another flawless lineout provided a perfect platform for Lightning to catch and drive.  As Lightning smashed their way forward, and it was Super Seven Sadia Kabeya who blasted over the line to touch down.  With another missed conversion, Lightning were nonetheless starting to pull ahead on the score board.

As half time approached, Quins stepped up their attack again and despite a huge effort by the Lightning, Quins were able to breach the Loughborough line taking the score to 15-10. A successful conversion meant that at half time the score was 15-12 with Lightning just ahead. 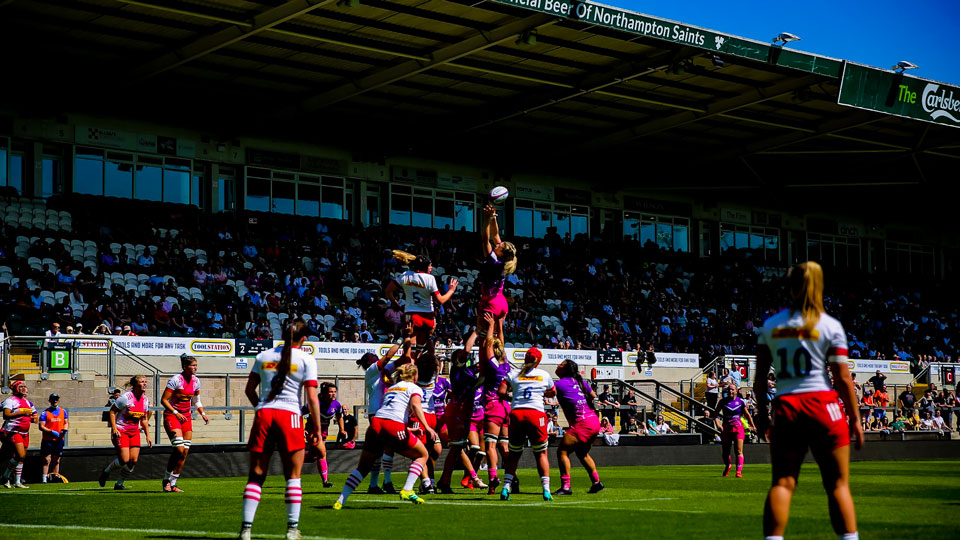 As the second half got underway Quins started at a high tempo but once again Loughborough’s scrum was too powerful and the Loughborough defence held out against wave after wave of Quins attacks.  Eventually though, Quins were able to profit from their hard work.  A slick lineout five yards out from the Loughborough line, created a perfect 'catch and drive' scenario and the Quins backs piled into the maul taking the ball over the line and Quins into the lead for the first time in the game.  15-17 with around 20 minutes left in the game.

Both sides were tiring and looking to bring on fresh legs given the exhausting heat and the pace at which both teams were playing.  With the clock seeming to tick faster as the end of the game started to come into sight, the Franklin’s Garden’s crowd started roaring on the Lightning players. And their impact on the Loughborough players was plain to see as across the team every player's work rate went up. This was 'all or nothing' time for Loughborough who were determined to finish their season on a high.

The combination of replacements and renewed determination was to pay dividends.  With 10 minutes left Loughborough moved the ball wide and replacement Hallie Taufoou sped down the touchline to score yet another try. Loughborough were back in the lead and with a successful conversion the score was now 22 – 17.

Watched by a record crowd for a stand-alone Lightning match, of nearly 1500 spectators, despite all their hard work and talent, Quins were unable to find a way forward in the final minutes of the game and Lightning held on to secure a superb victory.