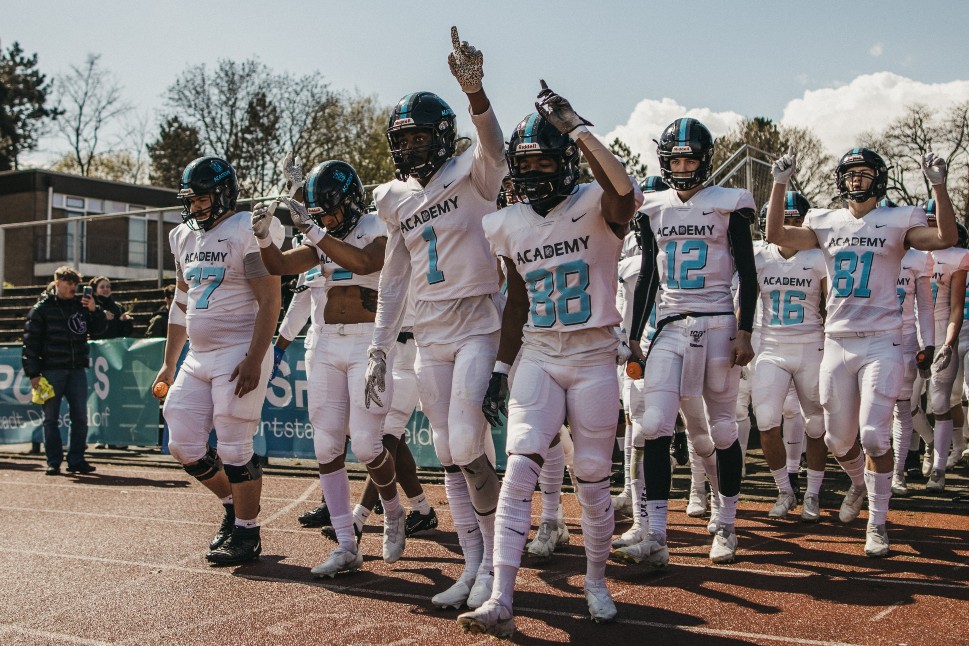 The National Football League’s UK-based NFL Academy will relocate to Loughborough College and Loughborough University for the start of the 2022-23 academic year, it was announced today.

Set up in 2019 and currently based at Barnet and Southgate College in London, the NFL Academy provides students aged 16-19 with pathways into employment, further education and the opportunity to play NCAA college football in the United States by combining full-time education with professional-level American football coaching.

From September 2022, all football and academic operations will move to Loughborough, where a partnership between the College and the University will provide an opportunity for young players to become part of a world-renowned centre of sporting excellence.

Throughout the partnership, the College will provide high-quality coaching, education, accommodation and pastoral support to its cohort of players, while the University will provide performance staff and world-class facilities to focus on the physical development of students.

“Barnet and Southgate College has been an excellent partner in getting the Academy established, and we are now very excited about the opportunity to further develop both the academic and athletic offering in a move to Loughborough,” said Brett Gosper, NFL Head of Europe and UK.

”Operating at an elite athletic performance centre with a global reputation, combined with the excellent classroom offering, gives the students the greatest chance of future achievement in all fields. It will allow us to achieve our aim of creating life-changing opportunities for young people through the sport of American football.”

Professor Nick Jennings, Vice-Chancellor and President of Loughborough University, said: “We are delighted to work alongside the NFL on this ground-breaking partnership.

“By working collectively with colleagues from Loughborough College, we will provide young players with a first-class education and world-renowned training environment across both campuses. By providing this solid foundation in their early sporting careers, we will play a key role in the growth of American football in the UK and around the world.”

Chancellor of Loughborough University, Lord Sebastian Coe, a double Olympic track and field gold medallist, said: “We are very pleased to have the opportunity to partner Loughborough, the premier sporting university in the UK, with the NFL, the world’s most valuable sport’s league. We look forward to playing a key role in the development of American football and are excited about the opportunity this gives Loughborough to expand our brand and our reputation in the US and globally.”

Jo Maher, Principal and CEO at Loughborough College, said: "Loughborough College is incredibly proud and excited to partner with the NFL and Loughborough University on the NFL’s only global Academy. With a track record of nurturing and developing elite athletes through high-quality pastoral support and teaching, we cannot wait to welcome our first cohort of students on the NFL pathway.

“This is a golden opportunity for everyone involved to forge a truly impactful and successful academy which creates potential NFL stars of the future and it’s one we’re delighted to be part of.”

Both Loughborough College and Loughborough University have a proven track record of developing hundreds of elite-level athletes including Olympic and Paralympic champions.

Loughborough was recently named the best university in the world for sports-related subjects for the sixth year running on the global QS higher education league table. It has won that accolade every year since its inception in 2017.

Since its launch, the NFL Academy, which attracts students from all over the UK and Europe, has proved to be a breeding ground of high-level football talent, with five students receiving scholarship offers from NCAA Division 1 colleges in the US.

“This is a hugely important initiative for the growth of football and for the many young athletes who get the opportunity to showcase their talents,” said Osi Umenyiora, two-time Super Bowl winner with the New York Giants and now an NFL ambassador and broadcaster in the UK. “Developing international athletes and ensuring they have pathways into elite football is becoming a cornerstone of the NFL’s global strategy and the partnership with Loughborough will drive that initiative forward.”

On the field, the Academy team is scheduled to close out the season with its third European game on May 7 and is planning to embark on competition against US-based teams in the future.

Gosper continued: “The success on the field and in the classroom has been a testament to everyone involved: the coaches, the staff at Barnet and Southgate College and, of course, the student athletes themselves. To have achieved so much despite almost two years of virtual learning and reduced practice because of the pandemic demonstrated the potential of the programme and gives us great hope for the future development of the NFL Academy.”

Recruitment for the class of 2022-23 is now underway. Student athletes wishing to apply for a place can register interest at: https://nfl-academy.loucoll.ac.uk/