Lightning Netball edged out by league leaders in round 20 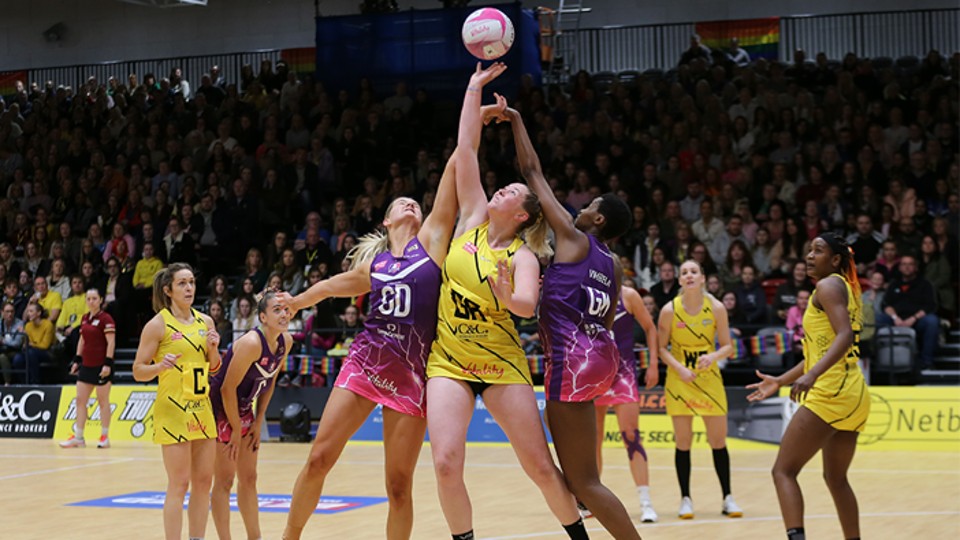 Loughborough Lightning Netball succumbed to a disappointing 63-71 defeat over Manchester Thunder in a top of the table clash on Monday night.

For the final round of the 2022 Vitality Netball Superleague (VNSL) season, Lightning travelled to the northwest to face the league leaders and the only unbeaten side in the league. A rich history of causing upset to each other’s cup runs, both sides had much to gain in the closing match of the round with Thunder looking to maintain their clean record and Lightning looking to cause upset and steal a final victory over their opponents. Famous for their loud and proud crowds, Lightning joined Thunder in celebrating PRIDE Month with a rainbow-themed extravaganza match.

The opening quarter left no time for lying down, as both sides converted each and every centre pass to maintain a level score line for most of the period. Whilst Thunder’s Nat Metcalf treated her home crowd to pinpoint feeds, Lighting quickly retaliated with their famous confident duo in Clark and Cholhok finding the net time and time again. With just two minutes left on the clock, Vitality Roses defender Fran Williams stole an interception to allow Lightning the opportunity to push ahead by two. Thunder soon saw an end to it however and finished the quarter ahead by just one.

With both sides eager to push on in the second quarter, Joseph and Panagarry worked tirelessly to deliver the ball through court to Clark and the recently returned Cholhok who missed the central rounds of the 2022 season due to injury. Equally formidable at the opposite end of the court, South African and Lightning defender Zan Vimbela was hard matched against fellow African Nations Cup contender in Malawi’s Joyce Mvula who seamlessly plucked long range ball from the air only to slot it through the net. In the final minutes of the opening half, replacements saw young gun Emma Thacker step onto court in place of Ella Clark in a bid to inject a new approach to Lightning’s shooting circle.

Making changes for the second half, Head Coach Vic Burgess moved captain Nat Panagarry to the wing defence position in light of Beth Cobden’s absence, due to injury, with Hannah Williams stepping into the centre spot. Also getting the nod, Alice Harvey stepped on court at goalkeeper in place of Zan Vimbela. Quickly finding their groove and with interceptions from Williams, Lightning soon pulled the score to within one. Not keen to allow the visitors any room to move, Thunder soon retaliated once again and with the reinjection of Mvula at goal shooter, Thunder pushed ahead once more.

The final quarter saw Head Coach Vic Burgess rotate the bench once again. Eager to rest her side ahead of Friday’s semi-final against London Pulse, the changes saw Ella Clark return to court, this time at goal shooter and Suzie Liverseidge step into the wing attack spot, giving Hannah Joseph a hard-earned break. Also returning to court for the final fifteen, Ella Bowen joined Alice Harvey in the defensive circle to keep Thunder on their toes and add a new level to Lightning’s campaign.Giving them no time to adjust to their new combinations the home side drilled down further, summoning their final ounces of energy to push on and increase their lead in the final moments of the match, claiming the victory and maintaining their unbeaten record at the sound of the final buzzer.

“It was a very competitive game, there was some momentum that we could’ve used better to push us forward. But there’s definitely positives we can take from the match, we got some really good combinations out there and there’s lots we can learn heading into the semi-finals.

“For us, it was an opportunity to rest some players, get some youngsters out there and really test out what works and what doesn’t. I’m happy we got through the game and ultimately there’s lots to take home and learn from. On Friday it’s now about taking that information and using it to get across the line.”

Lightning are back in action in just 4 days’ time as they welcome fellow top-four side London Pulse to Loughborough University for their semi-final clash. With Thunder hosting Team Bath for the first semi-final at 6:30pm, Lightning will take to court LIVE on Sky Sports at 8pm. Witness all the action live by securing your seat to Lightning’s final home match of the season. Tickets are selling fast so don’t miss out!

Be sure to tune into @lborolightning on Twitter to keep up to date on all the live action.