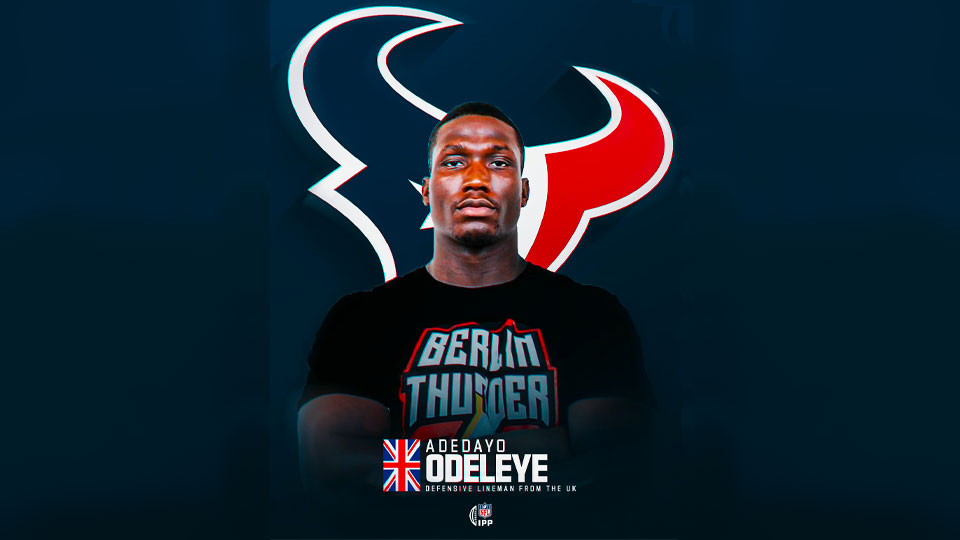 Loughborough student Adedayo Odeleye has earned a dream move to the Houston Texans in the NFL as part of the 2022 International Player Pathway program.

The program, which enters its sixth year in 2022, is part of the NFL’s efforts to strengthen the pipeline of international players and aims to provide elite international athletes the opportunity to compete at the NFL level, improve their skills, and ultimately earn a spot on an NFL roster.

Adedayo, who was born in Nigeria before moving to the UK at the age of nine, first started playing football in 2017 at Loughborough University. Showing a natural talent for the game, he played defensive line for three years and was also named team captain in his second year.

After missing out on a move to the NFL in 2021, Odeleye took his talents to the Berlin Thunder in the European League of Football, making the ELF All-Star team.

"The IPP program is instrumental in the discovery and development of international players, and we are excited the quality of players continues to increase each year," said Damani Leech, NFL Chief Operating Officer of International.

"We've seen great momentum in the program with Roy (Mbaeteka – New York Giants) and Haggai (Chisom Ndubuisi – Arizona Cardinals) having already signed with teams this year. They, along with the players allocated to teams through the program, will now have the chance to further develop their skills in an NFL environment. Teams are looking forward to welcoming the players to their camps this summer."

In a major coup for the East Midlands region, it was recently agreed that The National Football League’s UK-based NFL Academy will relocate to Loughborough College and Loughborough University for the start of the 2022-23 academic year.

To read more on this story, visit here: https://www.lboro.ac.uk/media-centre/press-releases/2022/may/nfl-academy-to-move-operations-to-loughborough/