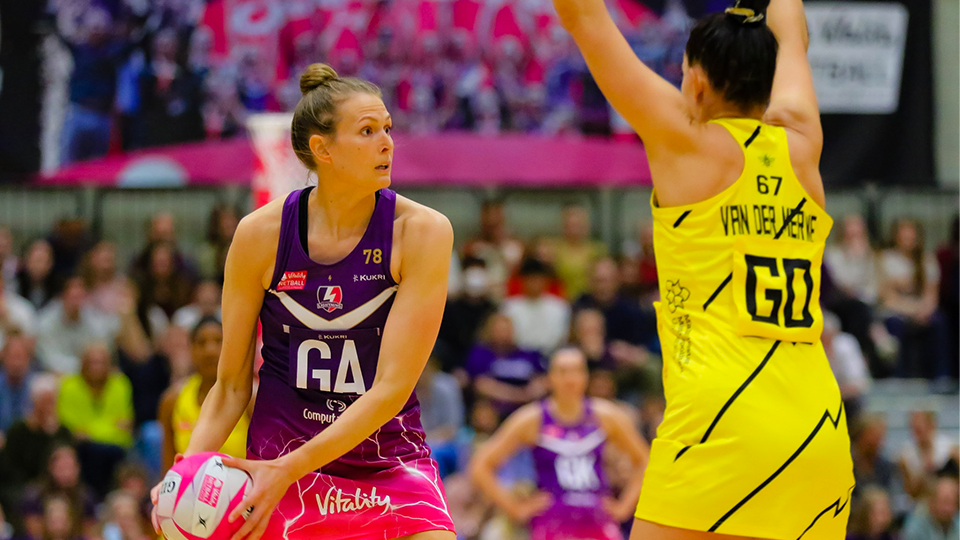 Loughborough Lightning’s unbeaten run came to a halt on Monday night after visitors and league leaders Manchester Thunder recorded a 61-66 victory over the home side.

Intensity reached new heights in Sir David Wallace Arena on Monday night as the current top teams in the league went head-to-head, both eager to claim the top spot heading into the second half of the season. Both teams headed into the round unbeaten, with Thunder marginally ahead due to Loughborough being a game in hand. With the fullest arena in Lightning history here to support the girls, there was no room for error and the pressure was on.

Lightning’s regular starting seven took to the court in the opening quarter, confidence in their stride as they prepared to defend the first centre pass. The standard of netball in the arena was unparalleled, with 12 out of the 14 on court being senior international players. Thunder claimed the first goal of the quarter with England Rose Nat Metcalf who recently returned from competing in Australia’s Suncorp Super Netball, to support her team this season. But as usual, cool, and confident Mary Cholhok soon retaliated and secured Lightning’s first goal. Furthermore, Ella Clark’s wide drives out of the circle succeeded in breaking down Thunder’s defence, assisting Mary Cholhok as part of what can only be labelled, the ‘dynamic duo’. Looking to the other end of the court, Alice Harvey, Fran Williams and Beth Cobden were working seamlessly together, constantly communicating in order to intimidate and dominate their defensive third. With Thunder leading 19-13, Lightning needed to return fighting to close the gap.

Lightning didn’t allow the scoreboard to dim their spark, returning to the court with a fighting intensity. Cholhok, Clark, Williams and Panagarry worked cohesively as a team to work the ball around the back of Thunder into the ideal position under the post. Skipper Nat Panagarry’s constant communication and celebration of the girls boosted team spirit whilst the crowd were loving Ella Clark’s impressive turnovers mid court, bringing the ball comfortably into Mary Cholhok’s possession. Alice Harvey continued to battle and force the GS into her intercepting reach, earning Lightning a crucial turnover. The side’s strong perseverance and redemption throughout the quarter, narrowing the score at halftime to 33-29 to Thunder.

Returning to the court, and with help of Hannah Joseph’s exceptional feeds and Alice Harvey’s strong interceptions, Lightning were able to claim the first three goals of the quarter. The side’s efforts continued to get stronger, with Harvey forcing another interception, making the score level at 33-33. Cholhok’s composure saw Lightning momentarily edge in front, with both teams chasing the score. Fran William’s clean interception demonstrated technical perfection, giving Lightning the crucial opportunity to take the lead. This was followed by Beth Cobden and Alice Harvey’s back-to-back interceptions, which had the audience on the edge of their seats, encouraging of the vigour and relentlessness of the Lightning side. Thunder’s replayed ball enabled the girls to take advantage of a free pass. However, Thunder matched the intensity, winning it back in Lightning’s attacking third. At the end of the third quarter, the scoreboard read 50-45 to Thunder, leaving all to play for in the final quarter.

The quarter began with a Lightning centre pass, with Suzie Liverseidge stepping on court as GA and Zanele Vimbela as GK. A fake pop from Hannah Joseph into Mary Cholhok deceived the GK, enabling Cholhok to take the shot uncontested. Yet another extraordinary interception from Beth Codben turned the ball back into Lightning possession. Moreover, a battle from both Vimbela and Williams against Thunder’s Cardwell provided an astounding rebound which pumped adrenaline through the stadium. The fresh legs of Suzie Liverseidge worked through the space on the circle edge and provided new energy to the court. Despite a fight to the finish, Lightning suffered a narrow defeat, with the final score reading 66-61 to Thunder.

“Tonight was a real test for us, Thunder were a strong side and we will go back and reflect on how we can achieve a strong start moving forward.”

“Credit to the girls for their intent tonight, they’re always looking to get better and better and to learn from each game. At no point tonight did they sit back and let the game get ahead by too much and I’m really proud of that reaction.”

“We love playing at home, it was great to have a sell out tonight and to have so many people getting behind us! Hopefully we’ll see that again next Monday!” said Joseph.

Loughborough Lightning will return to court in just six days’ time, taking on London Pulse on Saturday at The Copper Box Arena, London. Catch your favourite Lightning stars in action back at home on Monday 4th April at 7pm when they welcome Leeds Rhinos to Sir David Wallace Arena for the first time ever. Tickets are on sale now and selling fast!