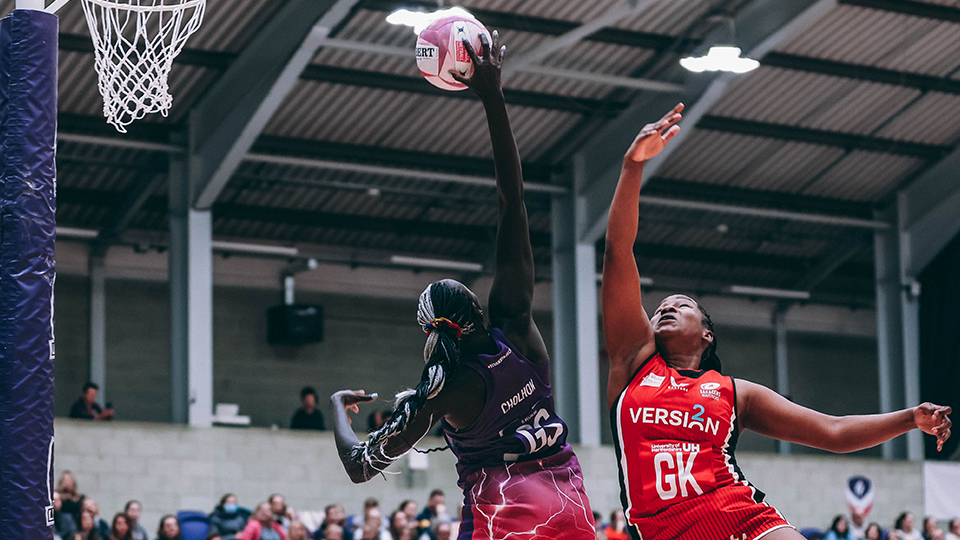 Loughborough Lightning made it five wins from five in the 2022 Vitality Netball Superleague (VNSL) on Saturday night with a dominant 71 – 47 victory over Saracens Mavericks in front over over 1000 home fans.

Lightning headed into round six against their closest rivals yet. With both teams currently tied on 12 points, it was all to play for versus Saracens Mavericks.

Both sides boasted 12 points heading into the round however with a game in hand and an undefeated record, Lightning were favourites on the books for the night’s clash. With Lightning’s previous encounter seeing success versus Mavericks back in the 2021 season, the confidence of the reigning champions was high heading into battle.

The game intensity was high from the start, with a centre pass play and a turnover seeing Mary Cholhok steal her first two points of the game. An extraordinary shot was then taken by Ella Clark from the edge of the circle to further consolidate Lightning’s lead. This ferocity to win was mirrored throughout the court, with Alice Harvey and Fran Williams’ defensive pressure forcing Maverick’s composure to crumble, delivering turnovers to widen Lightning’s lead. The promising 19-7 score at the end of the first quarter suggested that there was only more quality to come in the next quarter.

The same seven took to the court in order for the home side to further storm into the lead. With constant communication and reassurance from skipper Nat Panagarry, the girls were liquid moving up the court. Despite an exceptional shot from Mavericks’ goal shooter, Alice Harvey and Fran Williams’ communication and constant switching meant that they were able to reassert their dominance in the circle. Up in the attacking third, a well thought out fake and feed by Hannah Joseph sent the ball directly into Mary Cholhok who waited in prime position under the post. Going into half-time with an astounding 36-21 score, Lightning were sure to be in for a positive half-time team talk!

Lightning were the first to the ball, starting with the centre pass in the third quarter, shortly followed by a shot from Ella Clark. Every goal of the first five minutes of the quarter belonged to Lightning, and the crowd couldn’t seem to get enough. The atmosphere in the arena was electric, confirming the dominance of the 2021 VNSL champions. The sides intensity failed to falter even for a second, always keeping an eye on the ball, allowing Mary Cholhok to celebrate yet another goal. After a powerful performance from Alice Harvey, the final minute of the quarter bought Zan Vimbela onto the court as GK. The promise of the South African International reignited excitement amongst the crowd in eager anticipation of her circle dominance. The victory was soon in sight as Lightning headed into the final quarter ahead by 23.

Heading into the final 15 minutes, Lightning made another substitution, seeing Suzie Liverseidge fulfilling the footsteps of Ella Clark, Ella Bowen on as WD and Hannah Williams on as WA. Liverseidge’s chemistry with Mary Cholhok was palpable, seeing a fake pop over to Cholhok, deceiving both the GD and GK. The girls continued to put on a show, understanding the importance of goal difference to take to the top of the league table. The fresh legs on court were phenomenal in exhausting Mavericks, providing the quality we have all come to associate with Lightning. Despite Zan Vimbela having to work hard to apply pressure on the Mavericks GS, there was never any sign of defeat.

The remaining five minutes continued to provide nothing but excitement, speed, and thrill for the audience. The final substitution saw Loughborough University’s own Emma Thacker on at GS. Almost immediately after stepping foot on the court, Thacker saw a goal to her name. The versatility of this season’s team reaps success, of which fans have so much more to look forward to. The final scoreboard screamed victory for Lightning, reading 71-47, and the Computacenter player of the match award deservedly going to Mary Cholhok.

In front of over 1000 Lightning fans, Cholhok thanked them for their support;

“It means a lot to us as players to have so many of our fans in the crowd, it really keeps us going and gets us over the line. It’s been a good start for us but the season is long, we still have a lot to work on as a team but hopefully everyone appreciates how much we’re putting in as a team and tonight it’s about celebrating the little wins.”

Taking over the reins from Sara Francis-Bayman at the start of the season, Head Coach Vic Burgess has seen her side go from strength to strength over the initial weeks and is now 5 and 0 in the 2022 league.

Of the night’s victory, Burgess commented;

“For us it’s about executing and being consistent across all four quarters and we’ve really focused on pushing on when we’re ahead. I think they did a really good job of that today.

“Every shooter that takes to court for our team has shown that they’re capable of consistency and it was really good to get a good mix of those girls out there tonight.”

Raising money for local cause Leicester LGBT Centre, the PRIDE themed charity match will feature lots of activities and games for fans to get involved in to raise vital money for the cause.

Tickets are selling fast so secure yours now at www.loughboroughlightning.com