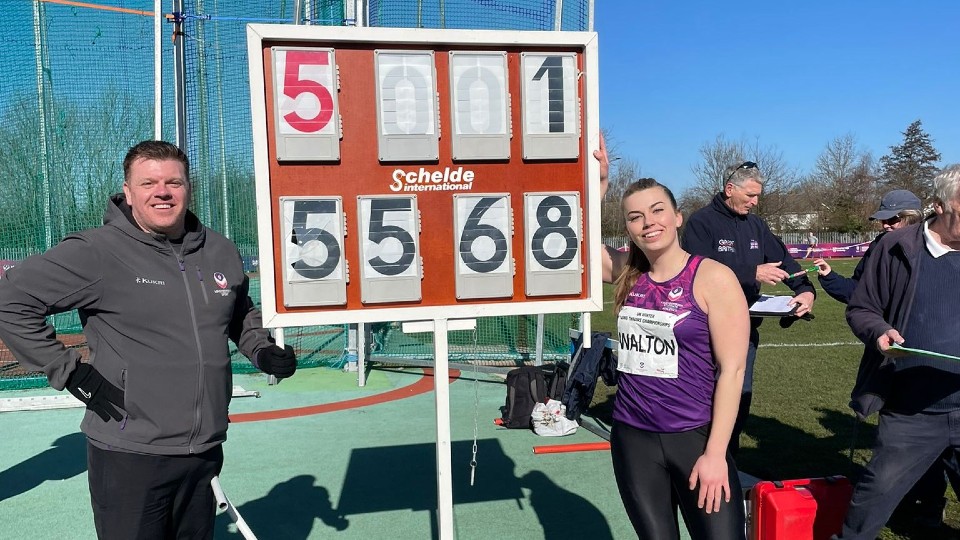 A sunny February day was certainly appreciated by the athletes, leading to some excellent performances from the Loughborough Students competing.

In the first event of the day, Loughborough Scholar Daniel Bainbridge took silver with 72.95m, less than a metre off his best ever throw and just behind Joe Harris’s winning throw of 75.17m.

Elsewhere, Bekah Walton took the ladies title with a personal best of 55.68m, the longest throw by a British lady in 5 years.

Loughborough’s Ioanna Malli took silver with 53.95m and Emily Dibble added over 3 metres to her personal best with 51.03m for 4th place.  Paralympic and World Champion Hollie Arnold opened her season with 40.26m.

In the Hammer throw, Welsh thrower Osian Jones took the Gold with 70.74m and Katie Head the women’s title with 69.72m, just ahead of Loughborough-based Jess Mayho in Silver. There was also a great personal best for British Athletics Futures athlete Charlotte Payne with 66.74m.

In the women’s event, Loughborough-based Kirsty Law took the win with 54.69m whilst Loughborough scholar Taia Tunstall added almost a metre to her lifetime best with 51.93m.

Loughborough would like to thank the ever-willing officials who made the day’s event run so smoothly.