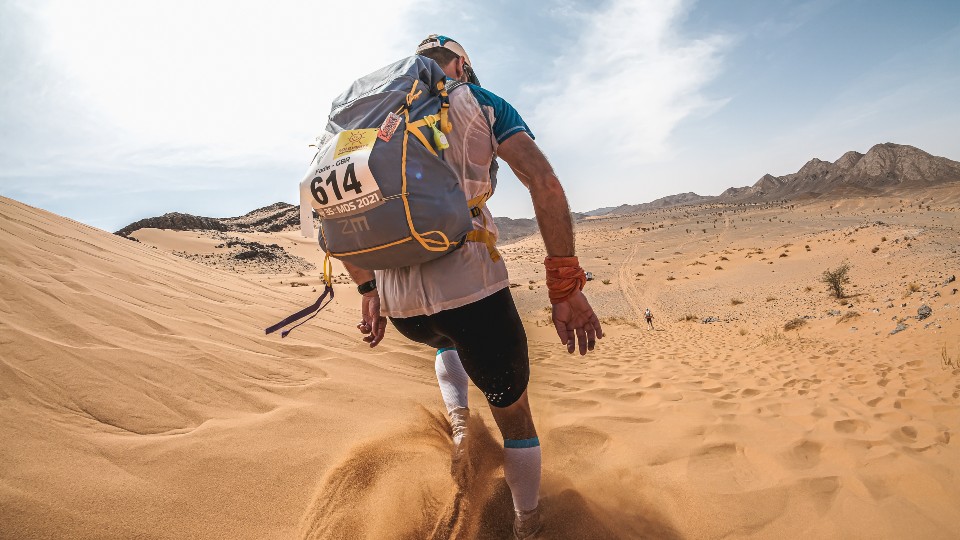 Loughborough University alumnus, Fadie Shamoon, has raised over £9,000 for charity after completing the gruelling Marathon des Sables in Morocco.

Fadie, a graduate in Mechanical Engineering (2005), completed the six-day 250km race across the Sahara Desert in just over 31 hours of running, raising a small fortune for East Anglian Air Ambulance in the process.

Initially set to compete in 2020, Fadie’s adventure was delayed due to the pandemic, but he was finally able to put on his running shoes for the 2021 October start – over two years later than originally planned.

Recognised as one of the world’s toughest sporting challenges – both mentally and physically – Fadie called upon his Loughborough roots for physiological advice ahead of the race from colleagues in Loughborough Sports Performance Support Team.

“I contacted Loughborough back in 2019 and knowing that 2021 was going ahead I was all set,” he explained.

“I had four sessions in the heat chamber with the team that gradually built-up temperature wise to about 37 degrees Celsius with the backpack at race weight of 9kg.  We also measured sweat rates in the sessions, and it showed that I was a very “sweaty” runner, losing net two litres of fluid in one hour of running.

“Rhona (Pearce) also introduced me to sodium loading which I think saved me in the first couple of days when temperatures hit 55 degrees on Day 1 and got even hotter in the dunes on Day 2.

“It was a simple recipe but certainly helped me not feel the effects of dehydration. The team, Rhona, Steven (Harris), and Karolina (Garbowska), were immense from the start.”

It was these key steps that helped Fadie stay focused when conditions, and the feat of competing, could have easily overpowered him as it did to 48 per cent of competitors who didn’t complete the race. In comparison, ‘normal’ dropout rates are usually under 10 per cent for the event. 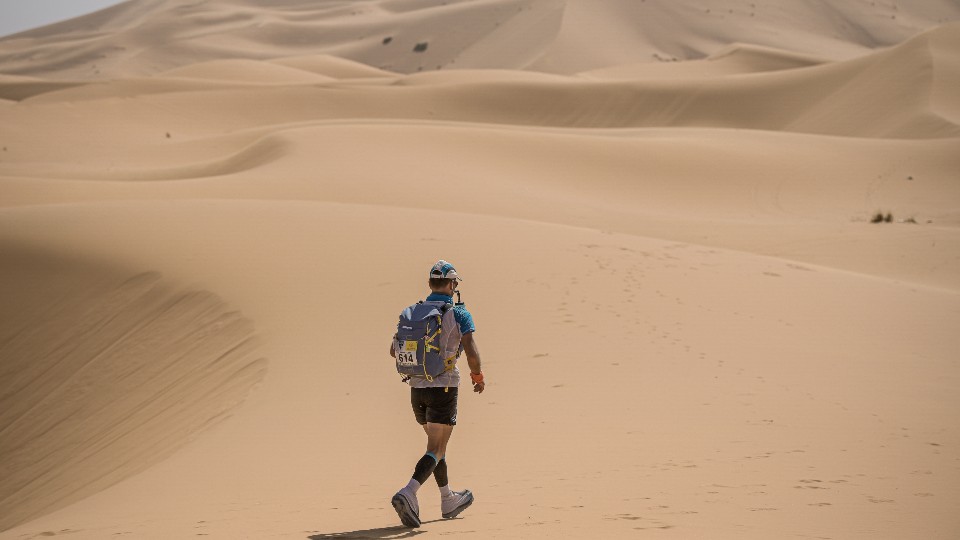 “There were a few instances where I experienced overwhelming feelings, especially when I would finish a stage and be on my own for a period of time,” Fadie added.

“It was important for me to put that days’ race behind me and not dwell too much on any mistakes I had made. I would move on to thinking about my tent mates making it back in one piece and ensuring I took on fluid and fuel to recover and get ready for the following day’s stage.

“I witnessed a full spectrum of emotions, from sadness across the bivouac when a competitor died on stage two, to happiness when completing the long day (double marathon) on stage four, which for me was the make-or-break day.

“This was followed by joy and pride when receiving my finishers’ medal, to an ‘emptiness’ and ‘what next’. We seem to be wired to not be satisfied with reaching goals and accomplishments and always wanting to do more!”

Despite experiencing a whole array of difficult emotions, Fadie also took solace in the natural beauty of his surroundings.

“One thing that struck me, which we don’t get to experience at home, was seeing the stars and Milky Way at night – it was special to see and a good reminder that we should try and disconnect from the everyday life and distractions.

“I have entered the 2022 edition too as I enjoyed the race so much, I just liked the basics of camp life. To a certain extent, it was a leveller in that all egos were left at Gatwick.”

After taking some time to reflect on his achievements, Fadie is now focused on the next event and will be once again supported by Loughborough colleagues.

Donations for Fadie’s challenge are still open and those wishing to do so can give HERE and for more information on the Loughborough Sports Performance Support Team, click HERE.