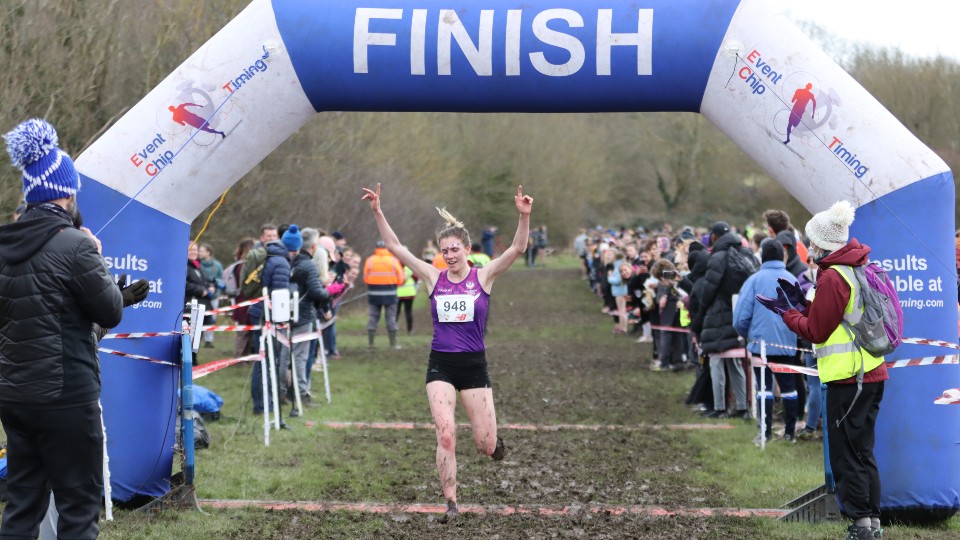 It has been two years since the last BUCS Cross Country Championships in Edinburgh in 2020, but after coming away with individual and team wins at this year’s edition in Horsenden Hill, Middlesex on the 5th February, Loughborough proved it had been well worth the wait.

The highlight of the day was undoubtedly a Loughborough 1-2 in the women’s long course race with Kirsty Walker leading her teammate Abbie Donnelly over the line of the 8km course. With fellow Loughborough student Alex Millard taking 4th place, and Grace Carson backing up the scoring athletes with a strong 12th place it was inevitable that the women would also win the women’s team competition.

It has been 18 years since Loughborough has had an individual winner in the women’s competition, with Loughborough alumna, Olympian and world silver medallist Lisa Dobriskey last taking that honour in 2004.

Not to be outdone, the men’s A team backed up their female teammate’s performances with a hard fought silver team medal, with Matt Stonier taking an excellent individual bronze behind established senior International Will Battershill from Birmingham and GB&NI U23 teammate Zakariya Mahamed from Solent. Stonier’s performances were supported by his fellow A team teammates Ned Potter in 9th, Angus McMillan in 13th, George Beardmore in 22nd, Finnian Hutchinson in 44th and Ben Wills in 60th.

The men’s and women’s short course races gave an opportunity for more precious metal to be won, with the women taking the short course team silver courtesy of Alex Barbour and Harriet Bloor’s 2nd and 3rd places respectively, and Abbey Hancock finishing a fine 12th. Loughborough had a further 17 women finish in the top 100, highlighting the strength and depth in Loughborough’s women’s endurance.

800m specialist Ben Pattison was the top finisher in the men’s short course (8km) race in 5th, backed up by Ben Lewis in 10th, Tokyo Paralympian Luke Nuttall in 18th and Jack White in 20th.

Loughborough came away with 62 BUCS points on the day, more than any other university, to strengthen the club’s position as the most successful student athletics club in the country.

Since the last BUCS Cross Country the endurance world has lost Loughborough legend George Gandy, and pre-race speeches were full of calls to ‘do it for George’.

The teams certainly would have made George proud, and Kyle Bennett, George’s successor as Head of Endurance at Loughborough was delighted with the performances in Middlesex. He said: “What a day! I am so proud of everyone that raced and supported the team at BUCS Cross Country. The atmosphere was amazing from start to finish and the level of support Loughborough students provided to each other as teammates was fantastic to witness and what BUCS cross is all about. I want to thank all the coaches for their commitment to the athletes and the programme, and to the committee for all the organising that was done in the background. Days like this wouldn't be possible without a momentous effort from all involved”.

Full results from the day can be found on the BUCS website. BUCS Athletics: Cross Country Championships 2021-22