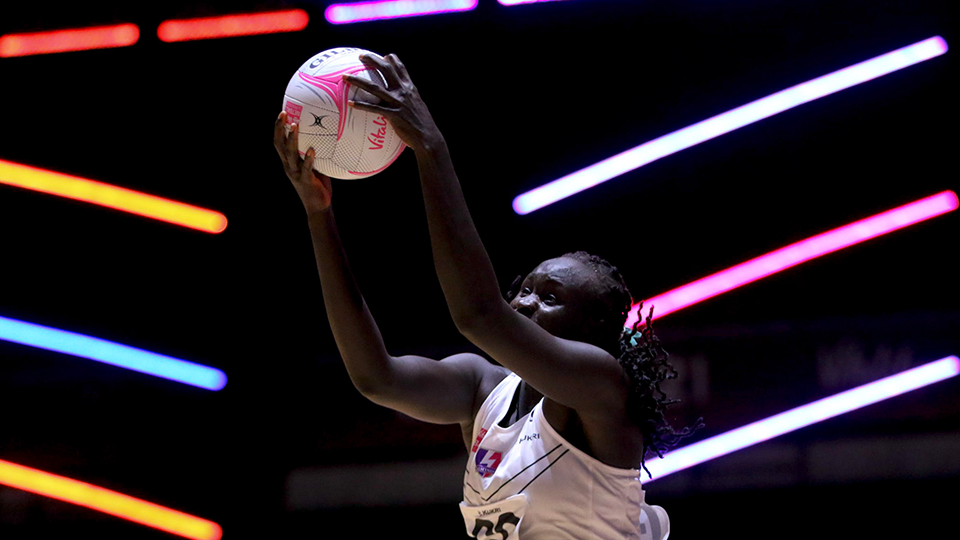 Loughborough Lightning returned home for the first time since 2020 on Saturday night, securing a resounding 65 - 37 victory over visitors Celtic Dragons in round three of the Vitality Netball Superleague (VNSL).

With the comfort of their home court and the Lightning family’s cheers ringing loud in their ears, the 2021 VNSL Champions settled quickly into the match, leaving little time for the visitors to claim any dominance over the game. With the starting line-up featuring six senior internationals and an England U21, Lightning’s depth, experience and confidence played easily into their hands and they finished the opening quarter ahead by 12.

Showing no signs of slowing down, Lightning shook off Dragons increasing physicality, remained calm and continued to add points to the board. The mid court trio of Panagarry, Cobden and Joseph sent the ball sailing through court at ‘’lightning speed into the waiting hands of last year’s golden shot winner Mary Cholhok whose famous lay-up style shot put the ball cleanly through the net time and time again. Meanwhile, at the far end, Harvey and Williams continued to shut down the incoming ball from Dragons despite their best intentions to convert.

Heading into the second half with a whopping lead of 21, Lightning used the opportunity to change up their bench, bringing new recruit and Loughborough University student Emma Thacker into the mix with Ella Clark moving to goal shooter and Hannah Williams taking on the centre spot. Despite the changes made, the side continued to dominate through court and with the addition of new signing and South African international Zan Vimbela in the defensive unit, the side went from strength to strength.

Just 15 minutes remained, and Lightning reeled off yet more changes, giving rotating mid courter Suzie Liverseidge the nod at wing attack. After impressing in the 2021 season and bolstering Lightning’s depth, Liverseidge added a new dimension to Lightning’s attack against the Welsh side, injecting speed and precision at a time when energy levels were beginning to dip. Gaining her first ever appearance in the VNSL just seven days prior, young northeast talent Ella Bowen also took to court at goal defence and soaked in the famous Lightning home court atmosphere as the clock ticked down. Lightning sealed the deal as the final whistle sounded, claiming their second win of the 2022 season.

Lightning’s return home was momentous not only for the score line but their victory signified the first time a crowd has witnessed live netball since 2020 on campus.

Assistant Coach Olivia Murphy was nothing but grateful for Lightning’s ongoing support;

“Firstly, I want to say a massive thank you to everyone who turned out today, these girls deserved an audience, as champions from last year and as an opportunity to celebrate with all our fans. We came out of the blocks flying tonight, we wanted to show what we could bring but also be super sharp and I think we achieved that from the start.”

“We’ve built on our squad from last year, but we also have a stable attacking end which really helps. Getting all twelve of our squad onto court tonight helped to keep that intensity high but they all individually contributed which is fantastic to see.” Murphy commented.

“We had lots of great performances tonight but one of those was really standout for me from the first whistle right to the very end. I though Alice Harvey was outstanding and that’s why she is named Computacenter Player of the Match.”

Goalkeeper and England U21, Alice Harvey reflected on her side’s second victory of the season;

“A win is a win but to do it in front of a home crowd after two years is really special and takes it to another level. Thanks to everyone who came out and supported us and really brought the atmosphere. It was very special.”

Lightning are back on the road for round four to face Surrey Storm on Monday 21st February.

Join them when they return on Saturday 5th March as they welcome Saracens Mavericks to Loughborough University. Tickets are on sale now so don’t hesitate to secure your seats.