Lightning Netball stomp out Storm with confident victory on the road 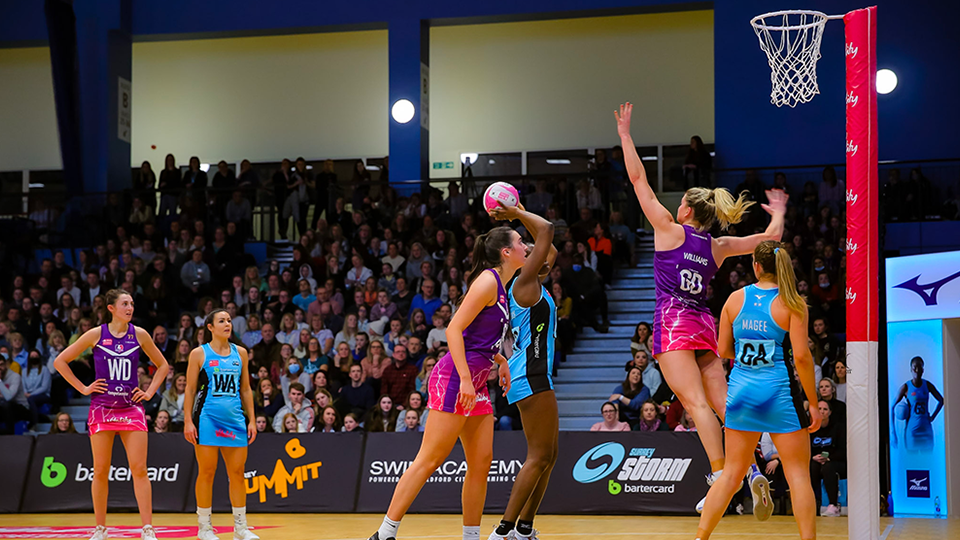 Loughborough Lightning secured a sensational 72 - 56 win over Surrey Storm on Monday night in round four of the Vitality Netball Superleague.

A return to their home court for the first time since 2022 saw Surrey Storm welcome a sold-out crowd of netball fans all eagerly awaiting the chance to witness the visiting 2021 Champions Loughborough Lightning in action. The highly anticipated return of Storm’s new signing and Lightning alumni Peace Proscovia to the UK league also meant the night’s clash boasted Ugandan internationals at both ends of the court, with fellow shooter Mary Cholhok stepping out for Lightning.

A ferocious start to the proceedings saw Lightning quick out of the blocks, claiming four points to the home sides one within a matter of minutes. Despite having gained experience in the world’s top league in Australia, Proscovia was matched in the circle by defensive duo Williams and last week’s MVP Alice Harvey who shut down the incoming pass, leaving Storm little opportunity to convert. That, teamed with confident feeds to Cholhok and Clark, saw Lightning storm ahead in the opening quarter.

An unchanged side stepped back out for the second quarter and despite a lead of thirteen Lightning continued with their relentless pursuit of victory, fighting tooth and nail for each and every ball. Wreaking havoc on Storm’s mid court, Vitality Roses international Beth Cobden hassled the circle edge, whilst two-time Superleague champion Fran Williams closed out any possible space within Storm’s attacking circle. At the opposite end of the court, Clark put on her famous cool, calm, and collected persona to sink ball after ball from out wide on the circle edge.

The second half got underway with Head Coach Vic Burgess giving Suzie Liverseidge the nod at goal attack to add a new dimension to Lightning’s already strong lead. Home side Surrey Storm came into the second half with a steely determination and continued to apply pressure in an attempt to close the gap. Maintaining composure, Cholhok continued to add to the board, whilst Cobden closed off the space around Storm’s circle edge. Fumbled passes from Storm gave Lightning the opportunity to convert and maintain their lead and control the speed of the game. Late changes in the quarter saw Hannah Williams take on the wing attack position in place of Lightning stalwart Hannah Joseph.

The final quarter saw young defender Ella Bowen step out at goal defence and a determined Lightning used everything they had left to step on the gas pedal and increase their lead once more. With seven minutes left on the clock and a lead of eighteen, Burgess rotated the bench once again, with Bowen moving to wing defence, Cobden taking on the centre spot and South African international Zan Vimbela offering a new option in defence. After another eye watering performance in the circle, Mary Cholhok took to the bench in place of Loughborough University student Emma Thacker, thus completing the final piece in Lightning’s execution. Bringing fresh energy to the mix, Lightning ticked down the clock and impressed on a tiring Storm, running out victorious as the final whistle sounded.

“It was a great win for us tonight, Storm came off a good win on Friday night over Bath so we expected them to come out in high spirits and I think for us to go out and have such a good first quarter was really pleasing to see.”

Managing once again to get her entire squad on court, Burgess noted the importance of such a feat so early in the season;

“We’re still exploring our combinations and what’s been great is that every time we’ve tried different combinations in both attack and defence, they’re doing everything we’re asking of them and building connections each week.”

Of her side’s aim to shut down former Lightning player and star signing for Surrey Storm Peace Proscovia Burgess commented;

“Our defence did a really good job against Peace tonight, there were times when the ball got in easily, but I think it’s clear they’re (Surrey Storm) starting to feed Peace and look in earlier. So, we had to do a really good job on getting arms over ball and disrupting the attacking players and I feel like we did that and turned over a lot of ball as a unit. I’m really proud of what they delivered tonight.”

Lightning are back on the road in just four days’ time, travelling to Glasgow to face fellow top four contenders Strathclyde Sirens in round five of the Vitality Netball Superleague.

“It’s a short turnaround for us this week but we’re excited, this week is all about reflecting on tonight but then quickly looking ahead to Friday and working on a few things that we can fix from tonight’s game ahead of that next match. We’re really looking forward to it.”

Join Lightning when they return home to Loughborough University on Saturday 5th March to face Saracens Mavericks. Tickets are on sale now.