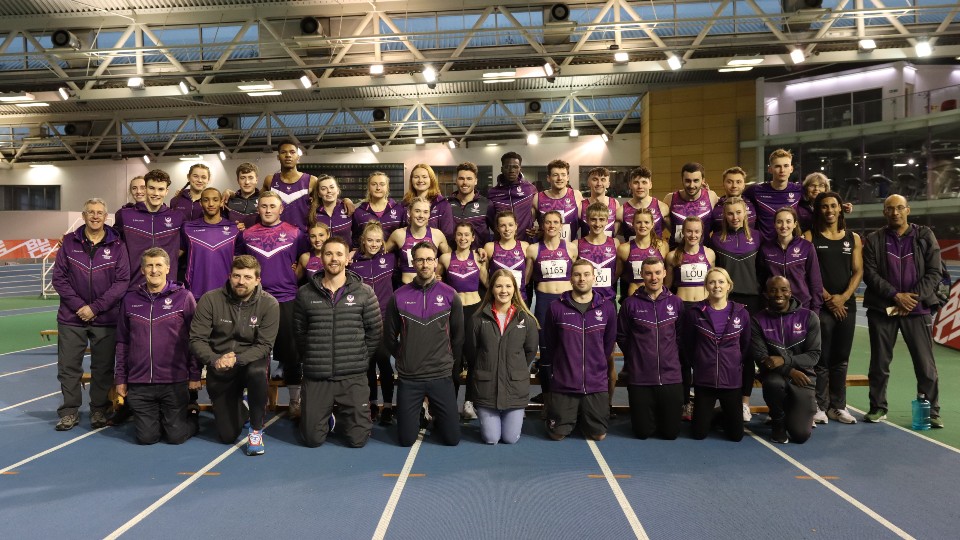 Day one (Friday) was all about the speed kings and queens, with the 60m and 60m hurdlers taking centre stage at the Sheffield EIS Arena.

As expected, Paralympic Champion Thomas Young (coach: Joe McDonnell) lived up to his pre-race favourite billing by taking the Men’s Ambulant 60m title in a PB 7.14, closely followed by Loughborough’s Emmanuel Oyinbo-Coker in 7.18, also a PB.

First year India Oates (McDonnell) took her own silver medal in the women’s equivalent, missing out on gold on the Raza points system (used to compare athletes of different classifications) by the finest of margins.

There were further gold medals for Joe Chadwick (McDonnell) and Josh Armstrong (Jerzy Maciukiewicz) in the 60m and 60m Hurdles respectively. Chadwick, having a PB of 7.06 before this season, had impressed at the early season Loughborough Opens, running 6.84 and 6.76 to look in contention for a strong final position, however, after easily navigating his heat and semi, he obliterated those times with a phenomenal 6.68 PB time to win the final and sit within the UK’s top 12 for 2022.

Armstrong was also a man in PB form, running faster every time he stepped on a track this indoor season. Another PB followed in his semi-final, before he broke the elusive 8 second barrier with a flawless performance to win the 60m hurdle crown with 7.97.

Fastest in the field and training partner Tom Wilcock (Maciukiewicz), competing in his first BUCS Championships and first season over the senior hurdle height, had a nasty clatter at hurdle 3 to finish in 6th place, but with both men now sitting in the UK Top 10 alongside alumni Ethan Akanni, Miguel Perera and Cameron Fillery, it looks to be an extremely exciting men’s hurdles final at the upcoming UK Championships this weekend.

Rounding up Friday’s action was a fine bronze for 200m specialist Georgina Adam (Benke Blomvkist) in the women’s 60m. A 7.40 PB in the semi-final was followed by a strong 7.45 in the final to miss out on silver by 0.002 of a second to Birmingham’s Diani Walker.

Saturday was all about qualification rounds, though the one final that did take place was a success for Loughborough’s Mark Mellor (Kate Rooney/Harry Coppell), who cleared a PB of 4.60m to take bronze. Team mate Ollie Herring (Rooney/Coppell) was also in PB form to clear 4.50m for 5th place.

With 25 finals taking place on Sunday, there were high expectations for Loughborough athletes, and the students more than delivered. Lily Hulland (Femi Akinsanya/Lukasz Zawila) started the day with a gold in the triple jump, saving her best jump until last to overhaul Liverpool University’s Emily Gargan by 3cm in the 6th round.

This was swiftly followed by no less than six medals in the shot and ambulant shot with Zak Skinner (Aston Moore) and Ben Pearson (McDonnell) taking the gold and bronze in the men’s mixed classification ambulant shot, Lydia Church (Jim Edwards) and Kirsty Taylor (McConnell) taking the gold and silver in the women’s equivalent, George Hyde (Stuart Carlaw)taking silver in the men’s shot and Ellen Barber (David Feeney) putting a season’s best of 13.31 for bronze in the women’s event.

Elsewhere in the field, it was difficult which event to concentrate on as pole vaulters Sophie Ashurst (Rooney) and Felicia Miloro (Rooney) were both taking medals in the A final with vaults of 4.10m and 3.90m respectively to take silver and bronze behind Loughborough-based Ellie McCartney (Rooney) of Brunel University, who herself had 3 solid attempts at a PB height of 4.30m.

At the same time, the men’s high jump was in full flow, with Kelechi Aguocha retaining his title from 2020 to win gold with a season’s best. Team mate and Italian International Nicolas De Luca, competing in his first BUCS competition, took the bronze behind Loughborough alumnus Rory Dwyer, now competing for Coventry University.

The afternoon saw back-to-back finals on the track, with a Loughborough presence in almost every one. Abbie Donnelly (Bill Foster)’s 3000m silver in a time of 9:23.77 was matched by Josh Lay (Matt Yates) who just missed out on gold by a thousandth of a second after diving for the line in a tactical 8:36.37. The next two races saw three medals for Loughborough with Natasha Harrison (Alex O’Gorman) and first year student Alex Cooper (Grant Barker) completing a 400m double for Loughborough with Emma Alderson (Nick Dakin) finishing with a bronze behind Harrison in the women’s race.

Alex Haydock-Wilson (Blomvkist) has been having a stellar indoor season so far, running personal bests over 60m earlier in the month, and backing it up with a dominant display over the 200m at BUCS. The 400m specialist led from gun to tape, with his 21.04 clocking the fastest time on British soil this year. He will compete in the UK Championships this weekend over the 400m, where he will attempt to secure his place in the GB & NI team for the World Indoors in Belgrade.

The final individual medal for Loughborough came from David Locke (Chris & Sonia McGeorge) in the 800m. The Wales International looked to be off the pace for the first three laps of the four lap race, but threw in a scintillating last 200m to move from the back of the pack into third position and finish with 1:51.67.

Their 1:27.01 was the club’s second fastest time in ten years and 2.5 seconds clear of Cardiff Met in silver. The women’s team didn’t have it quite so easy, with 400m champion Natasha Harrison coming in on the last leg to be faced with Birmingham’s Isabelle Boffey, fresh off a world class 1000m win the previous day at the Birmingham Grand Prix. But Harrison’s speed was too much for Boffey to overhaul, and the Loughborough women came home to win gold in 1:39.60 to Birmingham’s 1:39.97.

With such a dominant display, it was no surprise that Loughborough were men and women’s BUCS Indoor Champions yet again and look forward to even more success at the outdoor Championships in ten weeks’ time.