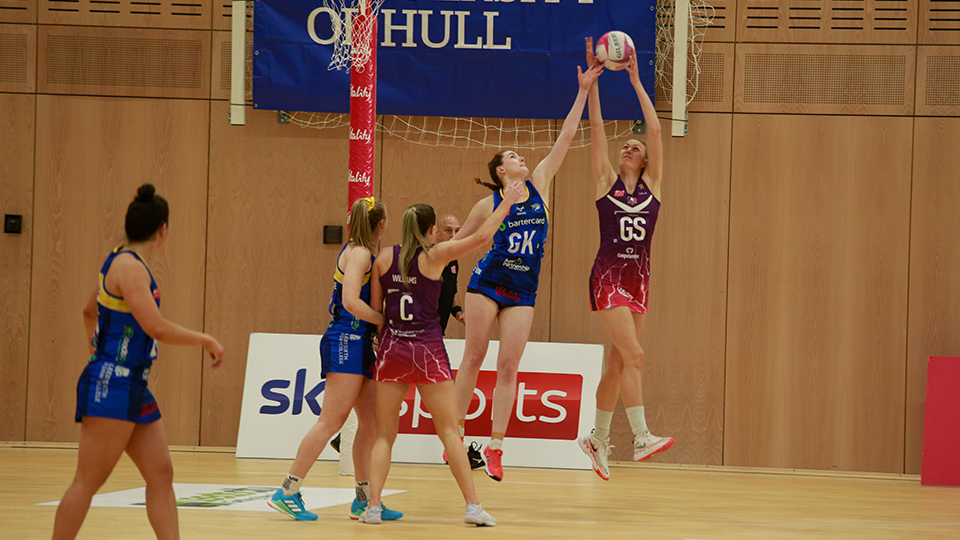 Loughborough Lightning secured another victory on the road on Friday night with a convincing 71 – 56 win over northeast side Leeds Rhinos.

Travelling to Allam Sports Centre to face Leeds Rhinos, the match saw the two sides meet for a rearranged match up originally scheduled for round 2 of the Vitality Netball Superleague (VNSL).

Lightning opened the first quarter with confidence, using strong powerful feeds from Lightning stalwart Hannah Joseph straight into Clark to quickly add to their tally. Treating the away crowds to her famous long bomb shots, Clark showed no signs of nerves as she continued to shoot from wide. Meanwhile Roses trio Fran Williams and Beth Cobden wreaked havoc on the defensive circle whilst South African international Zan Vimbela put pressure on Rhinos’ attack. Lightning ended the opening quarter ahead by six.

Making no changes to her side for the second quarter, Head Coach Vic Burgess aimed to push on further in the second quarter in a bid to quickly close out the match and rotate her bench. Increasing their work rate and brushing off any advances from Rhinos’ retaliation, Lightning maintained their lead throughout the second quarter with the help of Clark’s 32 goal success and ended the opening half still ahead by six.

Rotating the bench at the start of the second half, skipper Nat Panagarry returned to court after a short injury caused a hiatus from the league in round 11 . Adding another dimension to the defensive circle, Alice Harvey was also given the nod at goalkeeper, stepping out on court for the first time in her hometown of Hull. Leaving little time to adjust, Panagarry instantly upped in the intensity on court with Rhinos needing to quickly adjust to the pace and noise that the captain brought. The injection of fresh energy saw Lightning increase their lead heading into the final quarter.

Reaping final changes for the final quarter, captain Nat Panagarry took to the bench in place of Hannah Williams whilst young powerhouse and Loughborough University student Emma Thacker stepped out at goal attack. With a lead of thirteen, Lightning looked to keep their score line safe and hold off the home side for just fifteen minutes more. Pillars in the mid-court Cobden and Joseph kept the ship steady whilst Harvey and Williams remained relentless in their pursuit of a turnover. With just three minutes left on the clock, Burgess made her final change with Ella Bowen taking to court in the defensive circle. A bubble of energy, Bowen’s injection was all Lightning needed to run down the clock and bring the victory home.

With just one more victory standing in the way of Lightning and a confirmed top four spot, they are back on the road in just three days’ time to face Saracens Mavericks at Hertfordshire Sports Village on Monday 2nd May at 7pm for round 16 of the VNSL.

Be sure to tune into @lborolightning on Twitter to keep up to date on all the live action.