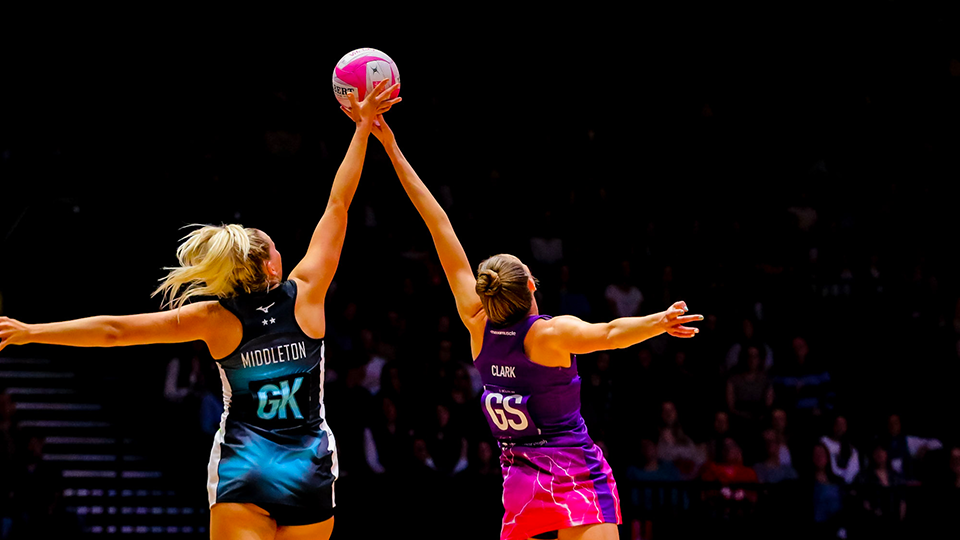 Loughborough Lightning fought hard to secure a 57 – 54 victory over Surrey Storm in the Vitality Netball Superleague (VNSL) on Saturday afternoon after an intense battle on court.

Stepping out for the opening match of the Vitality Netball Superleague Spring Showdown, Lightning were missing a few familiar faces with skipper Nat Panagarry and Ugandan super shooter Mary Cholhok both sidelined due to injury. Gaining the opportunity to step up, training partners Kelsie Taylor and Clara Miles were named as replacements in the match day squad.

Unable to produce the same fiery start fans saw from Lightning in their round 11 clash with London Pulse, away side Surrey Storm soon capitalised on Lightning’s slow start to push ahead. Aiming to shut down the confident feeds into Storm’s attacking circle and former Lightning shooter Peace Proscovia, Lightning’s defence ramped up their attack. Meanwhile Clark made a triumphant return to the side after recovering from illness and began Lightning’s points tally. It wasn’t enough however, and Storm ended the opening quarter ahead by four.

Eager to regain control of the game, captain and Lightning stalwart Hannah Joseph remained calm, reassured her junior counterparts, and used the experience of England Roses Fran Williams and Beth Cobden to deliver the ball through court to Clark and Liverseidge who were rotating the circle in an attempt to open up space. Leaving little room for movement in Storm’s attacking circle, Harvey kept close to Proscovia and made every attempt to tip the incoming feed. Lightning’s defiant return saw them push past the visitors heading into the second quarter.

Making changes to her attacking circle in the third quarter, Head Coach Vic Burgess gave 19-year-old Loughborough Universitu Student Emma Thacker the nod as she stepped into the goal attack position in place of Suzie Liverseidge. Adding height to the circle, Lightning needed to adjust to the new dynamic, despite Storm pressing down once again on the pressure pedal. Rotating the ball back to the line and remaining patient whilst they waited for a vital opportunity under the post, Lightning struggled to maintain their lead and it was Storm who pushed ahead by three heading into the final fifteen minutes.

With all to play for and just fifteen minutes left on the clock, Lightning retunred to court with a steely determination to shut down the match and retain their winning run. Amnd that’s exactly what they did. Throwing South African powerhouse Zanele Vimbela into the defensive circle, Storm found themselves with fresh legs and an instilled confidence in Lightning’s defence as Vimbela hassled each and every incoming ball. Also stepping into the mix and earning her Vitality Netball Superleague debut, young mid courter Kelsie Taylor recorded her first minutes on the superleague stage at centre towards the close of the match. Holding onto their lead and running down the clock, the final whistle sounded, and Lightning stole the show securing their tenth win of the season so far.

After an impressive display on court Alice Harvey was deservedly named the Computacenter Player of the Match.

“It was a slow start for us, we got better as the game went on but then had a little dip in the third quarter. We would have liked to have performed better than that, but ultimately, they came out in the final quarter and did everything that we were asking of them.”

“There’s always going to be an element of nerves when we have some youngsters in there, but I think those that did come on today did really well and I’m proud of them for the way in which they approached the game.” said Burgess

Lightning return to court in less than 24 hours for round 14 of the VNSL. Taking on Celtic Dragons at 13:45, the matchup is set to be another feast for netball fans.

“We’ll definitely reflect on today ahead of tomorrow’s game against Dragons, look at the things we did well but there’s also a few areas I think we can improve on so we’ll go this evening look at those areas, reflect and then look ahead to tomorrow.”