British motorcycle racers testing with Loughborough Performance ahead of 2020 Championship 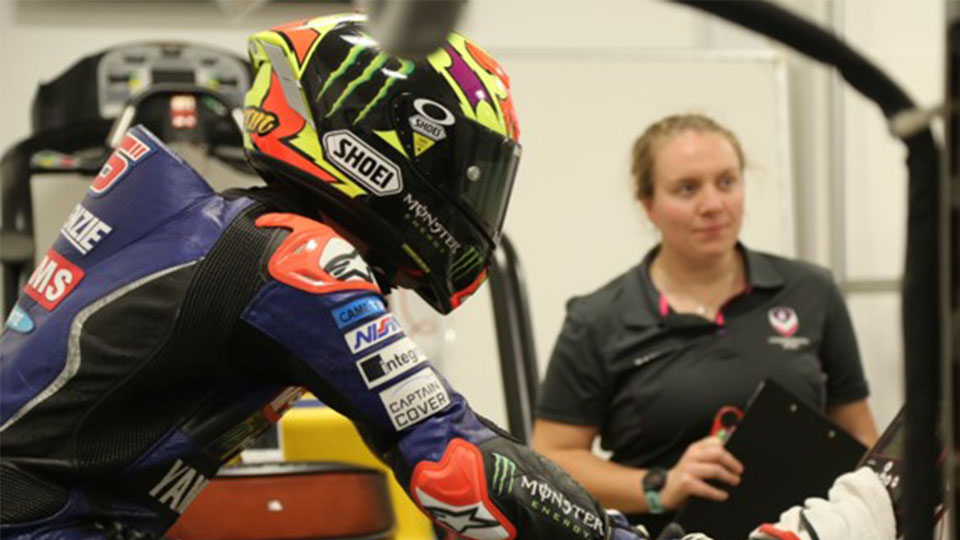 The British riders’ testing sessions included physio screenings, physiology testing, strength assessments, nutritional consultations and testing their physiological responses to the heat in the University’s physiology lab - all to improve every aspect of a rider’s performance and maximise athletic potential.

Having recently signed with Petronas SRT and in his second year in Moto2, 24-year-old Dixon hopes to be fighting for podiums this year and believes these sessions will prove beneficial to all three riders in terms of their individual racing goals.

“We wanted to try and better ourselves, so the next stage was to come here and do all these different forms of testing,” he explained.

“We’re looking to know what sort of direction to go in, knowing exactly what heart rate zones to be in at what times, what days we should be training on and how much recovery we need. It will also give us a good indication of what nutrition we need and where we are in terms of overall fitness.”

Dixon was also impressed with the campus and Performance Centre, saying: “You’ve got everything that’s needed here. It covers every aspect of every sport in every category.”

Brothers Tarran Mackenzie and Taylor Mackenzie will be competing against each other in the British Superbike Championship in 2020, with McAMS Yamaha and Bennetts Suzuki respectively. Both have also been seeking the guidance of Loughborough’s performance experts in identifying ways in which they can improve physically.

Tarran, who finished fifth overall last year, is aiming to win the BSB Championship and will be joined on the grid by Taylor, who is moving back into the superbike class this year.

They were visibly enthusiastic by the quality of the equipment and level of analysis available at the University, with Taylor stating: “Most places haven’t got the facilities that Loughborough has here.”

Having never undergone such testing before, the three riders’ use of Loughborough’s performance services highlights a significant increase in the number of motorsport teams, as well as individual racers, utilising the University’s unrivalled facilities and knowledge in developing athletes.

“A lot of bike racers that we know have come here, so we thought it would be important to do it as well,” explained Tarran.