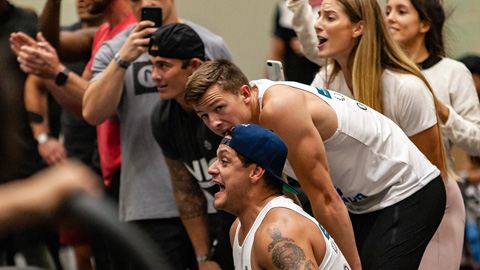 Loughborough University hosted the first ever National Fitness Games, which saw over 120 competitors battle it out to be titled the fittest team in the UK

Loughborough University hosted the first ever National Fitness Games on Saturday 15th September, which saw over 120 competitors battle it out to be titled the fittest team in the UK.

Host on the day was sports presenter Gabby Logan, who said of the event:

The whole event was just so professional, and the facilities are incredible. For a student to come here at 18 years old and to have this at your disposal – wow!

Athletes competed across several team categories, scoring as many points as possible to claim the title of the UK’s Fittest Team in elite, open and mixed team categories.

Your 2018 fitness champions are:

I had never been to Loughborough before and I cannot believe the facilities, they’re absolutely outstanding. That’s one of the reasons the National Fitness Games were delighted to partner with Loughborough. We wanted to set the bar very high and with a reputation second to none, this was the best place to start.

It’s been a brilliant day and the feedback is phenomenal from all the athletes and that’s what’s important. They’ve been blown away with the professionalism of the event and all the different challenges of the competition, with all agreeing the facilities have been spectacular.

I think the competition is great – we’ve managed to showcase how good we are against top athletes. I think today has helped improve the image of fitness competitions especially with Loughborough being high profile with performance sports. The facilities here as normal have been epic. It just really works for an event of this standard and adds to the professional feel.

Competing against Jamie was another member of the Loughborough family in the form of alumnus Tom Bliss. Having retired from professional rugby, Tom now works as a coach for Wit Training and is a Personal Trainer for Gym Box.

Since graduating I played professional rugby for two years but had some serious concussions so focused on a career in personal training and the fitness industry, which has gone really well so far. The National Fitness Games have been excellent, and I really enjoyed the programming. It’s been a good test of multiple dimensions. It’s been very nostalgic coming back to Loughborough, especially Powerbase. It feels so weird but so nice and I absolutely will keep it free in the diary to return next year.