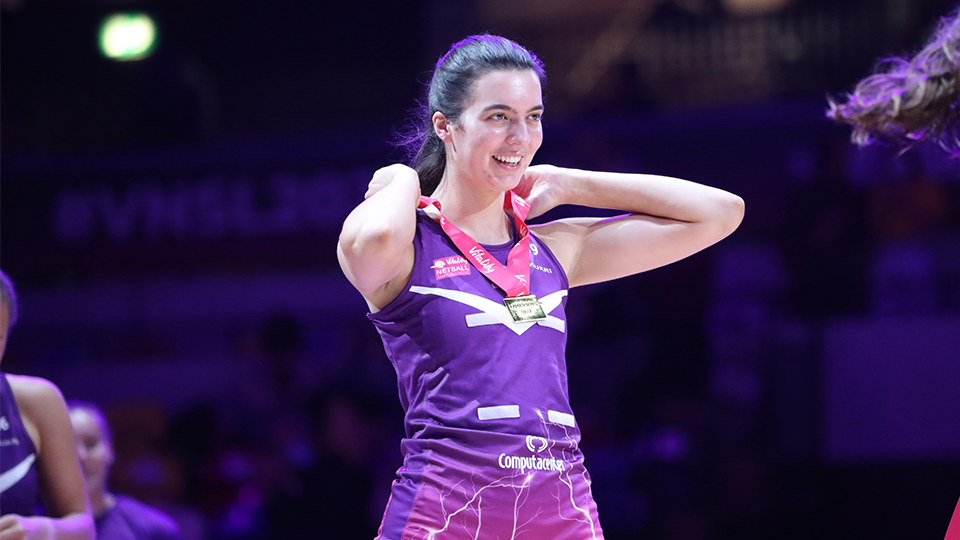 Harvey and Haynes will once again don the purple dress in 2022 as Lightning look to defend last season’s title win.

Gaining momentum throughout the season, Harvey was an instrumental component in Lightning’s success last year, learning and growing under the guide of fellow defender and VNSL stalwart Sam May who recently retired from the sport.

Now, making her mark on the international stage with the England U21s programme, Harvey is no stranger to what it takes to compete at the top level of netball.

Looking at the season ahead, she commented:

“I’m really excited to re-sign for Lightning because we finished the 2021 season in such a good place, and I look forward to continue building on that with the group this year.

“I hope to develop new relationships with the defensive unit and continue learning and developing my own game.”

"Alice had a fantastic season last year and I know she is ambitious to make the GK bib her own this season. Every year we see such huge growth in her game that it's exciting to see what she's capable of in 2022.”

Joining Harvey in the defensive end next season is Jess Haynes who made her mark on the league late last season.

When injury struck the Lightning side Haynes was called up from the Lightning U21s squad and within a matter of days made her first appearance on court.

Exerting no signs of nerves, Haynes racked up a turnover just minutes into her debut and has been rewarded in 2022 with a place in the Superleague side from day one.

“Jess came into the squad strongly when needed last season. Her competitiveness will push all the defenders to be on top form whilst she brings positivity to everything she does," said Francis-Bayman.

Balancing her time across her studies at Nottingham Trent University and her training with both the U21 and VNSL squad, Haynes is looking forward to what the season brings.

She said: “I am so excited to be returning to Lightning off the back of such an amazing season last year. Being involved in such a positive environment, both in training and competition, allows a strong team to go and win and I can’t wait to see where the season will take us.”

The announcement of Alice and Jess confirms six of Lightning’s fifteen spots for 2022. With more announcements in the coming days, be sure to keep your eyes peeled to find out who will be joining them in the famous purple and pink dress next season.