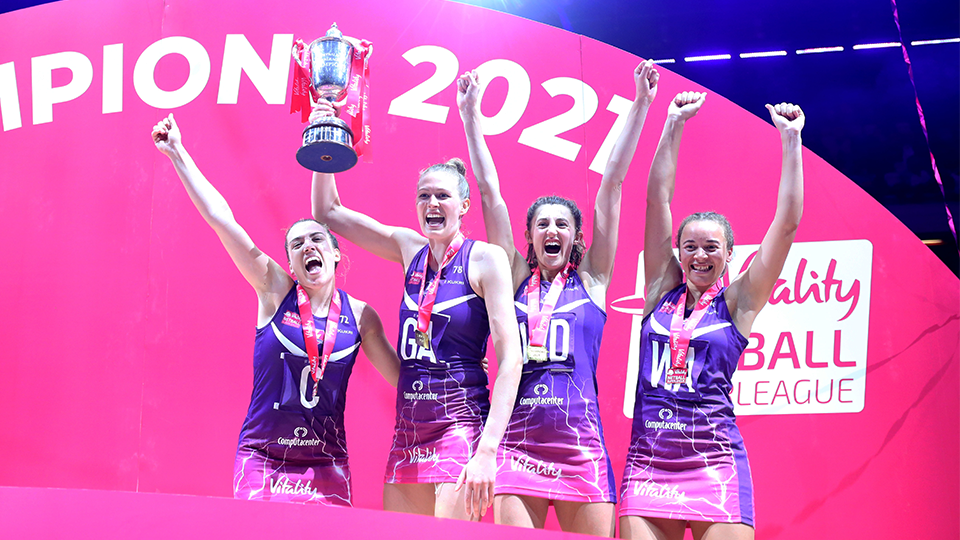 Loughborough Lightning kick started the 2022 Vitality Netball Superleague (VNSL) signing window today with confirmation that four Vitality Roses will return to the Loughborough University based side for the 2022 season.

Title winning captain Nat Panagarry, Loughborough stalwart Hannah Joseph, duel international Ella Clark and Commonwealth Games gold medallist Beth Cobden have all committed to the upcoming season and will look to pick up where they left off after claiming Loughborough’s first ever VNSL title in 2021.

Leading from the front in the 2021 title winning campaign, skipper Nat Panagarry will don the famous purple dress for her sixth season in 2022.

“The culture and the players and staff that are at Loughborough have helped me grow and learn so much and I still want to do that and keep doing that. I think people expect me to move back up north every year, but right now it just feels right for me to still be here at Lightning. I can’t wait to get back going with the girls and get on court and I’m excited to see how we approach the season and handle the pressure that comes with being Superleague winners.”

Mid court powerhouse Hannah Joseph experienced a 2021 like no other. Having represented the side for almost a decade, Joseph not only experienced Superleague success but also received a call up from England Roses Head Coach Jess Thirlby and has spent the latter of this month representing her nation in the Cadburys Test Series against New Zealand, where the Vitality Roses claimed their first ever series win down under.

“Being able to learn from the coaches we have at Loughborough and retaining the bulk of the squad was a key factor for me. We want to not let last year’s win be a one off, we want to be that side that does it back-to-back and are real contenders year in year out.”

Hannah will look to continue her role as Director of Netball at Uppingham School whilst juggling her domestic and international playing commitments.

Returning to Loughborough Lightning in 2020 after a series of injuries and a stint with Suncorp Super Netball side Adelaide Thunderbirds, Commonwealth Games champion Beth Cobden made the comeback of all comebacks, quickly establishing herself as one of the strongest defenders in the VNSL and scooping up numerous Player of the Match Awards before claiming the coveted VNSL Player of the Season award for 2021.

“The environment at Loughborough is great, we’re so lucky and it’s so enjoyable to be there. I think we’ve relieved some of the pressure on us now, we lost two finals in a row and the pressure was building on us to get over the line. Now we’ve won and got Loughborough their first title we know we can do it; we can take confidence from it and it’s going to be an exciting year to build as a squad.”

Duel international Ella Clark is also no stranger to what it takes to perform at the top, having claimed caps for her country in both Basketball and Netball. Now with her feet firmly back in the Vitality Roses set up, Clark is looking to defend the VNSL title whilst preparing for the upcoming Commonwealth Games in Birmingham in 2022.

“We’re defending champions, and no-one wants to walk away from that, we want the challenge of defending the title and the new challenges that come with that.

Boasting over 50 caps between them, Head Coach Sara Francis-Bayman commented on their ability and experience as leaders and her desire to maintain consistency within the squad.

"It was crucial that we kept the core of the title-winning team together and these four players epitomise the growth of the team over the last six years. They were important for us last year and will be again this season as they bring back more international experience with them."

The 2022 season not only brings new challenges for the Lightning side but also the welcome return of the #LightningFamily to Loughborough University.

“A few of the girls that have played for Lightning for two years have yet to experience a home crowd, so I’m excited for them and I’m excited for the fans to see us in action and to feel and hear their support again.” Panagarry commented.

Cobden was also keen to share the squad’s desire to have fans back.

“It’s been such a shame that we’ve not been able to have the fans at the games last season, I know they were able to watch everything on television and a lot of people really enjoyed that but now it’s time for them to get off their sofas and come back to Sir David Wallace because we’ve really missed them!”

With a further 11 players yet to be revealed, be sure to keep your eyes peeled on social media over the coming days to find out who else will join Francis-Bayman’s star studded line up for 2022.