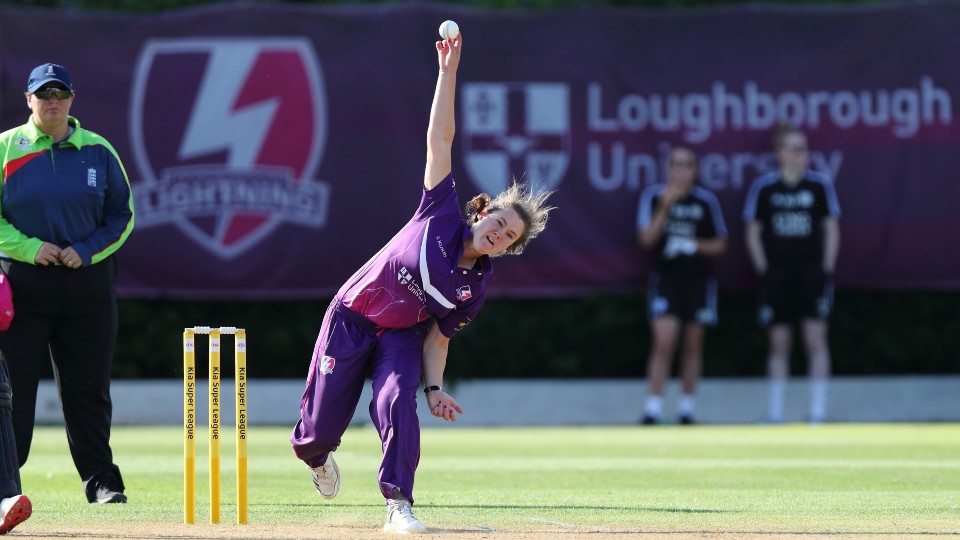 Kathryn Bryce will return to Lightning Cricket for the 2022 season. Image provided by Still Sport Photography.

Lightning Cricket has announced its retained list for the 2022 season with Kathryn Bryce, Sarah Bryce, Lucy Higham, and Bethan Ellis all returning to the side.

The quartet will be joined by spin bowler and Loughborough favourite Kirstie Gordon while right-handed batter Marie Kelly’s arrival from Central Sparks will strengthen the squad yet further.

Lightning will be buoyed by Kathryn Bryce’s return as the Scotland international scored 353 runs with an average of 50.42 in the Rachael Heyhoe Flint (RHF) Trophy last season. The Loughborough alumna was also awarded the overall Most Value Player (MVP) in the tournament.

Fellow Scotland star and current Loughborough student Sarah Bryce will also return to the team in fine form. The 21-year-old scored 202 runs in the RHF Trophy and performed well for the Oval Invincibles in last summer’s Hundred competition.

Lucy Higham will also wear Lightning colours once again after hitting 101 runs and taking five wickets in the RHF Trophy. Bethan Ellis will also look to impress after unfortunately spending last season on the sidelines with injury.

“It's brilliant for me to have been awarded a contract again this year giving me the opportunity to continue to concentrate on my cricket all year round. But also, from the team’s perspective gaining a sixth contract is huge to continue growing the women’s game and give more people that opportunity.

“Hopefully, in the years to come, we'll see a full squad of fully professional players and be able to show how far the women’s game can go.”

“We are delighted to have retained the services of four of last years contracted players and added further quality to the squad with the signings of Kirstie Gordon and Marie Kelly.

“Having the opportunity to have a sixth professional contracted player shows the commitment from the ECB to continue to drive the women’s game forward and we are very excited about the season ahead.”