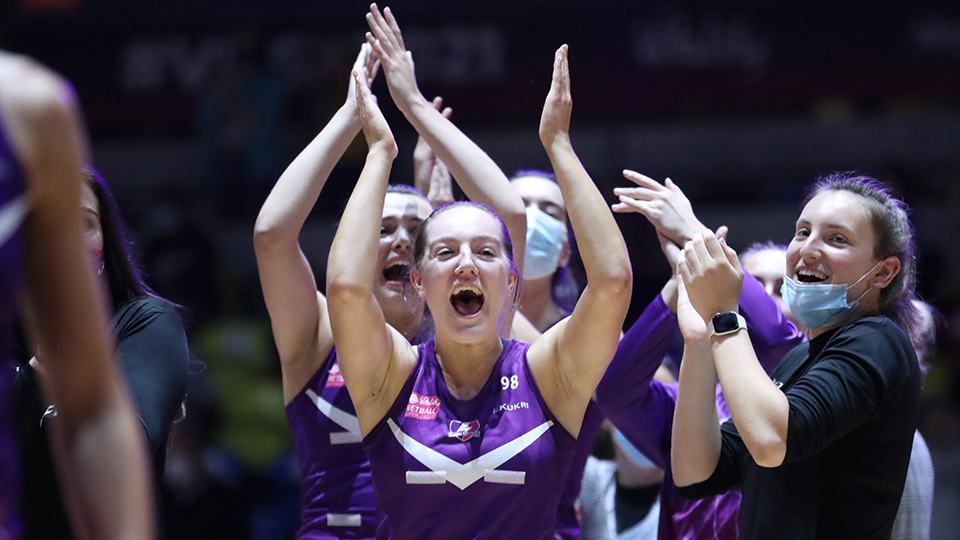 Loughborough Lightning has revealed yet more of its line-up for the 2022 Vitality Netball Superleague (VNSL) with champions Hannah Williams and Suzie Liverseidge returning to the side.

Loughborough University student Suzie Liverseidge will once again balance her studies in Sports Technology with her training programme as she continues to represent England on the international stage at U21 level.

With fellow teammate Ella Clark splitting her time between Basketball and Netball early in the 2021 season, Liverseidge was handed a golden opportunity to gain vital court time and finally show the league what she could do – and she hasn’t looked back since.

Her tenacity and work rate, which mirrored that of Vitality Roses mid courter and teammate Nat Panagarry, saw Lightning offer a new combination in the attacking circle producing a number of impressive performances.

Now, set to return as a Superleague champion, Liverseidge looks ahead to the new challenge:

“I’m just really excited to build off last season, both as a team and what I can contribute personally.

“I think it’s the perfect place for me to continue to learn from the coaches and players around me, and I love the environment here. The expectations are slightly higher this year but I’m looking forward to seeing what we can put out on court.”

Hannah Williams, who also features in England’s U21s side, will balance her training with study at Nottingham Trent University in 2022.

Despite her young age, Williams quickly gained opportunities on court and through her experience with the England age groups was often called upon by Head Coach Sara Francis-Bayman.

“I hugely enjoyed my time last year,” she said.

“I really love the environment at Loughborough, the squad and staff have been amazing. I really feel like I’ve grown and learnt so much in my short time here.

“I really want to continue with the standards and highs that we ended on last season, building on our connections as a team and creating new ones. And, of course, we want to be lifting the trophy again!”

Head Coach Sara Francis-Bayman has often been credited for her ability to rotate the bench during key moments, and with Williams’ and Liverseidge’s impact on court throughout the season they quickly became a key driver in Lightning’s 2021 success.

Their return to the purple dress in 2022 will be welcomed by many as Francis-Bayman explained:

“Suzie had a breakout year last season, and I can't wait to see how she builds on that this year. Hannah Williams has shown that she belongs at Superleague level and I'm keen to see her push for more game time this year.

“They are both vital members of our squad and demonstrate how bright the future of this team is.”

With over half the squad now revealed for Lightning’s 2022 title defence campaign, all eyes should be kept firmly on their channels next week as we tune in to see who will be joining our champions on court next year.