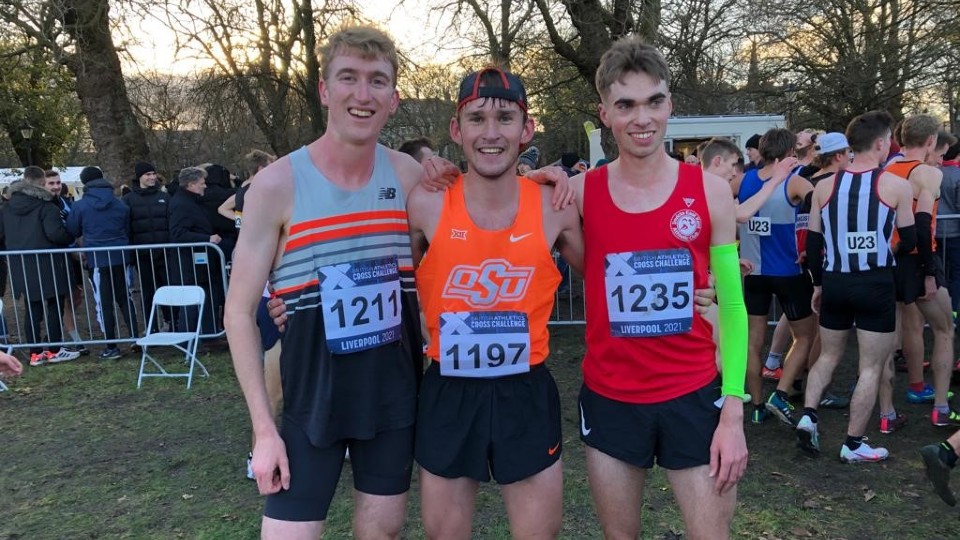 (Left-right) Tom Mortimer, Rory Leonard and Matt Stonier at the end of the race in Liverpool.

Five Loughborough-linked athletes have been selected to compete for Great Britain and Northern Ireland at the European Cross Country Championships in Dublin next month (12th December).

All five athletes secured their spaces at the Liverpool British Cross Country Series event on Saturday 27th November which also doubled as the European Trial.

In the women’s event, recent Loughborough MSc graduate Hannah Nuttall also finished in automatic selection position as she took 2nd place. The trio will now travel to Dublin to compete in the mixed short course relay.

The women’s long course race was won in emphatic style by PhD student and Tokyo Olympian, Jess Judd. She will be joined by fellow PhD student Abbie Donnelly who finished in third place at Liverpool, and the duo will hope to replicate their 2020 XC BUCS winning ways when they team up with four other athletes to compete in the senior women’s race.

The men’s and women’s long course races also incorporated the U23 trials, and with Matt Stonier finishing in 12th place overall and third U23, his selection was guaranteed.

Recent graduate Tom Mortimer and former student Rory Leonard will join Matt in the team after finishing 1st and 2nd U23 respectively. Fellow recent graduate Cari Hughes will be another familiar face to the Loughborough team members as her 5th place finish in Liverpool has secured her selection into the U23 women’s team.

The full team selection can be found on the British Athletics website: 40 ATHLETES SELECTED TO REPRESENT THE BRITISH TEAM AT THE 2021 EUROPEAN CROSS COUNTRY CHAMPIONSHIPS | British Athletics