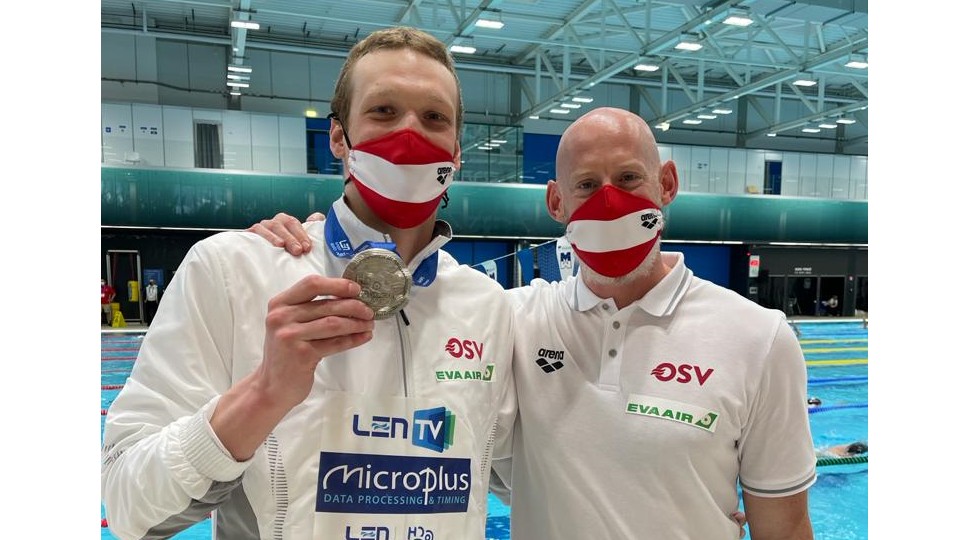 Swimmers from Loughborough University will return to campus in high spirits after a stunning collective performance at the European Aquatics Championships in Budapest.

The Olympic qualifier tied for gold in a thrilling Women’s 100m Butterfly, finishing in a rapid time of 57.37. Wattel continued her fine form throughout the Championships, adding a silver to her collection in the Women’s 100m Freestyle on Saturday (53.32).

Wattel was also part of France’s 4x 100m Women’s Relay that secured an excellent bronze on the opening day.

Marie was understandably happy after a great week of competing:

“I am extremely happy about my week in Budapest. Being European champion is a great achievement and a dream come true. The week provided me with lots of learning opportunities to take forward into my final preparations towards Tokyo and I am excited to be competing at the Olympics in two months time.”

Wood was part of the GB 4x100m Freestyle Relay team that claimed its first title in 94 years as the quartet of Wood, Lucy Hope, Anna Hopkin, and Freya Anderson set a new British record of three minutes 34.17 seconds.

Wood added to her gold medal haul on Tuesday as the GB Mixed 4 x 200m Freestyle team finished in first place in a time of 7:26.67.

The 22-year-old continued her fine recent form with an excellent swim to secure silver in the Women’s 200m Individual Medley on Saturday. Wood looked in great condition finishing in 2:10.03 to take second.

Wood also put in a huge effort to claim fifth place in the Women’s 200m Breaststroke on Friday.

Luke Greenbank continued to turn heads as he came home with both a gold and silver medal. He was part of the impressive GB Men’s 4 x 100m Medley Relay (3:28.59) that took first place on Sunday ahead of Russia. This was the icing on the cake after a strong swim saw him take silver in the Men’s 200m Backstroke (1:54.62) the day before.

Austria international Felix Auboeck secured his first medal at a Championship meet with a brilliant silver medal swim in the Men’s 400m Freestyle on Monday. Felix finished in a time of 3:44.63 and was thrilled to make the podium:

“A childhood dream came true winning my first medal at a Championship meet. Now I am excited to get back to Loughborough to put the last blocks of work in, ready for the Olympics.”

Louise Hansson was another Loughborough athlete who came away with a medal after claiming a well-deserved bronze in the Women’s 100m Butterfly (57.56). Louise was also part of the Sweden team that narrowly missed out on a medal in the Women’s 4 x 100m Medley Relay, finishing fourth (3:56.54).

Louise also produced a brave swim to finish sixth (1:00.04) in the Women’s 100m Backstroke on Friday.

Litchfield also swam brilliantly in the Mixed 4 x 200m Freestyle and the Men’s 4 x 100m Freestyle heats as GB notched up yet another medal – silver this time.

Andreas Vazaios was unfortunate not to hit the podium as his Greece team finished fifth in Men’s 4 x 100m Freestyle. Andreas was also edged out in the Men’s 200m Individual Medley, where he finished seventh.

Final year Physics degree student Emily Clarke also finished a creditable fifteenth in the Women’s 10km Marathon event at Lupa Lake. In what was Emily’s first major international championships –and only the third 10km race she has ever competed in:

“It was a great experience, especially racing among such an exceptional field, and I’m excited to see where open water can take me in the future,” she said.

It was another strong showing from Loughborough alumni with Sarah Vasey helping GB Women’s 4 x 100m Medley Relay team to gold after swimming in the heats. Sarah also looked impressive in the Women’s 50m Breaststroke, finishing just outside the medals in fourth (30.23), and a respectable sixth in the Women’s 100m Breaststroke.

James Wilby added to Loughborough’s medal tally with a bronze in the 100m Breaststroke, finishing well in 58.58 seconds.

Elsewhere, James McFadzen made his Senior International Debut for GB and finished tenth in the Men’s 200m Individual Medley but sadly didn’t progress to the semi-finals due to the two per National rule. Daniel Wiffen, the 19-year-old Irish senior record holder, finished eleventh in the Men’s 800m Freestyle as he gained vital competition experience ahead of the Olympic Games.

After a storming Championships, Loughborough can feel proud that if it were a country, it would have finished fourth overall in the medal table on the number of total medals won.