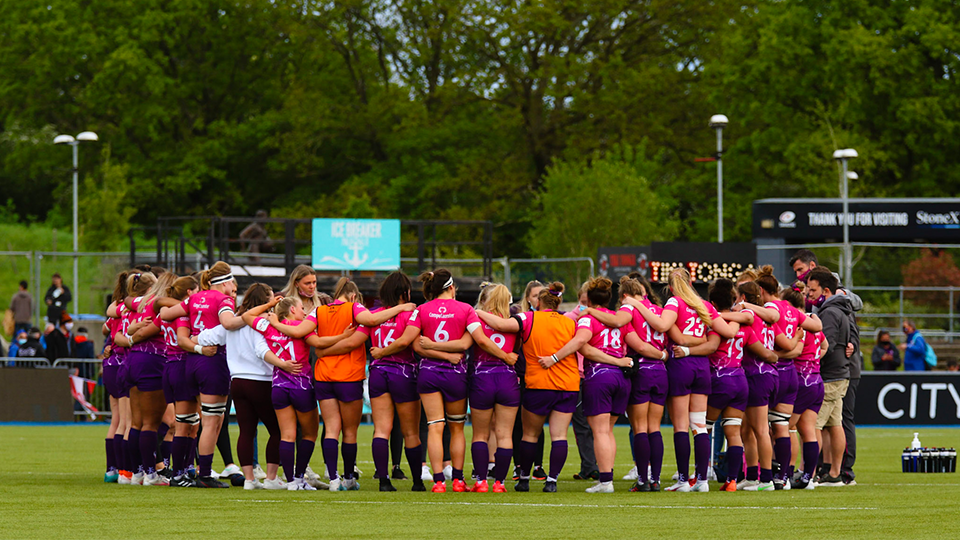 Davies clinches two tries as Lightning fall four points short against Saracens in their search for a spot in the Allianz Premier 15s final.

Lightning made the trip down the M1 to face top of the table Saracens for what was always going to be a hard-fought game. With fans allowed in the stadium for the first time this season, it was in front of a 1400 strong crowd that Lightning ended their 2020-2021 Allianz Premier 15s campaign.

Firing on all cylinders, Lightning looked dangerous, taking the lead early on. From the kick-off, it took only minutes for the away side to turn the ball. Having won the penalty a sharp looking forward pack marched the ball across the try line, with Lark Davies adding to her impressive total this season and Emily Scarratt adding the extras.

Not to be outmuscled in front of their home crowd, Saracens retaliated quickly with a try of their own through the Poppy Cleall, evening up the score.

With 18 minutes gone, a no look pass from Emily Scarratt set Rhona Lloyd free to tear through the Saracens backfield, covering half the pitch Lloyd dotted down next to the posts, putting her side ahead yet again.

From the kick-off Saracens found their way back to the 5m line. Showing their patience in the danger zone it was not long until the home side broke through the Lightning defence leaving both teams all square yet again.

After some fierce play from both teams, it was Lightning that was caught napping. A quick penalty from Saracens saw them sail across the line before Lightning had time to set up their defence, taking the lead for the first time.

Capitalising on a forward pass by the Saracens attack, Helena Rowland found touch in the corner. Looking dangerous with ball in hand, Lark Davies scored her second try of the game from the back of the driving maul, ending the half with Lightning trailing by only 2 points, 19-21.

Early in the second half, Saracens extended their lead, when a loose ball was collected and driven over the try line by Poppy Cleall.

With possession switching between teams frequently, the second half was an exciting spectacle and with 5 minutes left on the clock, a 14-man Saracens side could not stop Lightning march across the white-wash for a fourth time, closing the gap to just four points.

It was, however, too little too late as the clock ended the red zone, Saracens kicked the ball into touch securing the win and their place in the Allianz Premiership 15’s final.