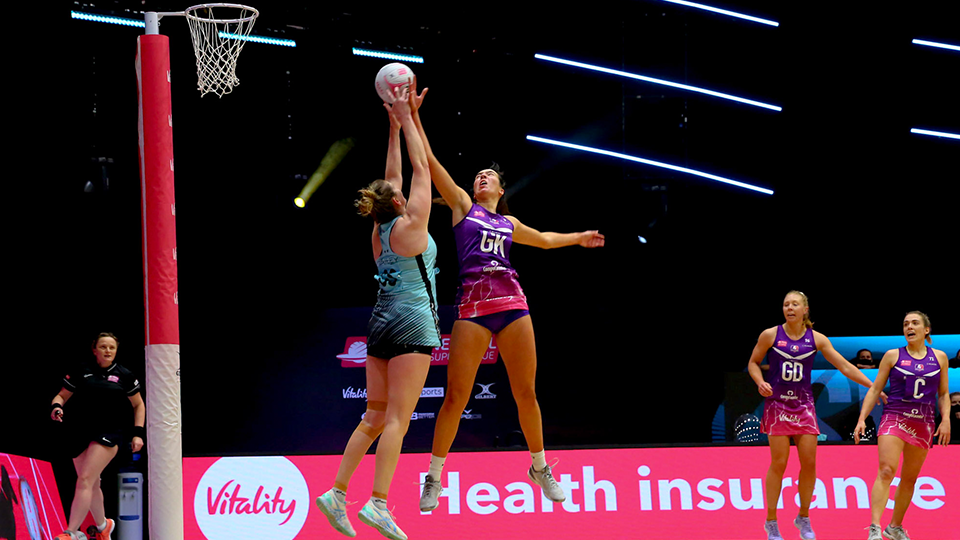 Loughborough Lightning added another win to their board on Saturday afternoon, with a sensational 56 - 37 win over Surrey Storm in round five of the Vitality Netball Superleague, further cementing their position at the top of the table.

Returning to court after a bye weekend, Lightning were eager to maintain their momentum and keep up their winning run.

Speaking ahead of the clash, Head Coach Sara Bayman commented:

“We need to make sure that we come out of a bye week really strong, and that's going to be the test this week."

Crediting their depth within the squad as their key to success so far, Bayman kicked off the double header weekend with arguably her strongest seven on court. With goal shooter Mary Cholhok, who currently claims the title of leading goal scorer in the league, combining with long bomb queen Ella Clark, Lightning’s shooting circle soon became the focus for Storm’s plan of attack.

With the ruthless defensive unit of Harvey, Cobden and May creating havoc at the opposite end of the court however, Storm’s own attack soon began to falter with Lightning closing the opening quarter with a strong seven goal lead.

The second quarter got underway quickly with Lightning firing on all cylinders. Eager to widen their lead to allow opportunity to rotate the bench, Lightning’s mid-court duo of Cobden and Panagarry kept their arms wide and the pressure on in order to shut down Storm’s incoming ball and force unwanted error.

The second half got underway with Lightning making changes to their side. With another clash against London Pulse coming up the following day, Bayman rotated the bench, keen to give all members of her squad crucial game time and the starting athletes the opportunity to rest, leading into day two. With young midcourter Hannah Williams taking captain Nat Panagarry’s centre bib, Loughborough University student Suzie Liverseidge also stepped out and into the goal attack spot. Leaving little time for Storm to adjust to the changes, Lightning’s new rotating circle gave their playing style a quick update allowing the space needed to push on and further widen the gap.

Delivering another shake up for the opposition, Lightning’s final line up saw Clark return at goal shooter, Panagarry to wing defence and Liverseidge to wing attack. Earning her first appearance in the 2021 season, Annabel Roddy also stepped out to take on the goal keeper position, following another sensational performance from league leading defender Alice Harvey, who continues to top the table with most intercepts in the league so far. With all twelve of their side adding crucial minutes to their belt, the dominant side ran down the clock and closed the game as victors.

Competing for Lightning for her ninth consecutive year, wing attack and Loughborough University alumna Hannah Joseph provides stability and consistency to the side throughout their campaign, and with confident feeds into the circle and another strong display, she rightfully earnt herself a player of the match award.

Reflecting on the win, Joseph commented;

“There are no easy games in this competition, we can’t look too far ahead we just need to prepare for each game as they come. I think we’re really lucky, we’ve got loads of options within the squad and it’s a credit to the team today. Everyone that came on, did a job and slotted in really well. So, it’s nice that we had a 12 that could all take to court today and make an impact.”

Now boasting five wins on the bounce, Head Coach Sara Bayman claims there’s still work to be done for her side:

“It was a bit of a frustrating game, we got whistled out of the game in defence, so we need to look at that. I think Storm did a good job of disrupting our flow and I’m pleased we came through it.”

“I think we’re getting better at playing games where teams disrupt us and we’re still able to execute to a good standard. We knew we were going to come up against sides that would do that to us, so for us to adapt to that situation and still grind out a win is really pleasing.”

“I think it’s important that when players are training well that they’re rewarded with game time and I’ve got a selection headache at the moment as every member of the squad is stepping up and putting their hands up to be a part of it.”

With little time to reflect, Lightning are back in action on Sunday 14th March as they face London Pulse in game two of the double header weekend.

Catch all the action live on Sky Sports YouTube from 4pm.

View all of Lightning's 2021 fixtures here.