Loughborough Lightning made history on Sunday night claiming their first ever Vitality Netball Superleague title with a triumphant 49 - 32 victory over Team Bath.

In the sixteen years of the franchise’s existence, Lightning had made it to three grand finals prior to 2021 but never managed to cross the line, and after a confident twenty goal win in their semi-final the previous day, Lightning were looking to rewrite history and claim their first title.

An explosive start to the match saw Lightning quick off the blocks with leading goal scorer Mary Cholhok soon scoring the opening point. Giving it everything they had, Lightning rewrote the slow start to their semi-final match, playing with a ferocity of a side eager to bring home the title. Staying in control and keeping the ball safe, despite the intensity of the opposition, Lightning ended the opening quarter ahead by four.

The second half saw Lightning continue with their rampage. Oozing confidence they stepped up a gear and chased down each and every single ball. Leading her side by example skipper Nat Panagarry shook off any signs of nerves and kept her side focused and keen to execute their game plan. Lightning widened their lead and headed into the half on top.

The third quarter saw no signs of the intensity slowing, as Lightning fiercely continued to contest the game and keep their foot firmly on the gas. Despite the arena having just 1000 fans, the noise from the crowd was electric and with Beth Cobden wreaking turnovers across the entire breadth of the court, fans were treated to the ultimate netball showdown.

With just twelve minutes left on the clock, the noise in The Copper Box Arena rose to new levels as ‘netballs coming home’ began to sound out. Goal Keeper Sam May, who recently announced her retirement at the close of the season, had just minutes left on the clock and minutes left in her glittering career. Ready to go out on a high, her side remained in control, extended their lead and comfortably brought the win home. Tears of joy overwhelmed the crowd and team after and a difficult year and a long season, Lightning were crowned 2021 Vitality Netball Superleague Champions.

Suffering heartbreak in 2018’s Grand Final, Beth Cobden has since overcome two ACL reconstructions and returned to court in 2021 stronger than ever, and last week was named the VNSL 2021 Player of the Year. Further adding to her trophy cabinet, she also picked up the Grand Final’s player of the match award to close off an incredible comeback season. 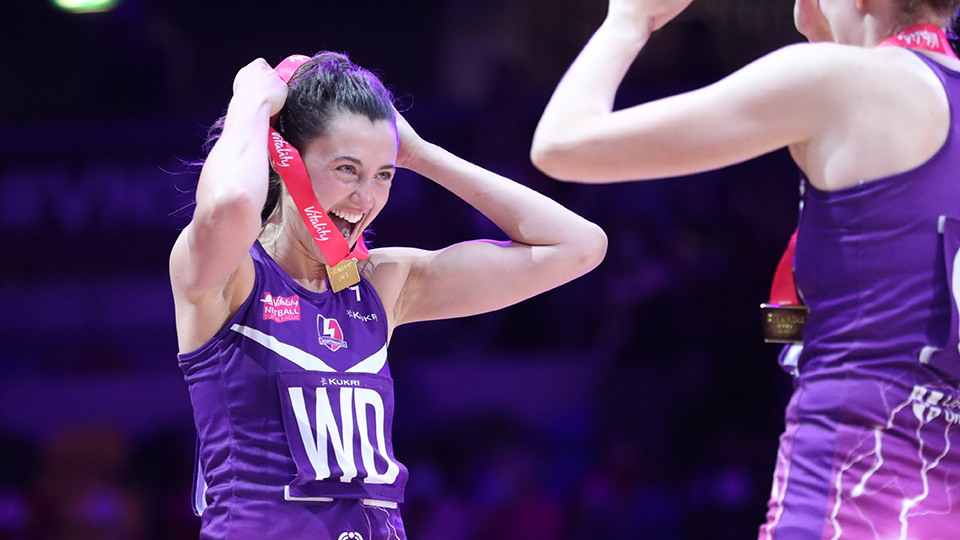 “If someone had told me this time last year that I would be in the final and that we’d win, I’m just so happy, it’s all been so worth it. We wanted to do this for the club, they’ve not won it before, the girls who have been there for years, who have been there at the end of a final loss, it was just great to get it for Loughborough.”

Beth believed her side’s ability to play their own game was their key to success;

“We just believed in ourselves, stuck together, stuck to what we know we can do well and it all came together today.”

Also making history was head coach Sara Francis-Bayman who in her first ever Grand Final as a coach scooped up the coveted title.

“It was such a different feeling today to yesterday, the girls were excited about today’s game they looked like they played with much more freedom. There are so many stories in this team, it was Sam May’s last game, Beth Cobden coming back from her injuries, those guys who have suffered two or three final losses with Lightning. To do that today the way they did it, that outpouring of emotion, that’s what you see from all those stories.”

Far from comfortable until the final whistle, Francis-Bayman added;

“I was so nervous that I only thought we’d done it with about three minutes to go. I couldn’t decide whether to put people on, I just lost the plot, we were falling apart on the bench!”

On her first major success since retiring from an international playing career to become Lightning’s Director of Netball, Francis-Bayman commented;

“When I started this role, I had no idea if I was capable of being successful at it and I’m so thankful for Liv Murphy and Vic Burgess who are next to me and also Karen Atkinson who mentored me through my first year. For them to believe in me and to help me and to be the rational people on the bench. This means so much to us and for me personally, but ultimately for the team.”

At no point did Lightning show signs of nerves, despite history going against them;

Loughborough Lightning would like to thank all its fans, partners, sponsors and supporters for all their hard work, dedication and support over the years.