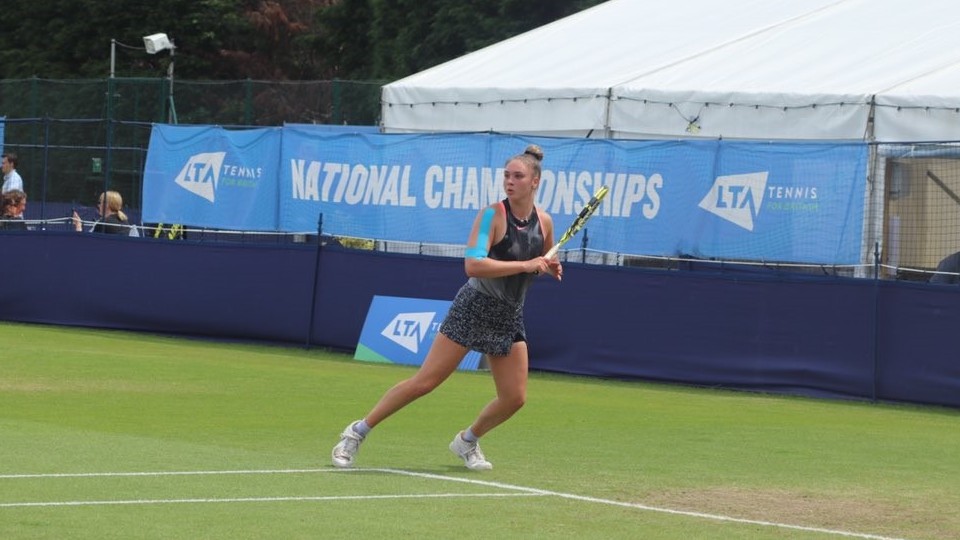 Eva Shaw's victory will see her compete in the Ladies Singles’ Qualifying stage at Wimbledon.

Loughborough University’s National Tennis Academy (LUNTA) enjoyed great success at the recent Youth National Championships, with four of its players securing the chance to perform at Wimbledon later this year.

The under-18s event, played on the grass courts of Surbiton Tennis Club, saw LUNTA pairing Kylie Bilchev and Eva Shaw battle it out in a tense three-hour final.

Bilchev’s gusty performance was also rewarded with a wildcard into the main draw of Junior Wimbledon, which begins w/c 5th July 2021.

In the Boys Singles, Hugo Coquelin completed a gruelling 6-3, 3-6, 6-3 victory over Fabio Nestola as Loughborough-linked athletes continued to dominate the Championships.

Hugo’s victory was all the more impressive as he was originally down as a qualifier for the competition and therefore had to win a mammoth seven matches to lift the title.

The victories also proved to be a double delight for Eva and Hugo as they both secured wildcard entries into the main draw of Junior Wimbledon later this year.

They will also be joined by Ranah Stoiber who achieved a wildcard entry in the qualifying stage as the runner-up in the Girls Singles.

There was more Loughborough success in the Doubles as Luca Pow and Henry Searle combined to take the Boys Championship title 6-4, 6-2. Loughborough’s Mimi Xu was part of the Girls Doubles winning team, brushing aside their opponents 6-1, 6-0 in one-sided final.

Recent results – and support from the LTA – has ensured that six Loughborough-based players will compete at the upcoming ITF junior tournament at Roehampton and Junior Wimbledon in back-to-back weeks at the end of this month.

These competitions are recognised as the most prestigious grass court tournaments at a junior level and will be entered by the world’s top 100 players.

Junior Wimbledon will present the first grand slam opportunity for any LUNTA player, and also presents a great chance to have Loughborough represented at the US Open which begins on the 30thof August 2021.