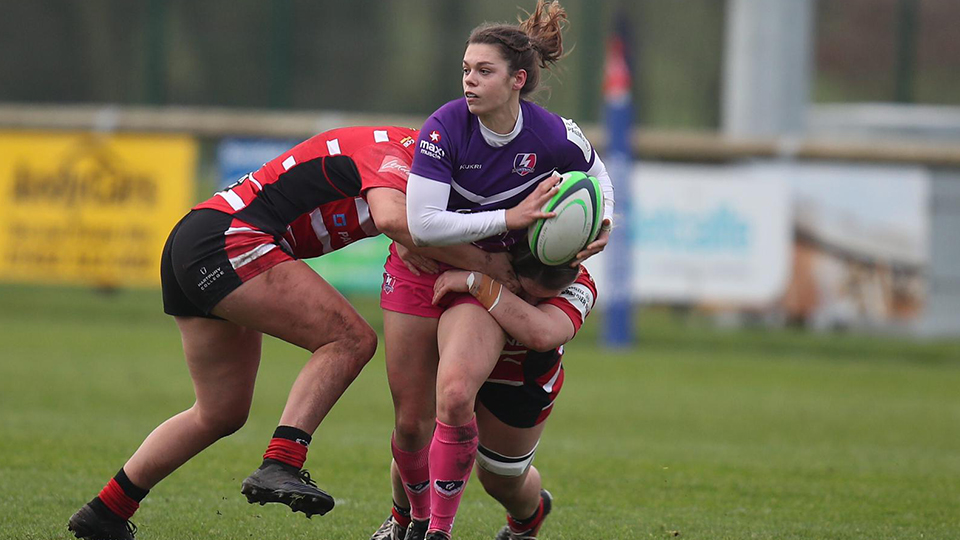 It was a tale of two halves for Lightning as they kick-started 2021 off with a bonus-point win over Gloucester-Hartpury.

With both sides needing a win to start 2021, it was Gloucester-Hartpury that struck first. Charging down Lightning’s clearance kick, the home side pounced on the loose ball, scoring within the first minute of the game.

Shocked into action, it was only minutes later that Lightning retaliated with a score of their own. A clinical line out saw Lark Davies drive the ball across the line from 5m, evening up the score as Emily Scarratt added the extras.

Seemingly plagued with errors in a normally formidable set-piece, Lightning found themselves having to defend hard as Gloucester-Hartpury challenged them at every opportunity.

In the 25th minute, the home side capitalised on a Lightning penalty at the lineout. A penalty try was given after Lightning brought down the maul before the line, giving Gloucester-Hartpury the lead, 14-7.

The half continued with Gloucester-Hartpury on the attack, however, a valiant defensive effort from Lightning put a halt to the home side extending their lead before the half time whistle.

It was a re-focused Lightning side that took to the pitch in the second half and within moments after the whistle blowing, they struck. A clean lineout saw the forward’s muscle their way across the line with Katie Trevarthen claiming the 5 points for her side.

Looking to have found their feet it was only 3 minutes later that Lightning crossed the try-line again, this time through the ever-dangerous Rhona Lloyd, taking the lead for the first time in the match.

With set-piece going their way in the second half, Lightning looked deadly as a pinpoint accurate kick from Helena Rowland allowed them to attack from 5m out. In an almost carbon copy of her first, Lark Davies collected her second try of the game and 11th of the season, as she crossed to extend Lightning’s lead.

Not satisfied with the four try’s Courtney Holtkamp demonstrated her brute strength as she powered her way across the try-line with three of the opposition hanging off her.

With seconds left on the clock, it was the home side that would have the final attacking flourish as some brilliant feet from the 8 saw her clean through the Lightning defence and near the whitewash. A last-ditch tackle from Abby Duguid managed to stop her just short, however, the offload could not be stopped, and Gloucester-Hartpury got their third try of the game.