Sara Bayman: “Whether it’s on court or off court, we have to keep improving” 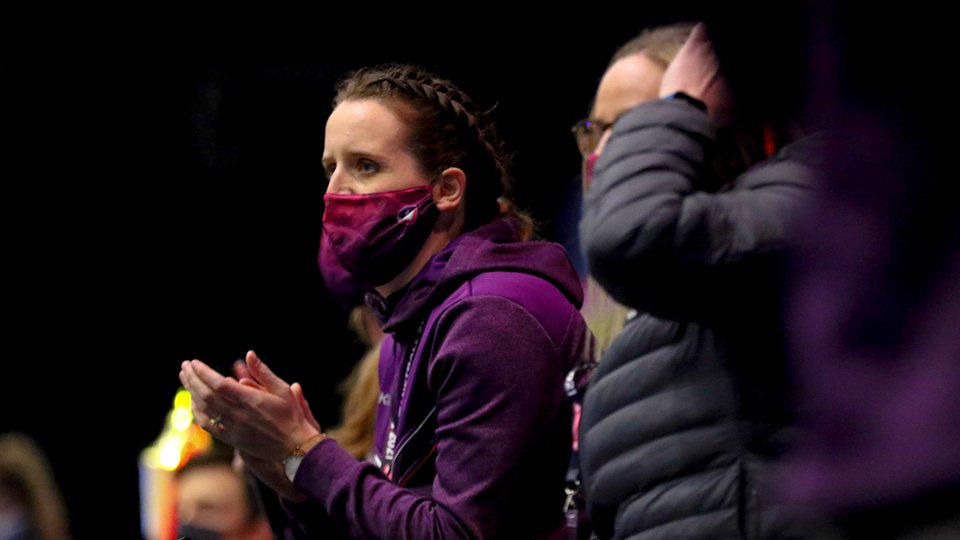 2021 sees Sara Bayman embarking on her third season as Director of Netball of Loughborough Lightning. The former Vitality Rose steered Lightning to the 2019 Vitality Netball Superleague (VNSL) semi-finals before her second year in charge was disrupted by the COVID-19 pandemic. Reflecting on her journey, it was another former England international who had Bayman considering the transition into a coaching role.

“I’d done my coaching awards during my playing time; I’d always done bits of coaching whilst I was a player,” she explains.

“And then the Loughborough job came up and Liv (Olivia) Murphy spoke to me about it and was like ‘I think you should have a look at it.’

“After talking to her for a while and seeing what Loughborough were doing and the support that they had around it, it was just too good of an opportunity to not kind of throw my hat in the ring.”

The senior position at one of the VNSL’s founding members is Bayman’s first major coaching role, which is testament to her character, knowledge and the respect with which she’s held within the game.

While she admits that the move from player to coach wasn’t without its challenges, it’s one she’s thrown herself into wholeheartedly.

The 36-year-old’s adaptation was aided by colleagues internally at Loughborough such as Karen Atkinson and Victoria Burgess but also externally as she benefitted from a “genuine support network” among coaches within the sport.

“In the middle of my first season, I was just like wow – a steep learning curve happened over quite a short period of time for me,” Bayman reveals.

“I probably spoke a lot to Tamsin Greenway that year just because her journey had been kind of similar in terms of just going straight from playing to coaching.

“She was a great help and she was obviously still at Wasps at the time but I think the nice feel about netball is that it’s not like coaches ringing up trying to find out gossip or how you’re going to play or things like that.

“And now I’m in year three - even though we didn’t really have a season last year - it’s starting to feel a bit more like home for me.”

One player who returned home to Lightning for the 2021 season is Beth Cobden and Bayman admits “it felt like she’d never left”.

Striking the balance between having some senior players with experience and having some youngsters who she’s excited to see develop was key for the Head Coach.

“You’ve got Sam May chatting away to an Alice Harvey who’s at the start of her career because they both want the same things and I think that’s the beauty of sport.”

Now in her third year with Lightning, who contested consecutive Grand Finals in 2017 and 2018, Bayman and the players are clear what would count as success for the club in 2021.

“I guess every team and every coach will say they want to make top four ultimately and that’s kind of an overarching aim but it’s not really something you talk about day to day,” she says.

“I think what we talked about at the beginning of the season is yes, we’ll have these aims and they’ll be there but success for us day to day is we get better in some way.

“Whether it’s on court, off court we have to keep improving because we’ve seen in previous seasons we’ve had slow starts and got better and better and I think for us it’s a necessity that at the end of the season, we’re better than we are at the start of the season.

“And whether you’re winning or losing games, it’s kind of irrelevant at that point but you’ve got to continue to improve.”

Lightning supporters will be able to keenly observe their team’s performances with every 2021 VNSL match broadcast live across Sky Sports Mix, Arena and YouTube.

Bayman urges the Netball Family to take advantage of this opportunity: “It’s massive and you know, now we’ve got what everyone was asking for we need to make sure that people tune in and make the most of it.

“Netball fans have been crying out for more coverage and now we’ve got it and I think it’s amazing and what we need is big, big numbers watching the games and getting behind the teams and showing support because that’s what we need to keep it out there and on this kind of level.”

Loughborough Lightning are back in action this weekend on Sunday 21st February where they face Saracens Mavericks in round three of the Vitality Netball Superleague. You can catch all the action live on Sky Sports Youtube from 1.45pm.