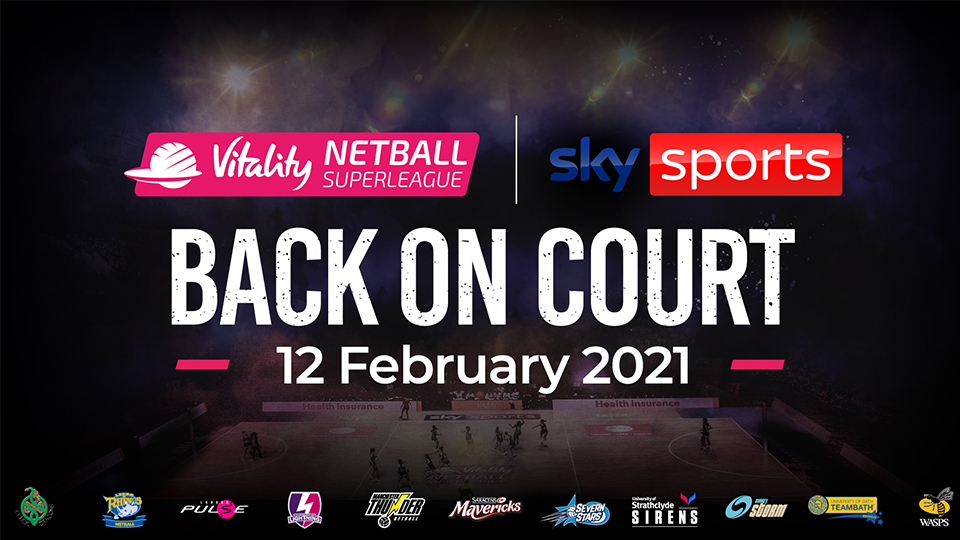 Loughborough Lightning fans will be able to witness every second of the 2021 campaign from the comfort of their home after the national governing body for netball in England announced a significant new multi-year broadcast deal with Sky Sports UK.

The partnership will see every match of the Vitality Netball Superleague 2021 season broadcast across Sky Sports channels (each game will be available for fans to watch live in some format across YouTube or Sky Sports Mix/ Arena), giving the competition its greatest exposure to date.

The Vitality Netball Superleague will be returning on 12 February 2021 featuring 11 teams, with the addition of newcomers Leeds Rhinos. The 2021 season, which is set to be the most competitive and exciting yet, will feature some big-name signings from across the world of netball, ready to showcase their skills on court and make their mark on the competition as the domestic game returns on home soil.

Due to the ongoing COVID-19 global pandemic the decision was made to host the Vitality Netball Superleague behind closed doors across two venues this season, to enable strict and consistent COVID-19 protocols to be in place for all games, supported by an extensive season-long testing programme across the league. The season will get underway at Studio 001 in Wakefield for the first nine weeks and move to the Copper Box Arena in London for the remaining fixtures.

Lightning Head Coach Sara Bayman, commented on the huge development for netball with the increased coverage of the league:

"We’re going to miss our home support so much this season and we’ve constantly felt the impact of our fans throughout lockdown so we’re thrilled that they’ll be able to follow the team throughout and support us from the safety of their homes."

The fixtures for the highly anticipated Vitality Netball Superleague 2021 season have now been confirmed and can be viewed here.

As part of the groundbreaking partnership, every match of the 2021 season will be covered by Sky Sports through a combination of live TV and streaming coverage as well as highlights, ensuring fans don’t miss a game whilst helping to drive new audiences for the sport, building on the momentum around audience growth seen in recent years.

Fran Connolly, CEO of England Netball, said: “It is such a pleasure to be able to announce this new deal with Sky Sports. Over recent years they have been able to capture huge moments in our sport and bring fans closer than ever to netball.

“We were delighted to bring elite netball back to the court during our recent Vitality Netball Legends Series, that saw the Vitality Roses play an international All Stars side, made up of talent from the Vitality Netball Superleague, and we cannot wait to continue that momentum and give our Netball Family something to look forward to.

“This partnership is a huge milestone for netball in this country and underlines the continued interest in our sport. The increased visibility this will bring will shine a light on the incredible role models in our game and help to inspire a nation of women and girls to take to the court.

“I am very much looking forward to our ongoing relationship with Sky Sports and hope to see more netball history made together in the coming years.”

“As part of our partnership, Sky will broadcast more Vitality Netball Superleague games in 2021 than ever before, covering all 114 matches across the season in some format, helping to drive exposure of the league and directly benefiting our clubs and the wider netball community. Despite the league being played behind closed doors, the Sky partnership will enable us to not only increase visibility but also engage with new audiences – something we are all very excited about.

“Their coverage of the league is vital for the return of women’s sport in 2021 and the visibility of netball and marks a very important and groundbreaking moment for our game.”

Rob Webster, Sky Sports Managing Director, said: “Sky Sports has been a long-term partner of netball since 2006. We are delighted to be expanding upon our existing deal to bring the thrill of the game to our audiences for years to come. Popularity for the sport has increased in recent years as viewing figures saw 550k people tune in to watch England’s Vitality Roses in 2019’s thrilling Netball World Cup semi-final. At Sky Sports our goal is always to be the best partner to sport and we hope by working together we can help Netball continue to grow in future.”

View all of Lightning’s 2021 fixtures here.

Please note: All current Lightning ticket holders that chose to roll over to 2021 will be contacted shortly to discuss your options.