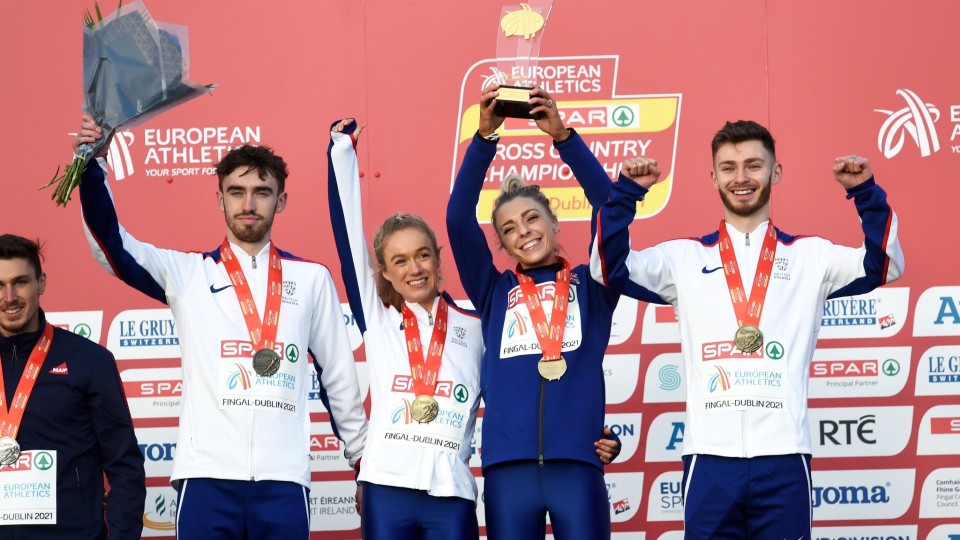 In an event where GB&NI typically perform very well - and continued their tradition of topping the medal table - there were plenty of strong performances for Loughborough athletes to celebrate.

One of the highlights of the day was the short course mixed relay event, which saw two current students and one recent alumni take the gold medal. Former MSc student Hannah Nuttall put the team in a strong position and handed over to current student Luke Duffy in 6th place. Duffy maintained the position and handed over to Olympian Alex Bell who had a phenomenal run to take the team into 1st place. When Bell handed over to scholar Ben West with a 4-second lead, it was just up to West to maintain the lead, which he managed to do even with a fast finishing French team chasing him down.

West took to social media after the event to announce, “EUROPEAN CHAMPIONS!! Over the moon to take the win in the mixed relay alongside Hannah, Luke and Alex. Senior debut went to plan – what a way to cap off 2021”

There was further team success for the Women’s Senior Team with scholars and PhD students Jessica Judd and Abbie Donnelly finishing a highly respectable 4th and 12th to contribute strongly to the women’s team gold.

Finally, recent graduate Cari Hughes will also come back to Loughborough with some precious metal as her own 16th place finish helped the U23 women’s team return with a bronze medal.

Newly appointed Loughborough’s Head of Endurance Kyle Bennett, who is also personal coach to gold medallist Ben West, was clearly pleased with the results from the weekend:

“There were some excellent results from Loughborough athletes in Dublin, which is always exciting as you come into a new programme. We’re in a great position heading into BUCS Cross Country which takes place in about 6 weeks, as well as being set up for a very busy 2022 where we have the Commonwealth Games, European Championships and World Championships taking place. Lots to look forward to.”