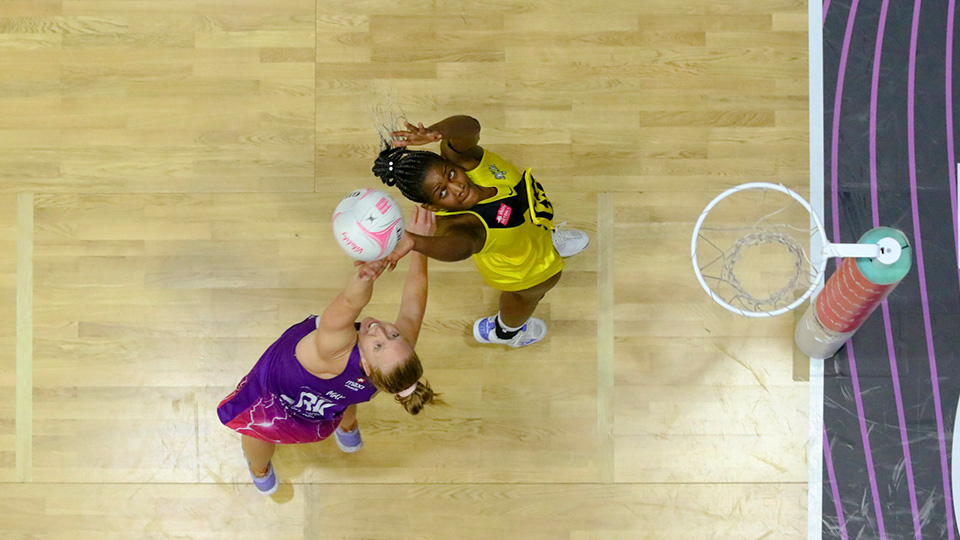 Loughborough Lightning were back in action for the opening match of Easter Sunday, facing reigning champions Manchester Thunder in round nine of the Vitality Netball Superleague.

Ending their seven-match winning streak, Loughborough Lightning fell short on Sunday afternoon after an intense battle against the 2019 champions who claimed a 50-59 victory over the Lightning side.

After a shaky start in last weekend’s clash against Strathclyde Sirens, Lightning came out with a newfound confidence, maintaining their strong start throughout the quarter, keeping it goal for goal. With both sides eager to gain the opening advantage, Lightning looked to force the pass quickly into Cholhok whilst Harvey increased the pressure on Malawi International shooter Joyce Mvula. With just five minutes left in the quarter, Lightning kept their cool to increase their lead by two.

With just one point separating the sides in the second quarter, the pressure was quickly increased, which in turn caused the turnover rate to rise. Quickly realising their favoured long bomb to Cholhok was being chased down by Thunder, Lightning began to opt for short sharp play with Liverseidge rotating the circle edge, supported by Panagarry and Joseph.  Despite both Liverseidge and Cholhok claiming a 100% shot success rate throughout the entirety of the second quarter, Thunder went into the half-time break ahead by five.

Making changes to her side, Head Coach Sara Bayman switched up the shooting circle, opting for long bomb queen and dual-athlete Ella Clark to join the fight and bring a level of calm to the clash. Meanwhile in defence, Loughborough University student, Jas Odeogberin joined the mix in goal defence with stalwart Sam May moving to goalkeeper in place of Alice Harvey. Treating fans to her famous lay-up style shot, Cholhok claimed her 300th goal of the season, the first shooter to reach the milestone so far. Struggling to push the ball out of defence, Lightning used each and every advantage to close the gap and win the third quarter, trailing by just one.

Fighting tooth and nail for every single ball, Thunder refused to lie down, extending their one goal lead to five within the opening five minutes. Matching the increased tempo, Captain Nat Panagarry continued to wreak havoc on Thunder’s incoming ball, tipping it on the circle edge before righting herself to remain in the game and continue to hassle.

With just four minutes remaining, young England U21 midcourter, Hannah Williams entered the mix, adding a fresh set of eyes and legs to the ongoing battle. Immediately tipping the ball and teaming up with Odeogberin to capitalise on a Thunder error, they quickly sent the ball down to Cholhok in an attempt to shorten Thunder’s lead. However, Thunders sheer determination and work rate saw out the final moments of the match, earning them a well fought victory and ending Lightning’s seven match winning streak.

“That result has been coming for a couple of weeks, we’ve not performed particularly well and if you go from six or seven goals up to five down in the space of six minutes then you probably don’t deserve to win.”

“We were poor, the second and fourth quarter in particular, we were really bad, and we had enough chances to win that game and put it to bed by half time and if you’re not going to do that against a team like Thunder then you’re going to pay.”

“Today was frustrating because it was a lot of individual errors and if you’re not willing to do the work against Thunder then they’re going to be all over you and the pressure told in the end.”

Sara also commented on the changes made during the match:

“We’ve definitely got options, Jas came on and did really well and it was nice to see Ella back out there, and that’s a positive we can take from this, but we’ll go away, we need to be better and I’m actually of the mind-set that a loss is a good kick up the backside for us at this point in the season.”

Lightning are back in action next week for another double header weekend. Facing Strathclyde Sirens on Friday 9th April followed quickly by Celtic Dragons on Saturday 10th April, Bayman’s side will be looking to bounce back from this disappointing result.

You can witness all the action LIVE on Sky Sports YouTube channel.