Sarah Bryce scores 136* as Lightning finish on a high in the Rachael Heyhoe Flint Trophy. 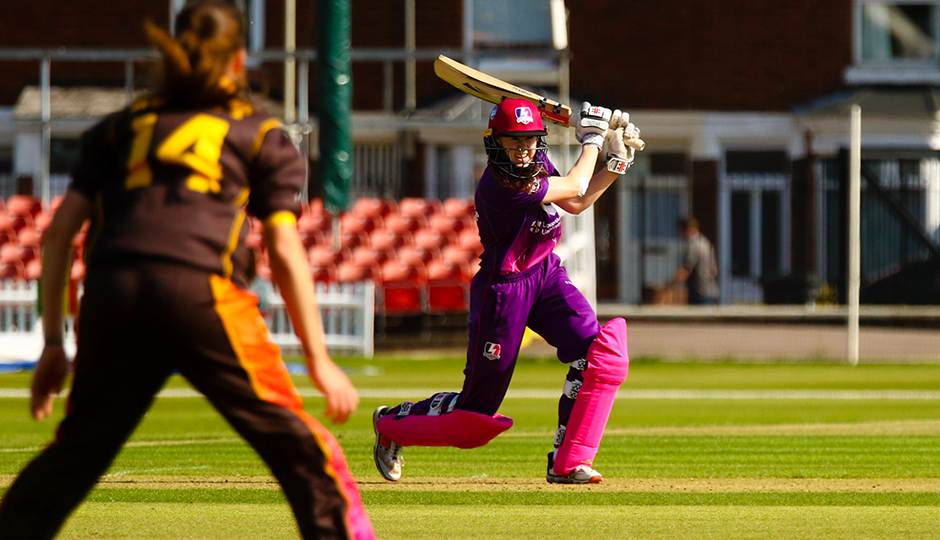 Lightning finish the Rachael Heyhoe flint trophy on a high as they clinch the win against Central Sparks at Grace road. A score of 136* from Sarah Bryce lead the team to a tournament all time high score of 303 and to a final victory of the 2020 season.

Finding themselves in to batt first S.Bryce and Ellis opened up for Lightning powering their way to a 50 partnership after only 12 overs.

After edging the ball to slip, Ellis made her way off the pitch to be replaced by K.Bryce. The sisters found their stride quickly running hard between the stumps before K.Bryce was trapped lbw for 14.

A dangerous looking Freeborn took up the scoring mantle for Lightning next and some fantastic running between the wickets and punishing boundary shots saw the pair crank up the pressure on the Sparks bowlers.

Having been striking the ball sweetly all game S.Bryce brought up her 50 with ease, her partner Freeborn seemingly inspired, followed suit racking up 40 runs in 15 overs before being caught in the 30th over.

It was a short stint at the crease for Higham who was followed by Graves. Settling in quickly, Graves and S.Bryce seemed untouchable in the middle. Finding the boundary at every opportunity the pair rocketed Lighting’s score skywards scoring a partnership of 127. Making it look easy, S.Bryce cruised to her first centenary of the season after 44 overs, edging the Lightning score ever closer to the 300 run mark.

A final flourish from Graves saw her score 50, she then moved up another gear,hitting a huge six back over the head of Izzy Wong. With only a few balls left some brave running from Graves saw her run out and Harman joined S.Bryce at the crease to see out the game.

Taking the strike for the final few balls, S.Bryce added insult to injury as she sent the ball flying to the boundary, scoring 136* and posting a record score of 303-5 for Lightning.

Not going down without a fight, Jones and Davies started strong for the away side, swiftly scoring a partnership of 104 in 17 overs.

Needing to strike, Lightning handed the ball to Gordon. The England spinner did not disappoint, dismissing Davies for 48 and getting her side back in the driving seat.

Taking control of the game Lightning slowed the Sparks run rate down, applying the pressure with slick fielding.

A magnificent 34th over from Higham saw the dismissal of Kelly as she lofted the ball in the air towards Graves. The following ball Higham struck again bowling Arlott for a duck then pinning Davies in the wicket only allowing them to take 1 run from the over.

The wickets kept coming as Gordon took her second of the game trapping P.Daives lbw for 6 as Sparks struggled to score runs at the back end of the innings. With 8 overs to go K.Bryce came back into the Lightning attack and almost instantly removed Hill from the crease, leaving Sparks floundering.

Tearing through the away team’s tail end order, both Ellis and K.Bryce bowled with ferocity as they dismissed Boycott, Russell, Wong and Baker in quick succession.

With ball in hand for the final over K.Bryce kept her cool, as she caught and bowled Patel for 1, leading her side to victory in their final game of the Rachel HeyHoe Flint Trophy.