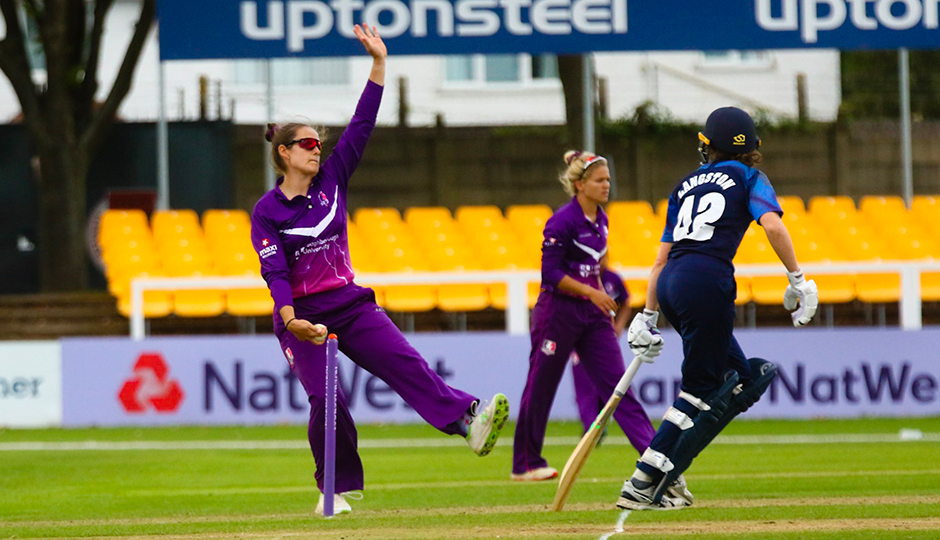 Loughborough University engineering student Nancy Harman has featured in all three of Lightning’s Rachael Heyhoe Flint matches thus far and will be hoping to make her mark against Central Sparks on Friday and take vengeance against Thunder in Sunday’s return fixture.

Harman’s entry into cricket took a natural course, first getting involved with an after-school club as a youngster before joining her local club. From there she represented her native Sussex before making the move to study at Loughborough University where she enters her fourth year of study.

“I’m doing a masters in material engineering. I enjoy it and have just finished my dissertation this year and now go into my final year of the integrated masters. I really enjoy the course and I feel so lucky to go to Loughborough University where I am able to balance both the course and my cricket.

I’ve been in the MCCU programme at Loughborough University for three years, so I’ve put in a lot of hard work there.”

Harman’s 2019 was a stellar year for the student, picking up 23 wickets with the ball, including an opening performance of 6/40 for Sussex. This impressive form was backed up with a best bowling performance of 1/7 and a batting average of 88.0 across four Sussex matches prior to her Lightning selection in this Covid-19 affected 2020 season.

“I've missed out on a couple of seasons because of injury and then the 2019 season was the first season where I really got to break into the playing eleven. I took six wickets in the first game which I think set me up for a good season and then I had a few other good performances with the ball last year especially in the County Championship. So yeah, it was really good to finally come good for Sussex after their commitment to me as a younger player through the years.”

Making the step up from county representation to regional, is something Harman had been longing for;

“I was really proud of myself because I was always working towards getting a contract with the Lightning Super League team and obviously although that doesn’t exist anymore it still feels really good to represent Lightning Cricket now and the East Midlands region here.

I feel really do feel honoured to be part of the squad and I’m really excited for the rest of the season and seasons going forwards with the East Midlands.”

Despite, Lightning still needing to put points on the board, there have been many standout performances from their Rachael Heyhoe Flint Trophy campaign. Facing Thunder in the opening fixture, Lightning fell just four runs shy of a perfect start. Harman batting towards the tail order contributed a quick blast of 11 runs before being bowled by Sophie Ecclestone.

“I think there was a bit of nerves in the first game, myself included. It felt like it was the coming together of quite a few weeks of training and then years of working up to the point of playing at this next level.

But I think there was some really excellent individual performances, obviously Sarah Bryce hit her first 50 and I think we were in a really good position to win the game all the way through until the rain came and when we went back out I think the run chase was just a little bit too much for us.

It was good to be able to get the team as close as we did especially in the lower order, but it just wasn’t to be and when you’ve got the world’s number one T20 bowler bowling at you in those final overs it makes it particularly difficult so credit to them.”

In the second fixture against Diamonds, it was the difference of nine runs as Lightning fell on the wrong side of the small margins. In the return fixture, Harman (21) played a crucial middle order role supporting Teresa Graves (37) to rebuild a slight collapse in Lightning’s momentum.

“I think individual performances aside it was really disappointing not getting over the line in that game. I think again we put ourselves in a position to win the game. I got in, we had a good platform batting-wise and I felt good with that partnership with Teresa to be able to rebuild from 140-5 to 200-6 I think that was definitely a good thing for us both to have done and it got us in a position to score 226 as we did.

Then I think with the ball I think in general there’s just things to work on but definitely we’re just growing every day and in every game as a team. Fingers crossed it’ll be two from two this weekend with all the things we’ve learnt from those first three games.

Looking ahead to Central Sparks on Friday and Sunday’s clash with Thunder, Harman said; “It’ll be a good challenge with new faces to play. There’s a lot of players that we already know and some of the players within the team would’ve played with some of the girls before, so there will be some ex-team mates, so it’ll definitely be good to see a bit of rivalry but I don’t think it’ll be any different to the rivalry that we have with any other teams really, we always want to win regardless of the opposition.

But yeah, I’m just really excited. We’ve fallen on the wrong side of the last three games for a number of different reasons and we have definitely put in the hard work and deserve to get a win.

As a team we’ve said if we can each improve a couple of things then across the eleven of us that should be a big improvement as a team.”