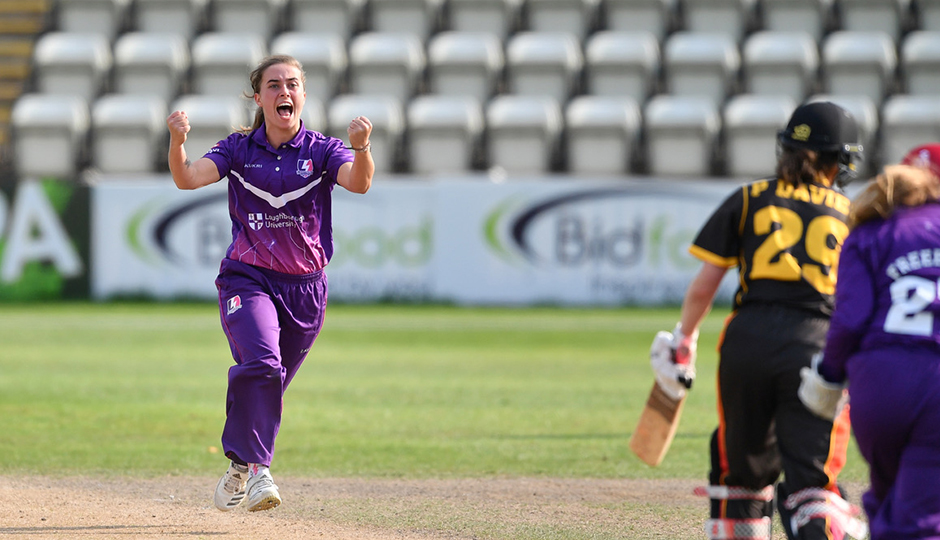 Lightning Strikes for the first time in the Rachael Heyhoe Flint trophy! A three wicket haul from Presland and a 4th 50 run score this tournament from Sarah Bryce, helps their side take a 6 run win over Central Sparks.

Lightning took to the pitch with fire in their belly’s as they looked to get their first win of the season under their belt at New Road. Looking to set a solid platform for their side, Ellis and S.Bryce took to crease to open the batting for Lightning. It was a steady start for both batters, and they looked to build in confidence as the overs passed, reaching a 50 partnership in the 16th over.

Some fantastic running between the wickets and punishing boundary shots saw the pair in the middle crank up the pressure on the Sparks bowlers. As is now expected, S.Bryce found her stride and cruised to her 50 runs, swiftly followed by partner Ellis, bringing up the pairs 100 partnership with only 26 overs gone.

The Lightning momentum was slowed however as a lofty ball from Sparks caught S.Bryce off guard, ending the pairs swift scoring partnership after 32 overs. Wickets continued to fall for Lightning as Ellis left the field lbw after a fantastic innings scoring 61, followed by K.Bryce who was caught in the deep for 10.

A dangerous looking Freeborn took up the scoring mantle for Lightning next, striking the ball sweetly and sending it soaring over the boundary for the games first 6. The elation was short lived however as the next ball saw Graves dismissed for 1.

Playing her part in the Lightning total, Higham’s innings was short but sweet, racking up a quick scoring 15 before a sky high ball sent her back to the club house.

With 3 overs remaining Lighting’s wickets kept tumbling as Harman then Freeborn where removed, leaving Pai and Kellogg to see out the innings and post up a score of 233 for Sparks to chase down.

After the break Lightning took to the field with fire in their belly’s. Bryce and Munro opened the bowling attack firing balls at the Sparks batters with ferocity.

Joining the attack in the 6th over Kellogg was the first to strike, smashing the bails off the wicket and seeing the back of Sparks captain Jones for a mere 10 runs.

Finding their rhythm through Davies and Kelly Sparks notched up quick runs to take them over the 100 mark in the 18th over. It was not until the 23rd over that Presland dislodged Davies from the crease, hitting her plum on the pads and given a lbw.

With Lightning building pressure on the batsman Graves was handed the ball. Looking dangerous from the start it wasn’t long until she sent Kelly back to the club house after smashing the stumps to pieces, claiming her first wicket of the tournament.

Not happy with just the singular wicket, Presland continued to smash her way through the Sparks batting line up, dismissing both P.Davies and Home in rapid succession.

Trying to pick up the run rate for Sparks, Hill smashed the ball towards the boundary rope looking for 6, however S.Bryce had other ideas, plucking it out the air giving Graves her second wicket of the game.

With 5 overs to go Lightning’s tight fielding proves too much for Arlott who sent the ball straight into the hands of Sims. Consistent pressure from Lightning saw allrounder Boycott tighten up at the crease, restricting Sparks run rate.

Taking the ball for the final time K.Bryce got in on the wicket action taking 2 in the 48th over, including some exceptional fielding from Higham.

Ellis kept her cool as her final over left sparks 6 runs short and cemented her sides first victory in the Rachael HeyHoe Flint Trophy. Lightning will now hope to take that positive winning momentum forward to their second game of the weekend in Liverpool where they take on Thunder.