Hartley star of the show as Lightning crumble in Liverpool 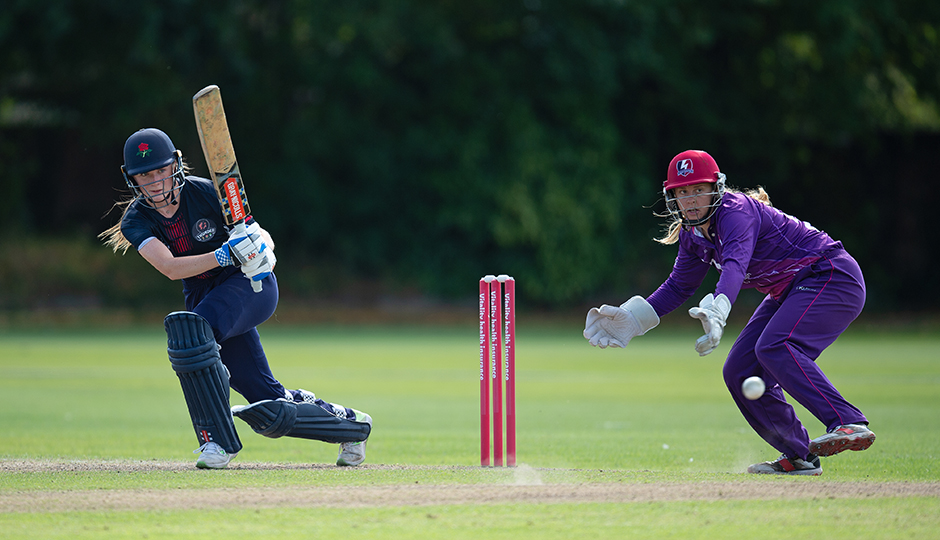 After Friday’s win, Lightning had great expectations as they headed to Liverpool to take on Thunder for the second time this season. Thunder’s captain Hartley had other ideas however, thundering her way through the Lightning batting line-up she took 4 wickets and crushed any hope of Lightning win, with her side bowling the side out for 116 in the 39th over.

Fuelled by Friday’s win against Central Stars Lightning started their final away game of the Rachael HeyHoe Flint Trophy in a positive manner. Two early wickets from captain K.Bryce set the president for the rest of the squad, dismissing Thunder opener Marshall for 11 followed by Jackson for 0.

Being handed the ball after her brilliant wicket taking performance on Friday, Presland took no time in striking, taking the crucial wicket of Threlkled for 4 before she was able to settle in at the crease.

Tight fielding from Lightning proved too much for Thunders opening batter Boyce, who was run out by Higham after some indecision in the middle. It wasn’t long until Higham struck again, this time trapping Collins lbw and adding to the pressure to the home side.

Settling in at the crease both Brown and Duckworth started to build a partnership. Surpassing the 50 partnership mark, both batters seemed confident at the crease until confusion between the two hit and Lightning capitalised, running Brown out for 52.

In the final 3 overs, the wickets started to tumble for Thunder.  Ellis claimed her first wicket of the innings as the ball found its way straight to Pai, removing Dyson for 4. K.Bryce picked up her 3rd of the day sending the bails flying  and removing Heap, swiftly followed by her 4th after some brilliant team work with Freeborn saw the back of Duckworth for 27.

Hartley and Jones weathered the final few balls from Lightning as Thunder posted a score of 188* for Lightning to chase after Lunch.

Aware of the threat that a S.Bryce and Ellis partnership could hold, Thunder struck early, removing Ellis from the middle lbw in the 3rd over of the innings.

Starting to build a partnership, the Bryce sisters scored 42 before S.Bryce was caught unawares, finding her bails gone and having to return to the changing rooms. It was only 2 balls later that K.Bryce followed her sister off the pitch after some quick hands behind the stumps from Threkled.

The wickets kept falling for Lightning as Higham fell to the speedy hands of Threkled for no score, followed by Graves who picked out the fielder as she tried to loft the ball to the boundary. Harman’s brief stint at the crease could only deliver 4 runs for her side before she was caught and bowled by Hartley who claimed her 3rd wicket of the day.

Making it her mission to demolish the Lightning side, Hartley trapped Pai lbw leaving Lightning in desperate need of a partnership with 20 overs to go.

With the Lightning hopes on her shoulders, Freeborn chipped away at the score line, first with Munro then Presland and finally Sims, however it was too little too late.

Misjudging the sweep shot, Freeborn was bowled in the 39th over by Jones, leaving Lightning all out for 116.