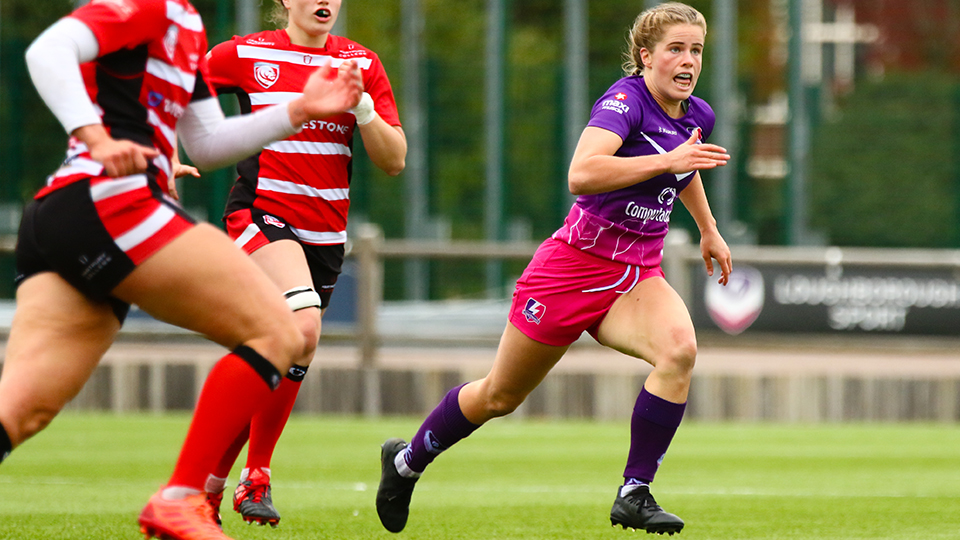 Lightning storm to victory over Gloucester-Hartpury 32-26, collecting the bonus point as they win their first home game of the 20/21 season.

Both teams looked sharp with the boot from the start, testing each other’s backline, and challenging the defence. It was Lightning however that got the upper hand first after a quick tap and go penalty was taken in the 22m gaining Lightning the momentum and allowing Ella Wyrwas to snipe through the ruck and score in the corner.

Retaliating quickly, Gloucester-Hartpury found space out wide beating the defence an taking the score to all square 7-7.

With big carries and hard hitting from both sides play continued to too and frow until in the 25th minute when a brilliant chip from Helena Rowland was collected and offloaded to Ella Wyrwas.  Catching the away team off guard Ella Wyrwas skipped her way through the final few defenders sprinting half the pitch, scoring in the corner to put Lightning ahead again as they headed into half time, 12-7.

After half time Gloucester-Hartpury looked dangerous and it did not take long for them to find the try line taking the lead for the first time in the game.

Regaining the lead through a kick from the tee, Lightning stepped up a gear and extended their lead through the forwards, with Lark Davies powering over the line from a line out.

With her boot on fine form, Helena Rowland added three more points to the Lightning total from the tee to giving her team a 25-14 lead.

Not going down without a fight, Gloucester-Hartpury struck back moments later, moving the ball wide and beating the Lightning defence to close the score to within one, 25-19.

Play continued to bounce between the teams, but a slick off load from Kat Hobson, set danger women Daleaka Menin free as she stormed through the Gloucester Hartpury defence scoring between the posts.

With only seconds to spare, it was away side that had the final score, bursting over the try line to claim 7 point, however it was too little too late as Lightning ending the game the victors, 32-26.