Lightning power their way to a first win of the season 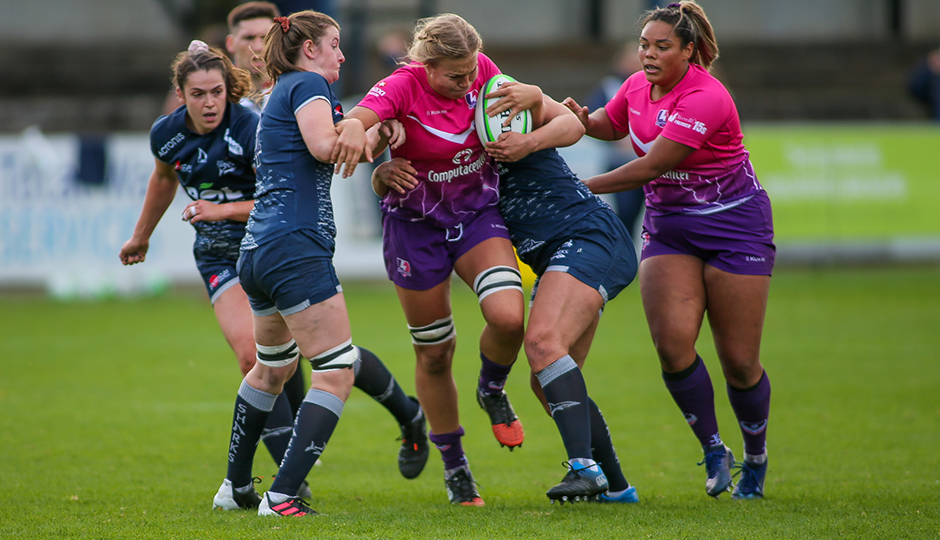 Sale looked sharp early on through the boot of Katy Daly-Mclean putting repeated pressure on the Lightning defence. Despite this, it was Lightning who got the first points on the board 12 minutes in, with the dancing feet of Helena Rowland setting Olivia Jones up in the corner before adding the extras herself.

Retaliating quickly, sharks found space out wide through a storming run from Lisa Neumann taking the score to all square 7-7.

Looking threatening with ball in hand the Lightning forwards clattered into the sale defence, and after a couple of dominant carries from Morwenna Talling and Rachel Malcolm, Lightning’s debutant Rowland broke the line, winning a penalty and securing the lead for the away team at half time.

It was Sale that came out of the changing rooms firing on all cylinders, looking aggressive in both attack and defence, working their way down the pitch towards their tryline. The home side however could not convert their pressure into points.

With 10 minutes left on the clock Lightning looked to find a new gear in their attack. With set piece a strong point of the Lightning game it was not long until deep into the Sale half Lark Davies crossed the line from a maul.

Fuelled by the score Lightning looked dangerous with ball in hand, with backs Helen Nelson and Helena Rowland carving up the Sale defence giving Lightning forwards momentum in attack.

With minutes on the clock another driving maul from a lineout surged across the white wah giving Lark Davies her second of the game. Collecting the kick-off Lightning pressed on, giving the ball to the forwards and with only seconds to spare Anya Richmond crossed the try-line, clinching the away win for Lightning 29-7.