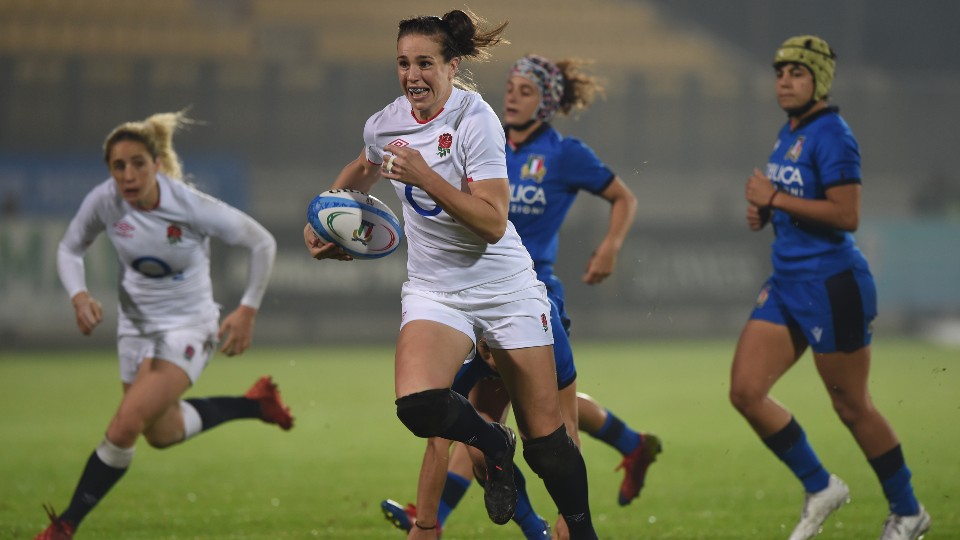 Loughborough Lightning’s Emily Scarratt has been unveiled as the inaugural Women’s Six Nations Player of the Championship.

Scarratt, who became England’s highest ever Red Roses points scorer during this year’s Women’s Six Nations, was crowned the first winner of this award after receiving the most votes from the Head Coach and Team Captain of each participating Women’s Six Nations team.

Commenting on the award, Scarratt said:

“It’s a huge honour and a huge shock to win this award. Thinking back to those first four games seems like a lifetime ago and there are some great memories from the tournament. France away was a huge game and leading the team out against Wales and Italy was a massively special moment too.

“I love the Six Nations, I grew up watching it and it has a special place in my heart.”

The 30-year-old's try from close to the half-way line against France was vital as England got their campaign off to a winning start, sealing victory against the Red Roses’ fiercest Women’s Six Nations rivals. She rounded out the campaign with a similarly impressive score against Italy as England won their fifth game to become back-to-back Grand Slam Champions.

Scarratt played the most minutes out of any player in the Championship, starting every match and only being subbed off late in the second half in England’s final match win against Italy to secure the Women’s Six Nations Grand Slam.

“I would like to congratulate Emily on winning the first-ever Women’s Six Nations Player of the Championship award.

“She is an amazing player who beat tough competition to win this accolade. Well done Emily!”

Scarratt is one of the highest regarded England players of the last decade, helping secure England’s 2014 Women’s World Cup triumph with six minutes left in the Final and was top point-scorer in the tournament.

She also captained the Team GB Sevens team at the Rio Olympics, won a bronze medal at the 2018 Commonwealth Games and represented England at the 2018 Rugby World Cup Sevens. Scarratt was also named World Rugby Women’s Player of the Year in November 2019.