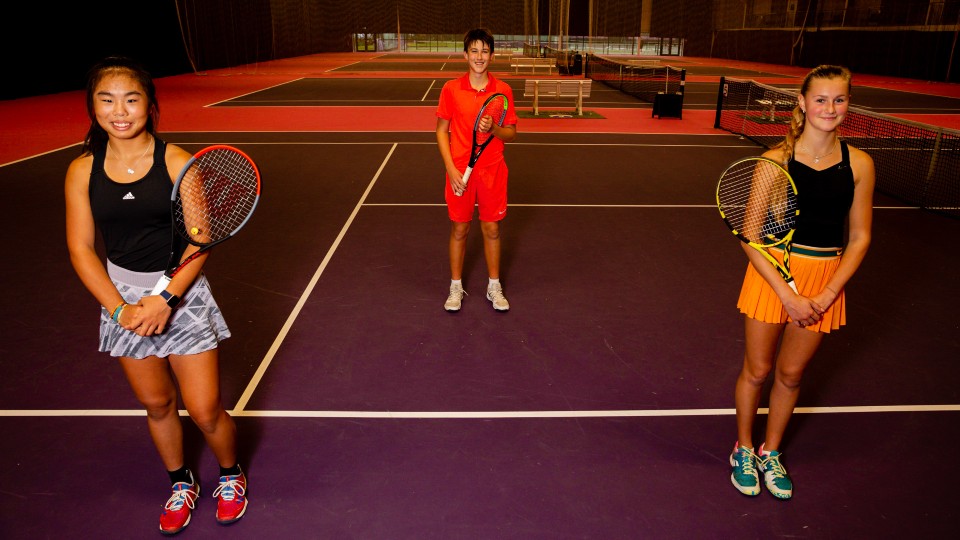 The latest cohort of top tennis talent from Loughborough University’s National Tennis Academy have settled into life on campus.

Promising young players Talia Neilson-Gatenby, Oliver Bonding, and Mimi Xu all arrived in Loughborough ahead of the new academy year.

Leicestershire-based Neilson-Gatenby, who currently competes in the U-15s category, arrived from Dollar Academy, Stirling (University of Stirling National Tennis Academy). Talia enjoyed a fruitful 2019 by winning the Grade 5 International Tennis Federation (ITF) title in Edinburgh and was also the Regional U-14s Road to Wimbledon Finals champion in the same year.

Oliver Bonding, who competes in the U-14s category, arrived from Kings College School, Wimbledon, and has enjoyed recent success in the Tennis Europe Boys event in San Marino, winning both the doubles and singles titles. He has also tasted victory in the Scottish Junior Open Championships (U-12s) in the same events.

Mimi Xu arrived from Olchfa School, Swansea, and also competes in the U-14 category. Xu was champion in the U-14s Tennis Europe Category in January 2020 and tasted success in the U-16s National Tennis Centre Invitational Winter National Finals in March of 2020.

“We extend a huge welcome to Oliver, Talia and Mimi to the National Tennis Academy. All three players have shown great commitment, skill and a real talent for tennis and we are happy that they have settled here in Loughborough.

“2019 was a great year and with the additions of more talented players and we look forward to continuing to go from strength-to-strength, helping produce great players in a world-class environment.”

As part of the on-going partnership with Loughborough Amherst School, the new players are receiving the highest standard of education and pastoral care that complements the students’ training schedule.