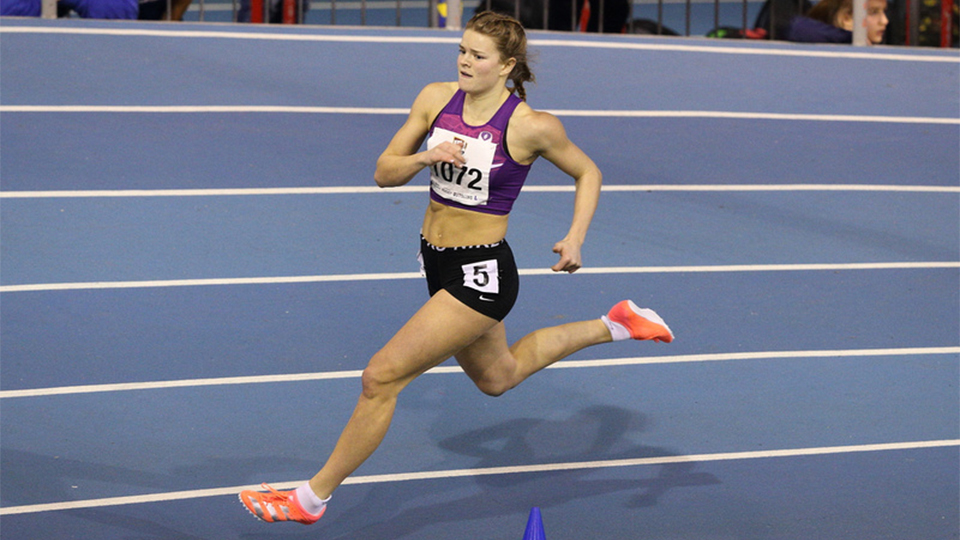 The cancellation of the World Indoor Championships (for which this would have been the trials), alongside the change in location from its usual Birmingham or Sheffield venue, meant that this year’s British Indoor Championships were an undeniably quieter affair than in previous years. However, it didn’t deter all athletes and the Championships saw 23 current students, 16 alumni and 16 Loughborough-based athletes make the flight, train or drive up to the Emirates Arena in Glasgow.

Highlights included the women’s 60m where Alisha Rees and Ebony Carr replicated their silver and bronze from Indoor BUCS, and were beaten by the young superstar of the sport, Amy Hunt. The U18 200m world record holder currently trains in Loughborough and is coached by Loughborough Head Para-Sprints Coach Joe McDonnell.

Further highlights included Amy Griffiths finishing 4th in a tactical 3000m, with her training partners and Loughborough based athletes Melissa Courtney-Bryant and Rosie Clarke taking the gold and bronze medals respectively. Loughborough alumna Jessie Knight was the overwhelming favourite to win the women’s 400m, which she did in style, taking the victory by almost a second and a half in the longer sprint. She was joined in the final by first year student and recent BUCS indoor silver medallist Zoe Pollock, as well as fellow alumna Jess Tappin.

Not to be outshone by the Loughborough women, the highlight for the Loughborough men was the men’s 60mH, which saw eight students and alumni contest the rounds. From there, three Loughborough athletes were only denied the clean sweep by gold medallist David King. Cameron Fillery, Ethan Ekanni and alumni Miguel Perera finished 2nd, 3rd and 4th in the final.

Loughborough presence was well and truly felt throughout the weekend, with staff and athletes alike sporting the African Violet either on the track or in warm up. Thanks to Harvey and Kelly for giving up yet another weekend to support the athletes with therapy and helping to make a true team environment. It certainly made everyone present sit up and take notice that Loughborough were in the building!

A handful of Loughborough students returned to the venue of the BUCS Nationals, coming away with three national U20 medals between them. Kalechi Aguocha cleared the 2.17m bar that had eluded him at the previous weekend’s BUCS competition, jumping his second highest height and another World Junior Championships qualifying mark.

First year Simon Coppard won a gold of his own, winning the 800m by just 0.07s in 1:54.70. George Hyde was the other Loughborough medallist, coming away with the bronze in the shot with a throw of 15.87m. Other Loughborough athletes competing included Carmen Neat jumping 1.71m for 4th in the women’s high jump, and Glen Quayle, who unfortunately failed to clear a height in the men’s pole vault.