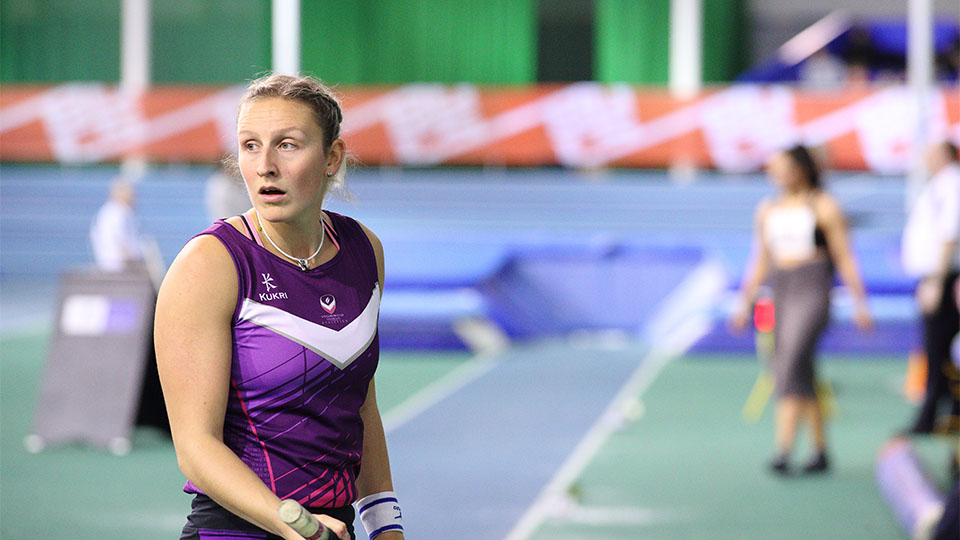 Day 3 of the BUCS Indoor Athletics Championships was a showcase for Loughborough talent, with a constant flow of medals, PBs and superb performances throughout the Sheffield EIS arena.

With Olympian and multi-International medallist Holly Bradshaw (coach: Scott Simpson) competing for Loughborough in the women’s pole vault, the gold medal was never in doubt, it was just a question of how high she would go. Breaking the Championship Best (previously held by training partner Sally Simpson) on her opening height, the crowd clapped Holly onto a season’s best 4.65m vault.

After fellow Loughborough high jumper Will Grimsey was forced to withdraw in the qualifying rounds with a knee injury, Kalechi Aguocha (coach: Fuzz Caan) was the overwhelming favourite to win gold in the men’s event. Although the anticipated head to head between Will and Kalechi wasn’t to take place, Kalechi still put on a great show, jumping 2.14m for the win. Loughborough’s Carmen Neat (coach: Fuzz Caan) and Ashleigh West (coach: Graham Ravenscroft) finished 4th and 9th in the women’s high jump final.

There is only one throws event indoors, and Loughborough throwers scooped up four medals from the Shot Put. Competing in the men’s Para Shot, Zak Skinner (coach: Aston Moore) and Joshua Bain (coach: Kevin Bain) won silver and bronze to World Record holder in his classification, Harrison Walsh from Cardiff Met.  First-year George Hyde, (coach: Stuart Carlaw) still an Under 20, won his first BUCS medal with a fine bronze. Multi eventer Ellen Barber (shot coach: Shaun Pickering) showed that the shot put is one of her stronger events by throwing just shy of her 13.03m PB to win bronze in 13m. Fellow multi-eventer Natasha Smith (shot coach: Shaun Pickering) followed up her PB of 11.72 in the qualifying rounds to finish 8th in the final with 11.16m.

Not to be outshone by their field event counterparts, Loughborough’s track athletes were obviously in a medal-winning mood of their own. Fresh off the plane from her 3rd place finish in Armagh’s 3k road race, Amy Griffiths (coach: Rob Denmark) showed her superiority over the 1500m to win in 4:22.88 beating fellow GB Internationals Eloise Walker and Khahisa Mhlanga in the process. Rosie Johnson (coach: George Gandy) finished the final in 8th place. David Sheldon (coach: Lewis Moses) competing in his first indoor season since 2014, ran a season’s best 3:56.59 in his semi to make the final where he too finished in 8th place. Luke Farrant (coaches: Chris and Sonia McGeorge), running in the 800m, ran a PB 1:52.09 in his semi-final to make it to the final where he finished 5th, running another PB of 1:52.03.

Four Loughborough athletes made their respective 3000m finals, with Grace Carson (coach: Bill Foster) picking up a bronze in the women’s event and Kirsty Walker (coach: Bill Foster) finishing in 11th place. Tom Mortimer (coach: Christopher Brown/George Gandy) and Max Heyden (coach: Mick Woods), two of the youngest in the field, finished 6th and 11th in their first BUCS Indoors 3000m final, with Mortimer running an 8:18.48 PB in his heat to make what would end up being a stacked final.

In the sprints, Hannah Brier (coach: Glyn Hawkes) navigated the tough timetabling of three 200m rounds in one day to take silver with 23.94 and to dip under 24 seconds for the first time indoors. Ben Paris (coach: Joe McDonnell) ran an outright PB of 21.59 to take him to the final of the men’s 200m where he finished in 6th place with 21.89.

With a strong tradition in the quarter-mile event, Loughborough continued that success with medals from World Relay GB representative Alex Haydock-Wilson (coach: Mike Baker) who took gold in 47.50, Aidan Leeson (coach: Glyn Hawkes) who picked up a bronze in 47.93 and Zoe Pollock (coach: Nick Dakin) who won silver in the women’s event with a new PB of 54.38. Hurdles specialist Nessa Millet (coach Nick Dakin), coming in as a late substitution mid-week to cover an injured athlete, finished 5th in the 400m final, running 56.64 to back up her 55.66 semi-final time.

After such a successful display in the sprints, relay medals were quick to follow, with the women’s team of Shannon Malone (coach: Gyn Hawkes), Hannah Brier, Natasha Harrison (coach: Alex O’Gorman) and Lauren Brzozowski (coach: Nick Dakin) taking the win in 1:38.94. The men’s team of Matt Buckner (coach: Tony Hadley), Chris O’Donnell (coach: Nick Dakin), Alex Haydock-Wilson and Kris Jones (coach: Glyn Hawkes) were beaten to silver by a sensational Sheffield Hallam team, who took over a second off the 13-year Championship Best Performance. Loughborough’s time of 1:26.37 would have been good enough to win gold at every BUCS since the CBP was set (by Loughborough) in 2007.

25 medals and finalists in almost every event meant that overall success in the men’s and women’s Championships was never in doubt, and Loughborough retained the two trophies for another year.