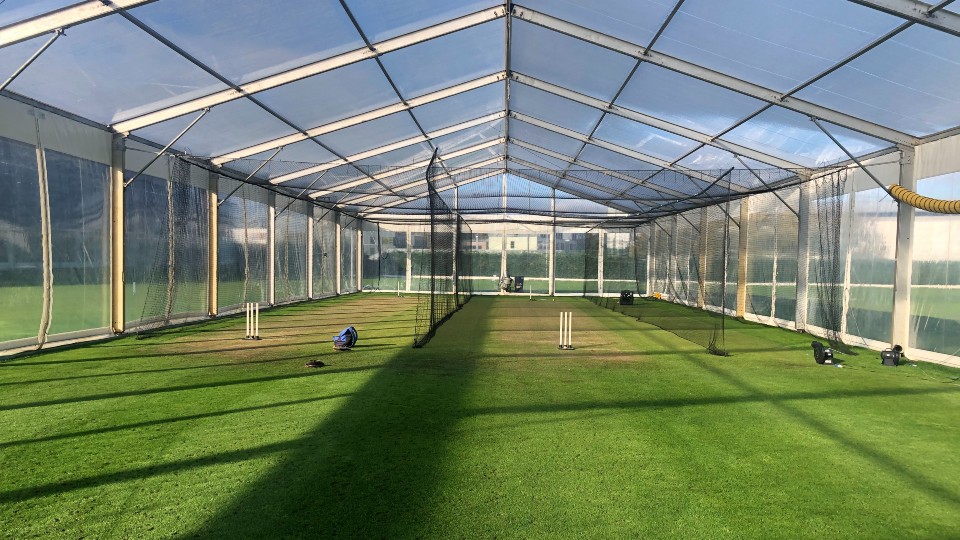 If England Cricket has ambitions to top the ICC’s World Test Championship, they will have to do well in the Covid-postponed Test Series in Sri Lanka early in the New Year.

This is an ambition potentially frustrated by not being able to practice or return bowlers to match intensity on grass due to international travel bans and quarantine restrictions – however, a team at Loughborough have helped deliver this vision.

Loughborough-based ECB Performance Operations Manager Dr Guy Jackson explained, “that’s where Loughborough and the Marquee we’ve introduced over several winters on some of the University’s pitches comes into the spotlight.

“Working with Will Relf (Sports Grounds Manager) and his Loughborough team of groundstaff, we’ve experimented over the last few years, and perfected, the ability to maintain grass wickets into the winter- a technology now copied elsewhere usually for pre-season training.”

But never has the team attempted to keep ‘the Tent’, as it’s affectionately known, operating for several months, through accumulated knowledge, attention to detail, and the hard work of the Loughborough grounds crew, and never before has this been so critical to the ECB’s ambitions to be the leading Test Cricket nation.

“We’re already at a disadvantage in terms of the period that we can train on grass in the UK, and by now in a ‘normal year’, we’d be somewhere like Abu Dhabi preparing the guys for the Series to come – this winter crucially in Sri Lanka and India – departing straight after Christmas. Travel restrictions and the touring schedule mean that there is far too little time before the first competitive matches to prepare solely in Sri Lanka.”

The marquee, which covers four pitches of the Haslegrave Ground, measures 15 metres wide and 55 metres long and allows bowlers a full run-up to ensure they can train at maximum intensity. The space is designed to replicate a regular summer outdoor training session.

Will Relf and his team use a combination of ground-keeping techniques and specialist equipment to ensure that the environment performs as an elite level outdoor pitch – irrespective of the Loughborough winter.

Although the preparation goes on throughout the year, the final pitch preparation is carried out in September, and in early October the external marquee covering was erected with the nets also assembled inside. The pitches are dried using a combination of dehumidifiers, heaters, and lighting rigs to create a warm environment with temperatures inside the venue roughly plus eight degrees to that outside.

The LU grounds team undertake a vigorous daily regime of mowing, rolling, cleaning and repair work, which keeps the pitches in prime condition for international-level cricket practice for Joe Root and his team.

“This is the only facility of its kind at this time of year and will be the first time anyone has attempted to maintain this level of practice facility through to December,” explained Will.

“If you think about it, these are the only grass pitches available at this end of the northern hemisphere!”

“We’re extremely proud to be able to produce grass pitches at this time of year and feedback the from England’s players and coaches has been overwhelmingly positive.”

“Our relationship with Loughborough University has always been a fantastic model of a mutually beneficial sports partnership. On this occasion, we’re indebted to the University groundstaff for supporting our desire to keep this facility running right up to our 2nd January departure for Sri Lanka.

“Given the current Covid constraints and challenges with overseas travel, there was simply no other option that would have facilitated an appropriate level of preparation before an important tour to the sub-continent.

“It’s fair to say that we’ve pushed beyond boundaries with this and having players training on grass in the UK at this time of year could literally be a first for cricket, which is great. The University’s efforts are hugely appreciated by Players and Staff and it’s this type of innovative collaboration that we should all continue to strive for.”

The marquee is due to come down in early January. Next year, plans are in place to stitch plastic grass into two pitches to improve their use-time yet further.  Once again, this technology showcases some of the first experimental Cricket pitches created at Loughborough through the partnership between University and ECB.