Lightning lose out to Saracen in a final thriller of 2020 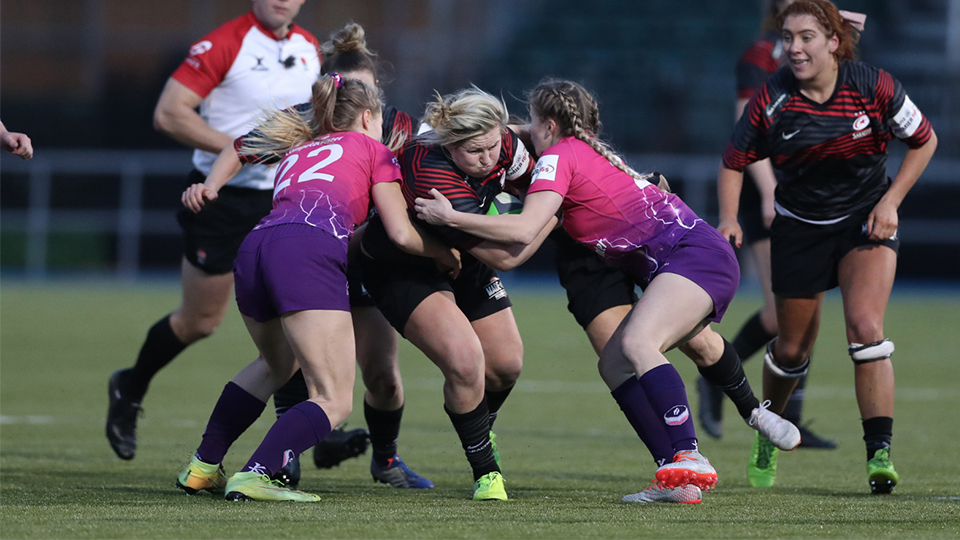 Lightning was edged out of the win 24-29 after a thrilling game at Copthall Stadium in the closing game of 2020.

From the start, the final game of 2020 was electric. It took just 5 minutes for the home side to cross the whitewash after the ball was sent wide, beating Lightning on the wing.

Responding quickly, a pinpoint kick from Helena Rowland allowed Lightning to attack from 5 metres out. The Lightning line out was slick and Lark Davies crashed across the line with ease to even the score only 3 minutes later. A calm Emily Scarratt added the extras and the away side took the lead 7-5.

With the try's coming thick and fast, it was Saracens turn to score next.  Breaking a Lightning tackle on the 22m Zoe Harrison weaved her way to the line, dotting down for her team.

As the clock moved into the final minute, a Saracens penalty saw them move 5 meters out from the try line. Unable to hold them back, the Lightning defence crumbled and Saracens closed the gap as the halftime whistle blew.

Within seconds of the kick-off, Saracens where on the attack. A try-saving tackle by Helena Rowland could only stop the attacking onslaught for moments before the home side sent the ball wide, seeing captain Lotte Clapp score and putting her side into the lead.

Unforced errors from both sides saw the ball change between hands for the next 10 minutes. However, it was the Saracens maul that struck. Reacting quickly off the back of the scrum the home side found themselves meters away from the line and the forwards did the rest, extending their lead to 5 points.

Unable to convert Lightning found themselves stuck, getting held up over the line or fumbling the ball at the crucial moment, gifting possession to the home side.

Try as they might, Lightning could not get the final score of the game, and Saracens took victory 24-29.